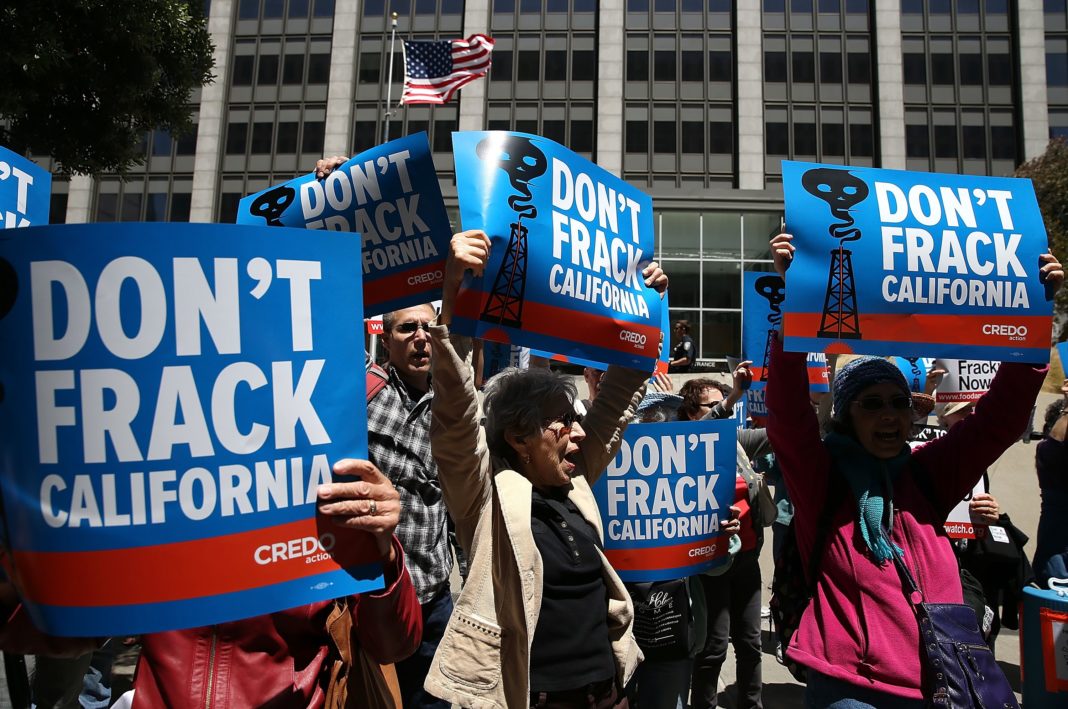 Protestors stage a demonstration against fracking in California outside of the Hiram W. Johnson State Office Building on May 30, 2013 in San Francisco.

LOS ANGELES — The Trump administration’s plan to open up more than 1 million additional acres of public and private land in California to fracking is raising alarm in the environmental community.

Environmentalists are challenging the proposal as “dangerous” to humans and iconic national parks nearby, including Yosemite and Sequoia-Kings Canyon National Parks.

Last month, the U.S. Bureau of Land Management issued a draft supplemental environmental impact statement on the plan that includes using hydraulic fracturing, or fracking, to extract oil and gas from eight central counties in the state.

“The risks posed to our national parks by further oil and gas development, particularly these iconic treasures that helped to inspire the modern-day conservation movement, is saddening to say the least,” Mark Rose, National Parks Conservation Association’s Sierra Nevada field representative, said in a statement. “Yosemite, Sequoia and Kings Canyon already experience some of the worst air quality within the park system, posing unprecedented threats to visitors and the natural resources that call these places home.”

Rose further warns that allowing more “fracking near these treasured lands and the more than 1 million acres spanning from the Central Valley to the coast could be disastrous for our national parks, surrounding communities and other public lands.”

California now ranks as the seventh largest state in terms of crude oil production, after being in third place until 2016. The state has already issued 121 permits for fracking so far this year, according to the California Department of Conservation.

“Our concern is that the Trump administration is planning to open up California to fracking and dangerous drilling at all,” said Clare Lakewood, senior attorney with the Climate Law Institute at the Center for Biological Diversity, an environmental group. “We know that Californians don’t want it. And yet we see they’re pushing this through.”

In announcing the plan, the federal agency said “this effort supports the administration’s goals of promoting environmentally responsible development of oil and gas on public lands, creating jobs and providing economic opportunities for local communities.”

The supplemental environmental report was released April 25, but the administration indicated last August it wanted to open up more public lands to fracking.

“California, in particular, we use almost 2 million barrels of oil every day,” said Bob Poole, director of production, state and coastal issues for the Western States Petroleum Association, an industry trade group. “We have 40 million people, we have 26 million combustion engines on the road — and so we have a significant challenge in terms of meeting our energy needs.”

Even so, some environmentalists warn the fracking is in counties where there are seismic risks. For example, one of California’s 10 largest earthquakes was a magnitude 7.3 quake in 1952 along the known fault in Kern County, where commercial oil and gas activity has been underway since the 1860s.

“One of the problems in California is that it is so seismically active already that it’s been difficult historically to link seismic events to particular injection projects, which is what you see in other states,” said Lakewood.

“There is no reason to believe that the science that shows the disposal of drilling fluids induces seismic events is not also happening in California,” Lakewood said. “It should be even more concerning here because of our underlying fault lines.”

Lakewood charges that the released environmental report “is an effort by the administration to minimize any of the harms and impacts. They are also downplaying the climate risks, and they are downplaying the risks to water contamination.”

The oil and gas industry counters that the seismic risks are exaggerated by environmental groups and others and that California already has a very stringent permitting process in place.

“There just isn’t any verifiable science behind some of the claims that are being made about hydraulic fracturing,” said Poole. “One of the key components of getting a permit in order to do this well stimulation is that there can’t be any faults or seismic potentialities anywhere.”

Poole also challenges claims about water contamination from fracking while pointing to regulations in place.

“We feel this is an important tool that we can use to help us to that sustainable energy future, as other forms of energy are evolving. But to use rhetoric based on unfounded facts, to somehow say hydraulic fracturing is dangerous, just doesn’t make sense given the context.”