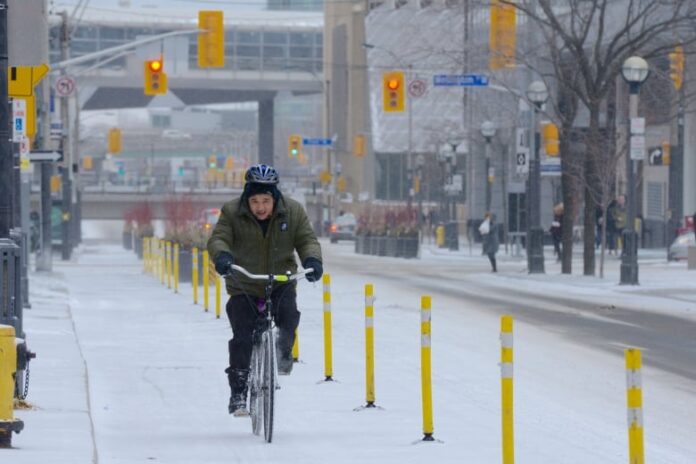 Road safety advocates are calling on the city to accelerate its plan to install more protected bike lanes as a new report finds that Toronto is falling behind on its commitment to expand safe cycling across the city.

In a report released Tuesday, Toronto Community Bikeways Coalition (TCBC) found that despite city council’s approved plan, which calls for the installation of 100 kilometres of new protected bike lanes by the end of 2024 — an average of 33 kilometres per year — roughly 13.1 kilometres of bike lanes were opened in 2022.

“We’re raising the alarm about a pattern that we’ve seen in the past in terms of the city setting out what is needed for cycling safety, but then not delivering on it,” said Albert Koehl, coordinator of the Toronto Community Bikeways Coalition.

“At this rate, the city will clearly fail to meet its road safety, cycling, and climate goals.”

According to a TCBC analysis, “critical bikeways” needed to achieve a city-wide cycling schedule are behind schedule. The report notes the project to extend the Bloor Street bike lane to the west from Runnymede Road to Royal York Road is set to be completed in 2023, but there have yet to be any public consultations for a proposed design.

The 2022-2024 Near-Term Implementation Program was approved by city council in 2021, with the cycling department’s annual capital budget raised to $20 million but despite that, Koehl said there is no “proportionate increase” in the number of kilometres of bike lanes in Toronto.

“[This] comes as the popularity of cycling in Toronto continues to grow, demonstrated by the substantial increase in Bike Share usage, the proliferation of deliveries of food and other products by bike, and a surge in the use of electric bikes,” the report said.

Saurabh Sharma, cyclist and former Uber Eats bike courier, said as someone who relies solely on biking to get around the city, more protected bike lanes on streets would help lower the risk of injury for cyclists and food bike couriers.

Sharma said he feels more safe using protected bike lanes, which are physically-separated lanes for bicycles that run next to motorized vehicle traffic, but many of the residential streets he takes do not have them.

“Every time I leave my house, I feel like there is a risk and, like, that’s all, you’ll be prepared for it. When I was doing Uber Eats, I used to wear a safety vest, I used to wear a helmet with lights … you have to take all the precautions because you don’t know what can happen on the streets.”

Biking advocate and lawyer David Shellnutt said he hopes the report is taken in good faith by the city.

“We hear a lot about green initiatives, safe streets and and that kind of thing but if we’re not keeping up with our own set plans to build protected bike lanes, then it appears to be lip service at best,” Shellnutt said.

“When you separate automobile traffic from other vulnerable road users, incidents of death and serious injury plummet.”

CBC Toronto has reached out to the City of Toronto, but did not receive a response.

Mark Fernando, TCBC organizer, called on Toronto Mayor John Tory and city council to “honour their commitments” by increasing the pace of bikeway installations under the 2022-2024 plan.

“This would be a win-win: increased safety for pedestrians and cyclists combined with a major contribution to the city’s goal, under its accelerated climate action strategy, to reduce the city’s greenhouse gas emissions to net zero by 2040,” Fernando said.

The report also notes that other cities with similar road safety and climate goals have made safe cycling infrastructure a priority.

“Montreal, despite a smaller road network and colder climate, installed about 40 kilometres of new bike lanes in the past year alone, part of its ongoing commitment to cycling safety and an already extensive cycling network,” it said.

Koehl said he hopes the city can double down on its current plan in the meantime, in order to meet its goal for 2024.

“At this point we’re saying implement the bike plan and accelerate what you’re doing so far because it isn’t working,” he said.