ER closures across N.L. mean last year’s problems will only get worse in 2023, health-care providers say 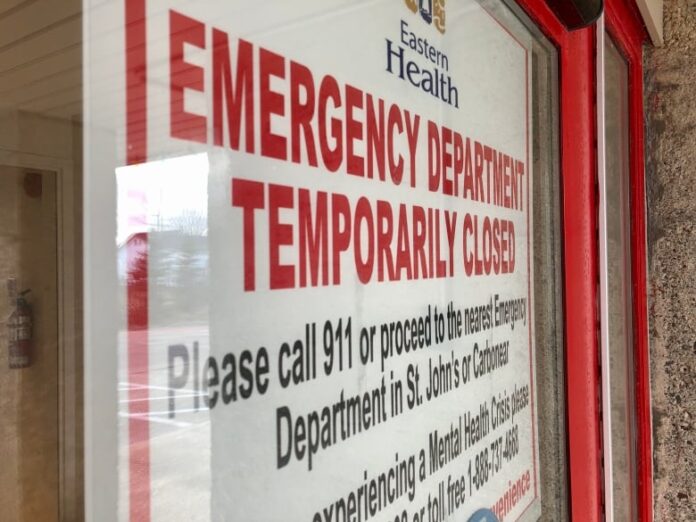 As the clock struck midnight on New Years Eve, six emergency rooms in central and eastern Newfoundland were closed due to staffing shortages.

The closures marked the culmination of a year where emergency rooms in some rural communities began closing more frequently and Newfoundland and Labrador’s health authorities relied more heavily on virtual care.

The emergency room in New-Wes-Valley has been closed since last week, and is scheduled to remain closed until at least Wednesday. Michael Tiller, who doubles as both a paramedic and the town’s mayor, said the impact has been “tremendous.”

Tiller said when the emergency room in New-Wes-Valley closes, paramedics are forced to drive drive patients an extra hour and a half to Gander — where they might take hours to offload patients because that hospital is so busy.

He said the deterioration of health-care services at the health centre in New-Wes-Valley is distressing for residents, health-care workers and municipal leaders alike.

Tiller said the town has a meeting with Health Minister Tom Osborne on Thursday.

On Bell Island, where the emergency room shut down for six days from Dec. 24 to Jan. 2, pharmacist Kara O’Keefe said she found herself acting as the sole health-care provider for about 2,700 people. Patients called, wondering what to do about shortness of breath and other problems.

“When you’re the only person who’s available for that many patients, you’re expected to take on jobs that are not really yours,” she said.

“When you close down an emergency room and access to a physician in a community of 2,700 people with an aging population, that can lead to some pretty severe health outcomes,” she said.

She said Eastern Health has two ambulances on-call on Bell Island to pick up patients, but those patients then have to take a ferry to Portugal Cove-St. Philips before going to St. John’s. O’Keefe said the journey can take an hour or two on a good day — that doesn’t account for weather delays.

O’Keefe said though pharmacists can’t be expected to take on the responsibilities of other health-care professionals, they could play a larger role in the province’s health-care system.

“We have young health-care professionals who are graduating with the skills to common ailments that don’t necessarily need to be in an emergency room or a primary care clinic,” she said.

The emergency room in Springdale is closed until Jan. 4. Dr. Todd Young, physician lead at the Green Bay Health Centre, said recent closures are due to a shortage of both nurses and doctors.

“What that tells us is both the scope and the demand itself is certainly increasing,” he said.

He said a shortage of nurses in Springdale caught him off guard — only six out of 15 nursing positions at the Green Bay Health Centre are filled. He said the facility needs a clear plan for nurse and physician recruitment.

“2023 is actually starting off a little worse than last year, and that is quite disheartening.”