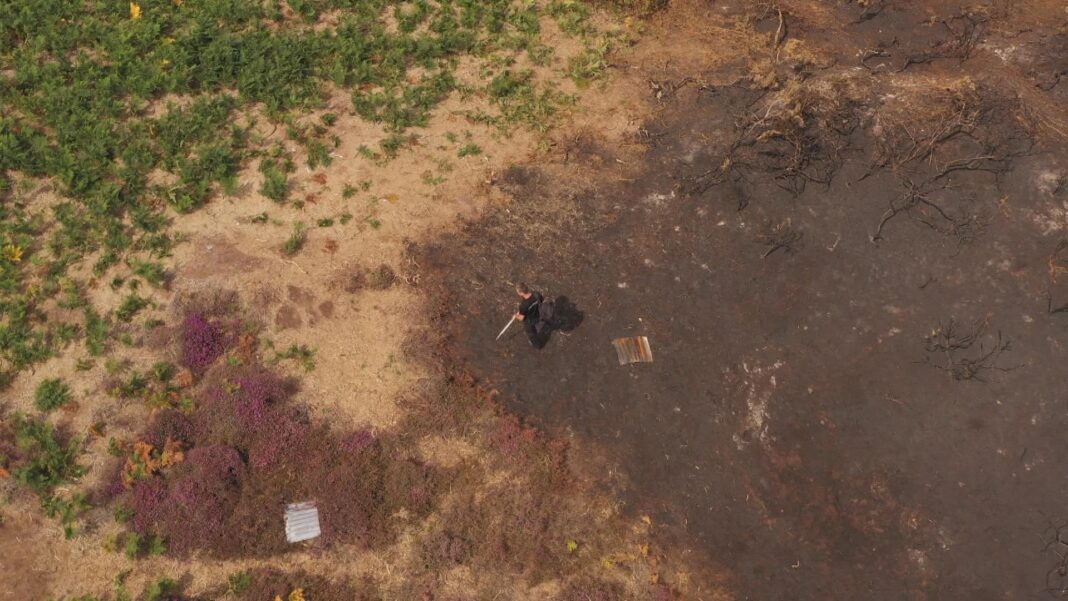 Andy Elliott trudges up a hill through a large, blackened patch of the heath lands in the Dorset countryside where he and a crew of firefighters put out a wildfire the week before.

Charred branches reach up from the soil like antlers made of coal.

“Fire conditions across the U.K. are really extraordinary, and particularly in the southeast of England,” Elliott said. “We would use the word extreme.”

The firefighter and wildfire researcher with the University of Exeter says that though the U.K. has always had lots of small wildfires, they’re now seeing blazes become larger and more intense, threatening lives and homes.

Elliott leans down to put a soil moisture gauge in the ground and reaches into the brush to collect crisp leaves and brambles which he places in a bag. These samples will be taken to a university lab where they’ll be ignited under controlled conditions to measure how flammable they are and how they could fuel a fire.

It’s all part of a project involving universities and researchers across the U.K. to adapt a national wildfire danger rating system based on the Canadian Forest Fire Danger Rating System.

WATCH | How a Canadian-made system is helping U.K. wildfire researchers: 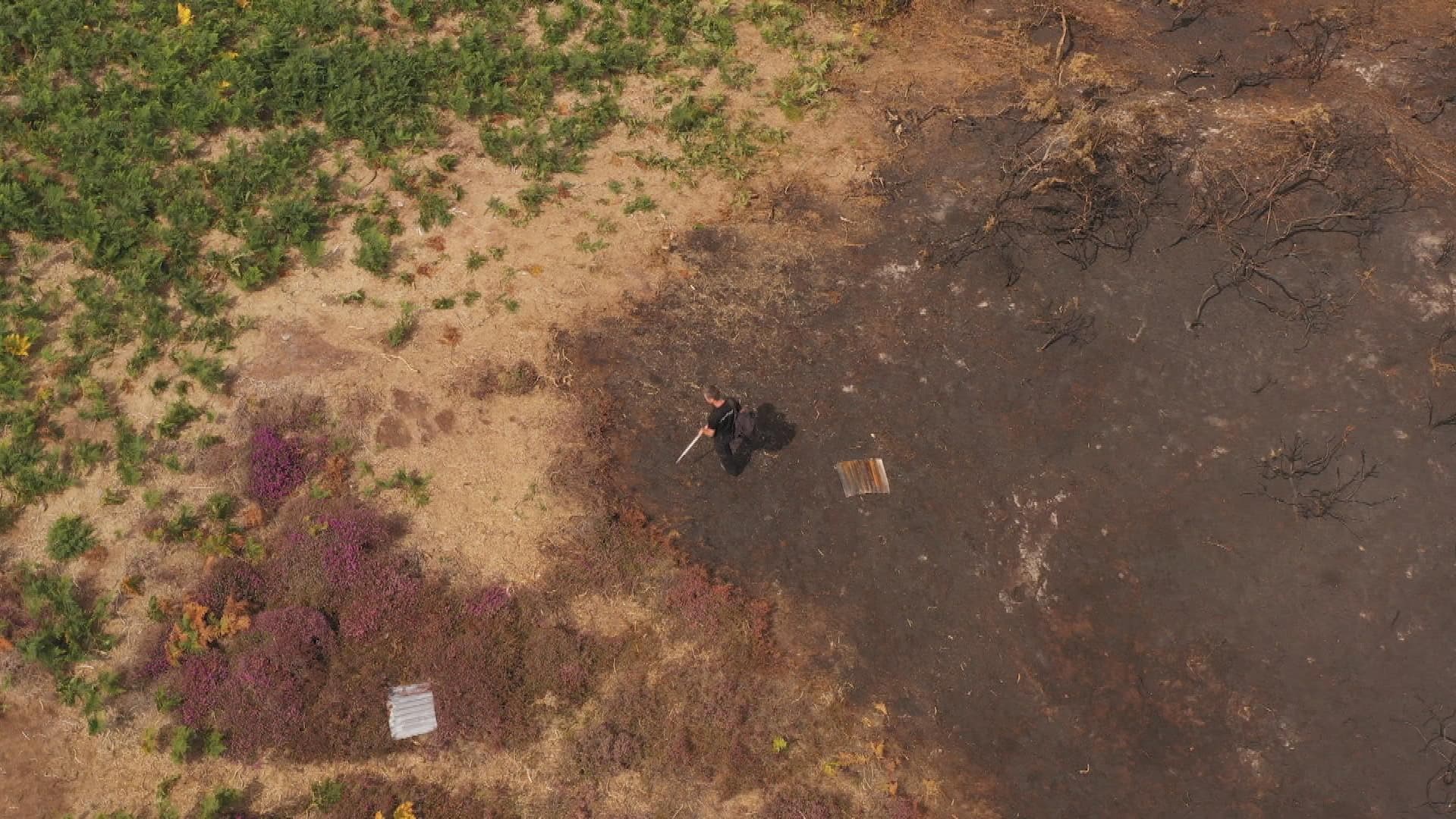 Amid this summer’s record-breaking temperatures and destructive fires, U.K. researchers are developing a national wildfire danger rating system based on a Canadian model. Scientists in Canada hope that research could also help improve the decades-old system at home.

“The U.K. doesn’t officially have a fire danger rating system as such,” Elliott said.

Elliott and the teams working across the country hope to change that by adopting the Canadian system to create a single source of high-quality information for fire officials to use to plan and warn the public.

Because there are such a diverse number of ecosystems in the United Kingdom, teams in different areas have had to split off to do field work.

“Fuels are different across the U.K. We recognize that they change with latitude,” Elliott said.

“So all of that is being looked at and measured at the moment so that we can give a system that will be, we hope, publicly available, that we hope will be used by the responding emergency services.”

For roughly a century, researchers and public safety workers in Canada developed various measures and scales to anticipate the degree of forest fire risk. But it was in 1968 that Canada first established its national Canadian Forest Fire Danger Rating System.

Mike Wotton, a research scientist with the Canadian Forest Service and a Forestry professor at the University of Toronto, is one of the Canadians helping U.K. researchers modify the model for their country.

“It’s the common tool that’s used across Canada day in, day out of the fire season to give fire managers a sense of what the situation out in their forests is, essentially, in terms of the potential for fire to happen,” he said.

The model seizes on a number of metrics to anticipate fire risk, which is then shared with fire and emergency officials.

“Things like the dryness of forest fuels, how fast fires are going to spread, what the intensity or the flame size that one might expect on any fire that started,” Wotton said.

Canadians might be familiar with the front-facing public information end of the system. Anyone driving into woodland areas will have seen the large billboards with an arrow pointing to the current fire risk level.

The U.K. isn’t the first country to study the Canadian model to create its own early warning system, and Wotton said it’s well known globally.

“We’ve worked with New Zealand quite extensively and Indonesia, Malaysia … We’re working quite closely with the Swiss right now in helping them adapt the system.”

The U.K.’s work to specialize its fire danger system may also benefit Canadian researchers — in particular some work being done by Elliott in the heathlands where the terrain and vegetation are similar to shrublands in Nova Scotia and Newfoundland and Labrador.

“Fire management agencies out there are challenged with predicting fire,” Wotton said. “We’re hoping we can take some of what they learn and apply it here in some fuel types that we haven’t been able to carry out our own experimental burning or research on.”

He said the innovations of the U.K. teams have also provided an opportunity to refresh the Canadian system, which has been relatively unchanged in the last 50 years.

“It’s long overdue for an upgrade in incorporating some of the new things that we understand about fire science, building a more flexible system,” he said.

“I’m hoping some of the things that we see this group in the U.K. doing well will give us some ideas about where we can take the system here in Canada as well.”

Wotton is full of praise for the way the U.K. teams are adapting the system, and said he was impressed with the robust nature of their testing and field work.

“They’re doing it right and not just doing academic science, but they’re getting out and doing burning across the country, linking up with partners on the ground who are fire managers so that they can build the right tools for helping those first responders.”

Speed of the essence

For Elliott, who wears both the hat of a researcher and a fire responder, finalizing a national system can’t come soon enough.

“These are landscapes I’ve lived in all my life growing up and absolutely love, and to see them being destroyed by fire is just heartbreaking,” Elliott said. “I gain comfort from the fact that we are researching that and we are making progress.”

The project has another year of research and data collection ahead of it before a national system could be adopted, he says. 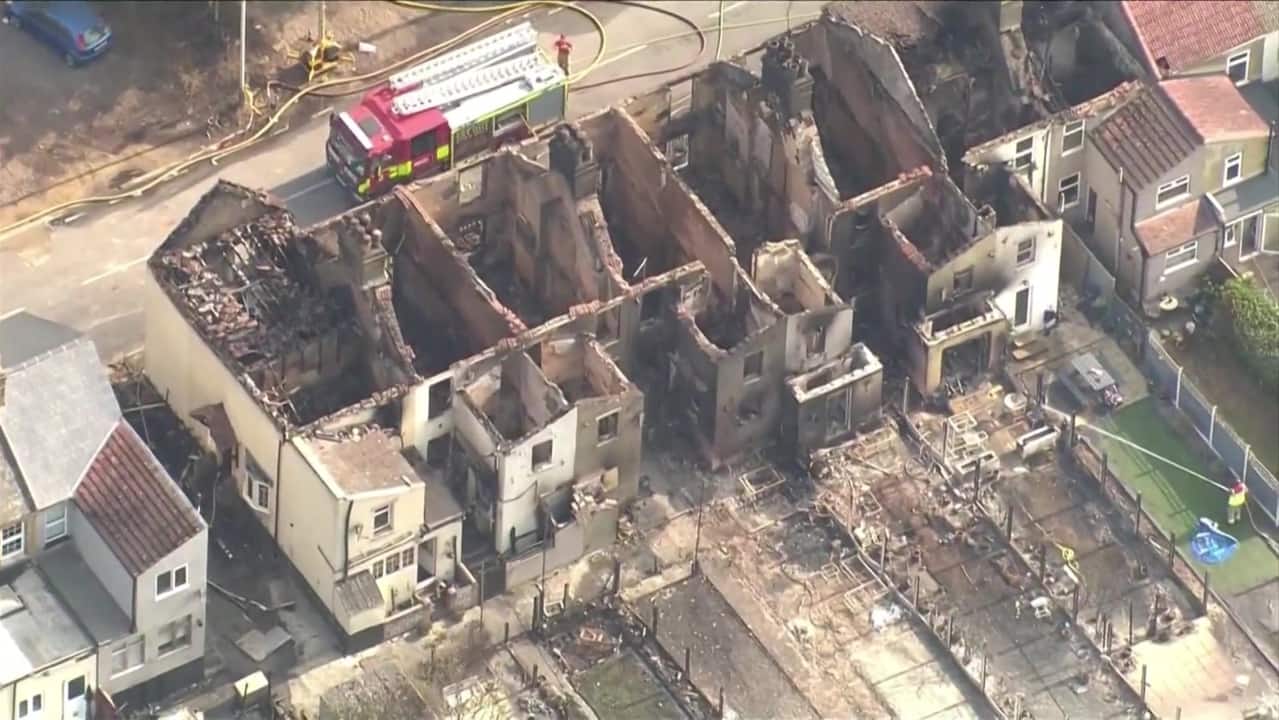 Wildfires destroy dozens of properties in village outside London

Wildfires forced residents of Wennington, a village outside of London, to evacuate as their properties were destroyed.

But given July’s record-breaking temperatures, which hit above 40 C for the first time in the country’s history, and the 41 London homes that were subsequently destroyed by wildfire, Elliott believes the system will become an important tool.

“The rate of change may have surprised a few of us, particularly with the recent events, but we are moving in the right direction and the fire danger rating system will really help our understanding of that.”