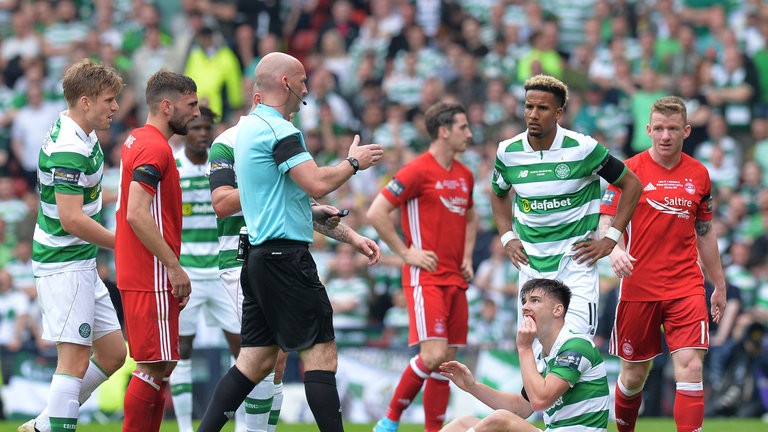 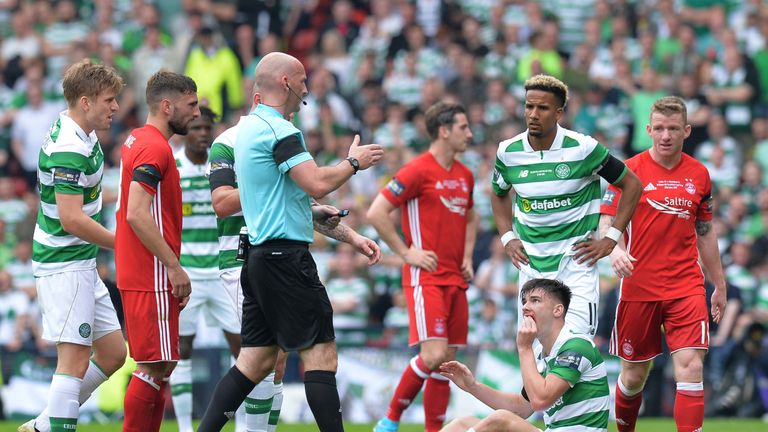 Gordon Strachan confirmed that Kieran Tierney is having a gum shield made for Scotland’s 2018 World Cup Qualifier against England at Hampden Park on Saturday.

The Celtic left-back was substituted in the first half of the Hoops’ 2-1 William Scottish Cup final win over Aberdeen on May 27 after being on the end of a flailing arm, albeit he returned from the hospital in time for the trophy presentation.

Speaking at the Scots’ Mar Hall training ground, Scotland boss Strachan said: “He is fine but he told me last week he would be fine.

“It is just a matter of getting a gum shield made. There is no pain there really, it is just making sure he doesn’t get a knock in that area. But he is ready to go.

“He joined in some of the training this morning, wanted to do a bit more but we thought ‘better not’, just in case we have an accident, but he is in a right good place at the moment.”

Two players missed out on training, striker Leigh Griffiths, who was not feeling well and midfielder Darren Fletcher who played in Michael Carrick’s testimonial on Sunday, although Strachan has no concerns over either.

The Scotland squad is at various stages of fitness after a disjointed end to the season but Strachan stressed the attitude was inspiring.

He said: “It was absolutely, completely different to what you think.

Scotland manager Gordon Strachan says his squad don’t need any extra motivation from him or his coaching team ahead of their match against England.

“At times with a coach you are meant to inspire players but the players inspired the whole coaching staff this morning.

“We put on an extra-hard session for them at the end of training and when it started everybody in the squad joined in.

“The reason being is that the players thought, ‘if they are doing we are all doing it’.

“So they came ambling across and started doing the same as the rest of the guys – much to the concern of the fitness coach may I add, who was having kittens at the time – but it just shows you that it is players who drive a group on, which was absolutely phenomenal. An inspiration.”