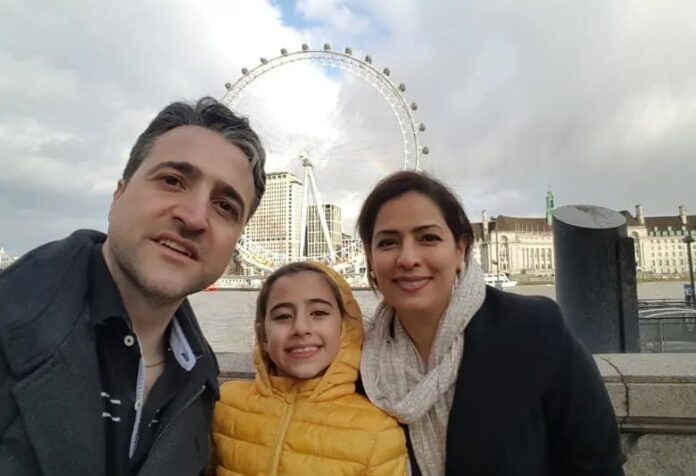 Sunday marks three years since Iran’s Islamic Revolutionary Guard Corps (IRGC) fired a pair of surface-to-air missiles at a civilian plane over the skies of Tehran, killing all 176 people onboard.

Most of the passengers on Ukraine International Airlines Flight PS752 were on their way to Canada. Fifty-five Canadians and 30 permanent residents died when the aircraft was destroyed — some of them young children.

Many of the victims’ families have spent the past three years channeling their grief into action. They say they’ve clocked about 28,000 hours of volunteer work searching for answers, organizing protests and pressing for justice.

Hamed Esmaeilion is spokesperson for the association representing the victims’ families in Canada. His nine-year-old daughter Reera and wife Parisa Eghbalian died when Flight PS752 went down.

He said the families shouldn’t have had to push the government so hard to take action, or go to extremes like hiring a former police detective and writing a 200-pages-plus fact-finding report.

“This is the first time in the history of aviation that the families of the victims have to go and find the military experts and aviation experts and provide this kind of report,” Esmaeilion said.

“This is too much on the shoulders of a grieving person.”

Prime Minister Justin Trudeau spoke to the families privately on Friday. He told them the government will stand with the families until the end, said Esmaeilion.

Still, the families have a list of outstanding demands. The government has adopted some of their demands — but not all of them.

Here is how those demands stand now.

Listing the entire IRGC as a terrorist group

The U.S. did it. There are reports the U.K. is going to do it. The European Union is considering it.

In 2018, the House of Commons overwhelmingly passed a resolution urging the government to list the entire IRGC as a terrorist organization. The Trudeau government backed that Conservative motion.

But despite the motion, and the relentless calls from victims’ families, politicians and activists, Canada’s government has not designated the entire Iranian paramilitary organization as a terrorist entity under the Criminal Code.

Justice Minister David Lametti told a press conference last year that the government fears that a terror listing under the Code would be too “blunt” an instrument. He said some Iranians are forced to serve in the IRGC in low-level roles and the government doesn’t want to target “innocent people.”

The government said it’s taking another route instead, using provisions under the Immigration and Refugee Act to target individual members of the IRGC.

“I know there are some legal complexities,” he said. “But they have had enough time to fix those issues.”

Liberal MP Ali Ehsassi, chair of the Commons foreign affairs committee, said he personally wants to see the IRGC listed in its entirety, in line with other countries.

“Given that the U.K. has indicated that they will do so, I fully expect the government will take a sober look at this,” said Ehsassi.

Victims’ families have called on Canada to launch its own criminal investigation. The RCMP has said it won’t.

RCMP Commissioner Brenda Lucki has told families the case is too difficult and complex to investigate on Canadian soil because Iran is the only country that has access to evidence gathered from the scene of the destruction in Tehran.

Nearly three years ago, Ukraine asked Canada to create a joint investigation team. The RCMP told CBC News the government’s legal advisers concluded that won’t happen because the “concept does not exist in Canadian law.”

The RCMP said its officers are instead supporting Ukraine’s investigation and sharing evidence.

The government has also released two reports examining the destruction of the plane, including an eight-month long “forensic examination.” Canada’s Transportation Safety Board also made its findings public.

Taking the case to the International Court of Justice

Along with three other countries that lost citizens on the plane, Canada announced a week ago that it would seek formal arbitration with Iran.

If countries don’t settle the dispute by the end of June, the countries can move forward with taking the Iranian regime to the International Court of Justice, a civil tribunal that hears disputes between countries.

Victims’ families say they are glad to see this happen — but it should have happened much sooner.

“Regrettably, the Iranian government has not been in the least bit cooperative,” said Ehsassi. “These processes are time-consuming and it is important for us to accept, when the prime minister says this is a priority for our government, that is exactly what our government’s intention is.”

Almost two years after Flight PS752 went down, Canada and other affected countries released a statement confirming that the regime in Tehran was not going to engage in negotiations and concluding that future attempts to negotiate reparations with Iran would be futile.

Families had long maintained that Iranian authorities would not cooperate and that Ottawa should have moved on to other legal options much sooner.

Frustrated with the government’s pace, the association representing families also has taken matters into its own hands. It put forward a submission calling on the International Criminal Court to investigate their case as a possible war crime or crime against humanity.

How has the UN’s aviation agency responded?

The International Civil Aviation Organization’s (ICAO) 36-member council (of which Canada is a member) has not condemned the destruction of Flight PS752 to date.

In contrast, the council unanimously adopted a resolution in 2014 “condemning, in the strongest terms, the downing of Malaysia Airlines Flight MH17” more than three months after it was shot down over Ukraine.

ICAO said a country would need to put forward a motion for other countries to adopt or reject.

No country has done so — Canada included.

“One hundred and seventy six people killed over there and their silence, their inaction, we cannot tolerate it anymore,” Mohammad Aminnia, whose fiancée died on Flight PS752, said at a demonstration outside the ICAO office in Montreal on Thursday.

The office of Transport Minister Omar Alghabra said it has “clearly and unequivocally condemned Iran at ICAO Council for its actions, its handling of the tragedy and its failure to provide credible answers afterwards.”

The families also want the UN aviation agency to produce its own investigation report. ICAO said countries would first have to propose and agree to help fund such a report.

Trudeau announced this past fall the government would target the top 50 per cent of IRGC members — roughly 10,000 officers and senior members — and permanently ban them from entering Canada under the Immigration and Refugee Protection Act.

The move came after weeks of growing public and political pressure. Victims’ families held demonstrations, including one on Parliament Hill, calling on the government to prevent IRGC members and their relatives from using Canada as a safe haven.

Esmaeilon says victims’ families applauded the move but added the government announced multiple rounds of sanctions only after anti-regime protests erupted in Iran and around the world in response to the death of 22-year-old Mahsa Amini. She was arrested by Iran’s so-called morality police and died in custody in September after allegedly wearing her hijab improperly.

“When they saw tens of thousands of Iranian Canadians in these streets from Halifax to Vancouver, I think that opened a lot of eyes,” said Esmaeilion.

Since Amini’s death, Canada has imposed sanctions on 84 individuals and 24 entities in Iran “for their support of the regime’s egregious behaviour,” said Global Affairs Canada.

Alghabra’s office said it has had sanctions in place against “numerous Iranian individuals and entities since 2010” and the sanctions have been expanded “several times” since then.