The Garage Gang: Four decades of square dancing, mischief and friendship on P.E.I. 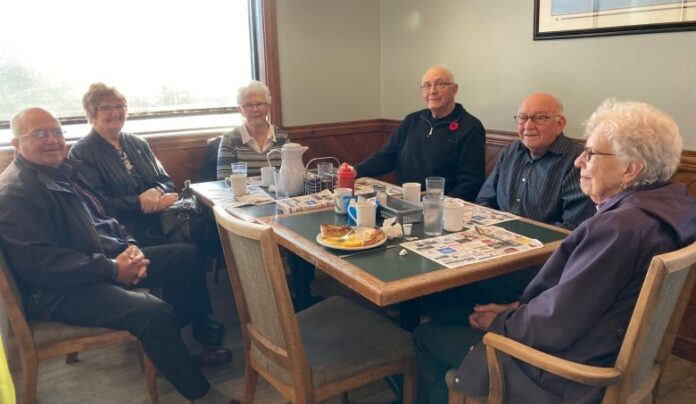 At 8 a.m. on the first Thursday of each month, the Garage Gang arrives at Sam’s Family Restaurant in Charlottetown. The tables are already set for them, their favourite server Heather having received a call the night before indicating how many place settings to put out.

“It’s all ready when we come in in the morning,” said Stan Skeffington, one of the original members of the group, and these days the de facto leader. “We’ve been here so many times that mostly now she just looks at you and says ‘the same?'”

There were originally 22 in the group, but these days, 12 of them sit at two separate tables. The seating plan rotates each month, so that everyone gets a chance to talk to everyone else.

Stan Skeffington and his wife Trudi sit at a corner table. Next to them are Myron Younker and his wife Glenn, and Virden and Naomi Robinson. A few feet away, spanning a table in the centre of the diner are Eleanor and Gerald Robinson (Virden’s brother), Joan and David Arbing, Fay Mayhew, and Rowena Brown.

Their ages range from 77 to 93, but at heart they’re as spry as the day they first met, back in the 1970s. Joan Arbing remembers how it all started. Her cousin asked Joan and her husband David to try out a new dance group at the YMCA in Charlottetown.

The group clicked instantly, and those who lived in Brackley Beach started hanging out together outside of dance classes.

“We had a lot of fun when we were dancing,” said Stan Skeffington. “So I guess between Trudi and I, we kind of hand picked a bunch of people to come out to our house just for a get-together.”

Soon, the group expanded beyond square dancing. When the couples started having children, they needed a new excuse to keep meeting up.

“Trudi got pregnant, that’s how it all started, because she couldn’t go square dancing anymore and she wanted to get together with the gang,” said Eleanor Robinson. “So we had a big, big celebration in her garage and everybody brought some food.”

The Skeffingtons say the first pot luck at their home in Brackley Beach was supposed to take place in the backyard, but rainy weather forced them into the garage.

“Somebody was wondering, ‘well, what can we call ourselves?'” Stan said. “And I don’t know who it was, somebody come up with the Garage Gang because we meet in the garage. So that’s how it happened.”

It wasn’t long until dancing turned into dinner parties. The crew solidified their friendships even further, and even got into a bit of trouble back in the day.

Glenn Younker remembers a 25th wedding anniversary surprise for one of the couples. Everyone got together at midnight and showed up in their yard, waking them up.

“We had a cake, we had a bridal bouquet made out of rhubarb. We had a minister to perform the ceremony,” she said. “And we were there until I guess about 2:30 in the morning.”

The Garage Gang fondly calls these memories their “shenanigans.”

“I think every one of us through the next few years were visited by this garage gang in some shape or form with some kind of a crazy event,” said Younker.

Stan Skeffington said there was always a younger member of the family who was in on the joke to help someone get away with their prank.

“We would get into a house and you might find most of your shoes are missing and if you want to gather them up,” he said. “You would get one at one house and the other shoe mate would be at another house.”

But shenanigans aside, the group’s main focus was always square dancing. For many years, they’d dance anywhere that would let them. In church, in a McDonald’s, on the P.E.I. ferry. They even danced in the Gold Cup Parade one year.

The Charlotte Twirlers, as they were known then, were led by square dance caller Murray Mayhew.

“He was one of the best callers in the world,” said Glenn Younker.

Mayhew would always make sure everyone got back to their partner — one of the goals of the dance. But not everyone was good at following the steps.

“Sometimes somebody would look at you if you’re in the wrong place and they say ‘What are you doing here?'” Rowena Brown recalled. “I said, ‘Just standing. I dunno where I’m supposed to go.’ But that’s how it went.”

The group’s longest-dancing member was Virden Robinson. He danced for 44 years, right up until COVID-19 came into the picture in 2020.

“Nobody, I don’t think, is square dancing right now on the Island,” he said.

Until we meet again

As the dancing came to an end, the group quickly noticed they needed a new way to stay in touch.

“We realized that in order to keep the group together we needed to go out for breakfast or something once a month,” Stan said.

But the whole gang isn’t around anymore. A few years ago, the group lost their first member, Murray Brown. His wife Rowena reads a poem the group shares each time they meet, remembering the now seven members who have died.

As the first widow of the group, Rowena says the Garage Gang was always there for her.

“My husband had ordered windows for the house, for the front of the house. And these guys came and put them in for me when he had passed away,” she said. “And you didn’t even really have to ask them — they just did it. And if ever I needed anything I knew that they would be there to help me. It’s been a fabulous group. You can’t ask for better friends.”

The Skeffingtons eventually sold their house with the garage that gave the Garage Gang its name. So these days, the meeting place is Sam’s Restaurant, where they can always order the same thing, and their months-long game of Chase the Ace provides some laughs — and an opportunity to poke fun at each other.

When asked the secret to their decades-long friendship, the Garage Gang’s advice is simple: stay in touch with good people and good friends.

A little after 9 a.m., the group begins to disperse. Some pay each other’s bills, a back-and-forth that’s gone on for longer than anyone can remember. They say their farewells until next time. No one knows which meeting may be their last, but they all make plans to meet again next month.

“I imagine we’ll continue on as long as some of us can come, and hopefully quite a few of us can continue for a few more years, anyway,” says Joan Arbing.

But of course, Stan has an idea for the Garage Gang’s final meeting — one last shenanigan, if you will.

“I once thought that we were going to get a bottle of wine and put it away,” he said.

“It may come down to just two old ladies that’s going to come in here, When it gets down to those last two that they would get this bottle of wine and they could sit and drink it. Just set it aside for that very purpose of the last two people surviving the Garage Gang could sit down, and drink it together.”