Book recovered from Franklin ship could show whether other written items are salvageable, historian says 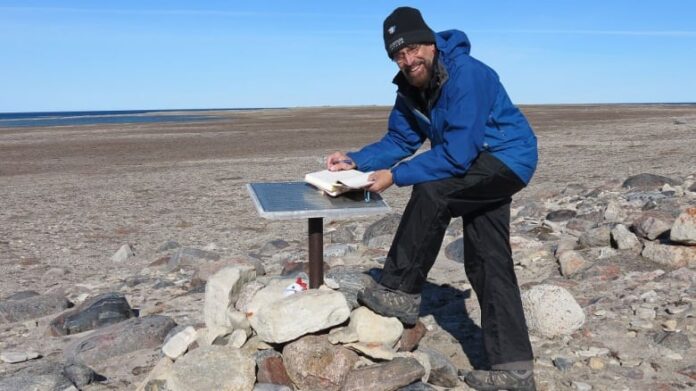 A leather-bound folio found in one of Capt. John Franklin’s doomed ships might just show how recoverable other documents might be in future searches, according to Canadian historian Ken McGoogan.

The folio — a book or diary of sorts — is among the total of 275 artifacts recovered last year from HMS Erebus, one of two ships that went missing in the 1800s in the Arctic. The other items include things such as a feather quill pen, stoneware plates, platters and serving dishes. The wreck lies 11 metres below the surface of the Northwest Passage. Even deeper is the other ship, HMS Terror.

Erebus and Terror set out from England in 1845. Commander Sir John Franklin and his 129 men never returned.

Since 2014, when Erebus was finally found (and Terror, two years later) with a combination of Inuit oral history and systematic, high-tech surveys, Parks Canada has been working to understand what is down there and what light it could shed on a story that has become part of Canadian lore.

McGoogan thinks the information gleaned from the folio, which was found in Erebus’ pantry during a diving expedition by Parks Canada archaeologists this past year, might be limited, but still valuable.

For McGoogan, one the first questions is whether contemporary conservationists can decipher what’s in the book after all that time it sat in the ocean.

Ryan Harris, who was part of the 2022 field season on the wreck of HMS Erebus, said the book, which he thinks is one of the top finds, is currently at a lab being analyzed.

McGoogan said no matter what’s written in the book, if researchers can decipher it, that would be win on its own.

“That’s interesting in itself, because if they can, it bodes very well for any future discoveries,” McGoogan said.

What would be very exciting to find in future searches, he said, would be “some kind of a logbook that might track what happened on the expedition through time,” he said. McGoogan thinks that sort of thing would likely be in the officers’ cabin.

“People have never yet got to the root cause of why this expedition ended in catastrophe.”

And he said this major question will likely remain.

McGoogan recently penned a new book, Searching for Franklin: The Royal Navy Man who Couldn’t Listen, that points the finger at Franklin himself, as a man who couldn’t listen to Northerners.

He said there are two reasons he thinks Franklin was “deaf” to the wisdom that may have been imparted to him by Indigenous people.

“First, he was a Royal Navy man to the tips of his fingers. And that made you follow your orders no matter what,” he said.

Franklin’s faith, McGoogan said, may have played a role.

“Evangelical Christianity also made him impervious to advice and counsel from anyone who wasn’t a Christian already. So, you know, he was created by his times in that way,” McGoogan said.

McGoogan said a question that has also left him scratching his head is why “such a disproportionate number of officers and crew” seemed to have died before the men left the ship. Many researchers, according to McGoogan, have come to believe that in April 1848, 105 men got off the two ice-locked ships, and that a note later found said nine officers and 15 seamen had died before that, representing 37 per cent of officers and 14 per cent of crew members.

“Now, that’s odd, to say the very least,” McGoogan said, “why so many more officers [died]  in comparison to the number of the crews.”

As for Terror, the other ship that went down, McGoogan thinks it’s possible a diary of day-to-day events may turn up from it one day during searches, as he said the ship is known to be better preserved.