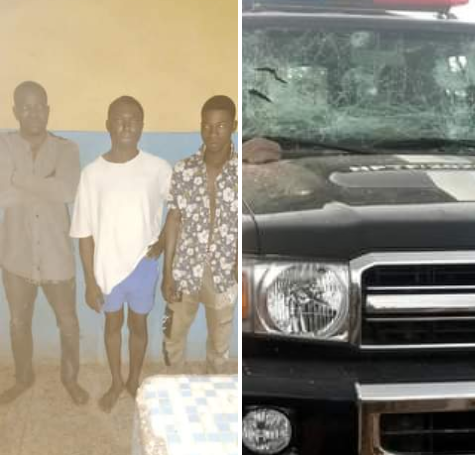 Ogun State Police Command has arrested three members of a notorious cult group who attacked a team of police officers at Mile 2 area of Lafenwa, Abeokuta on Monday, June 25.

According to the police, the cultists who belong to the Aiye cult group engaged the police officers in a gun battle that lasted more than 30 minutes.

A patrol vehicle belonging to the Lafenwa Police Division was allegedly destroyed during the attack.

The suspects: Jonathan Oshinalu, Kola Bolugbe, and Jimoh Aliu, a.k.a Alaayan were arrested, following an intelligent report received by operatives of the Special Weapons Tactics (SWAT).

A notorious cult leader, identified simply as Ben, who was initially arrested by the police, escaped during the gun battle.

Spokesperson of the command, DSP Abimbola Oyeyemi, who confirmed the incident in a statement on Tuesday, July 26, said the police officers busted the suspected cultists while they were holding a meeting to launch an attack.

“Ben, who had been involved in several cult clashes leading to the killing of not less than five persons, was holding a nocturnal meeting with his group at Ogun Radio, Mile 2 area of Lafenwa, Abeokuta, for the purpose of launching another attack in some parts of the metropolis,” Mr. Oyeyemi said.

“Upon the report, the SWAT team, in conjunction with men of Lafenwa and Ilupeju divisions moved to the area. On sighting the policemen, Ben and his deadly group engaged them in a gun battle that lasted for about 30 minutes.

“At the end of the encounter, the said Ben escaped with bullet wounds while three amongst them were apprehended”, the PPRO said.

He further stated that a patrol vehicle attached to Lafenwa Police Division was destroyed in the attack before being subdued by the superior firepower of the police.

An unregistered Lexus 330 car, being the gang’s operational vehicle, was recovered by the SWAT, the statement added.

Also read: How I Survived Depression After My Husband Took A Second Wife – May Edochie

The state Commissioner of Police, CP Lanre Bankole, has ordered a massive manhunt for the escaped gang leader and other members of the group, even as he called for a discreet investigation into the activities of the arrested hoodlums, with a view to arraigning them in court as soon as possible.