Thousands of people have taken part in a rally in Belfast calling for the legalisation of same-sex marriage.

Among those who attended the Belfast rally were Lord Mayor Nuala McAllister and Northern Ireland-born Labour MP Conor McGinn.

Last month, a bill brought by Mr McGinn to bring same-sex marriage to NI was blocked from moving to the next stage at Westminster.

Northern Ireland is the only part of the UK and Ireland where same-sex marriage is still illegal.

Deadlock over the issue has dogged Stormont for years.

The last time MLAs debated it a majority voted in favour but the DUP blocked the move using a petition of concern.

Police estimate that about 5,000 people were at Saturday’s rally in Belfast.

But Mr McGinn said the number was higher, claiming 20,000 people attending across the two venues.

“There are tens of thousands more at home who want the law changed – that’s what we’re demanding from this government,” Mr McGinn told the BBC.

The MP said there is “a huge majority in the House of Commons” who want the legislation changed.

“Westminster has a duty to legislate for equal rights in Northern Ireland. These rights are enjoyed by people right across the UK and the rest of the island of Ireland.

“With no functioning assembly, Theresa May must act.

“We can’t have inequality and discrimination for LGBT people here – we don’t have it anywhere else.

“It confirms what I’ve always thought which is that the campaign for love equality, for equal marriage in Northern Ireland, has huge support right across the community.”

Lord Mayor Ms McAllister said she was honoured that the march was her last event in the role.

“Marriage equality is just one step towards total equality for the LGBT community here,” she said.

She added: “I’m disappointed that we cannot legislate for marriage equality locally. We have too many people in the assembly who abuse power with the petition of concern.”

Ms McAllister called for the petition of concern mechanism to be changed.

“If we can’t legislate here, it has to be done at Westminster.”

What is a petition of concern?

If a petition of concern is presented to the assembly speaker, any motion or amendment will need cross-community support.

In such cases, a vote on proposed legislation will only pass if supported by a weighted majority (60%) of members voting, including at least 40% of each of the nationalist and unionist designations present and voting.

Effectively this means that, provided enough MLAs from a particular community agree, that community can exercise a veto over the assembly’s decisions.

A valid petition requires the signatures of 30 MLAs. 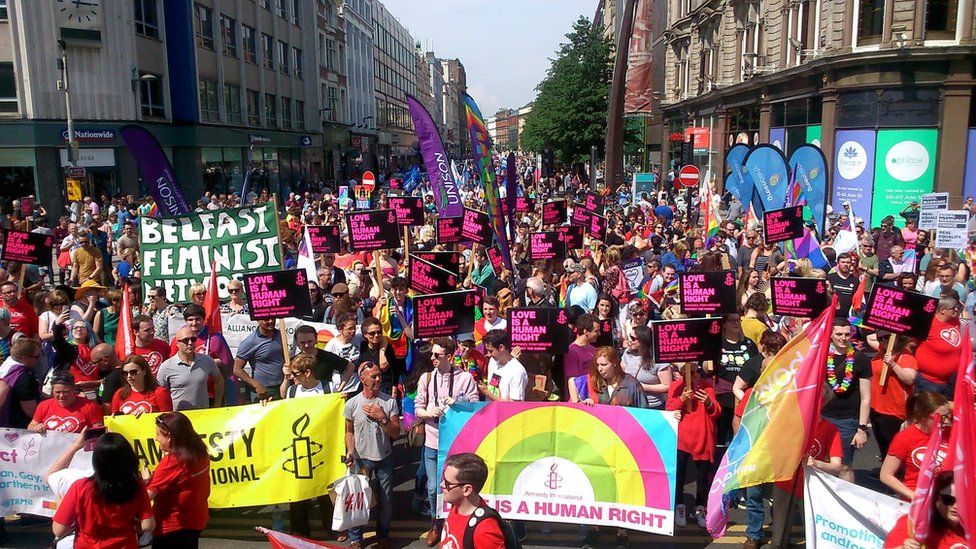