This B.C. man did not get vaccinated before getting COVID-19. He ended up in a coma 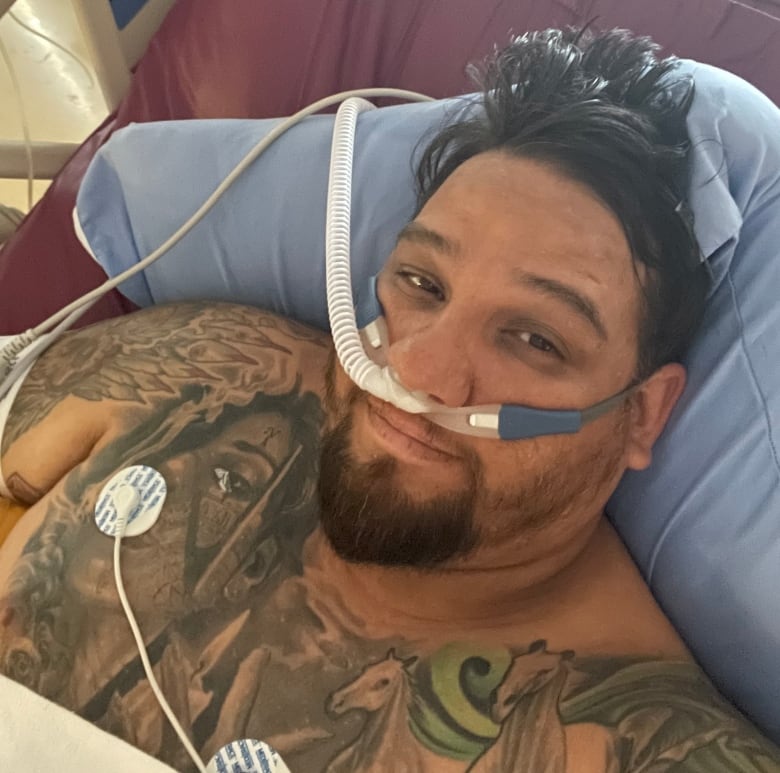 Shortly after being admitted to hospital with COVID-19, Dave Garcia made the decision to remove the oxygen tube from his nose for just a couple of minutes to make his way from the bed to the bathroom.

Moments after removing the tube, Garcia found himself coughing uncontrollably and his limbs going weak as he gasped for air. He scrambled to yank the emergency cord, calling medical staff to his aid.

“Your thoughts [are] racing through your head, ‘This can’t be happening,'” says Garcia.

The 39-year-old Merritt, B.C., resident spent 23 days in hospital with COVID-19 after choosing not to get vaccinated.

Garcia says his story serves as a reminder of what can happen to unvaccinated people who contract the disease.

As B.C. fights its fourth wave of the pandemic, unvaccinated people are 17 times more likely to end up in hospital after contracting COVID-19 than their fully vaccinated counterparts, according to data released by the Ministry of Health.

Garcia is now urging others to protect themselves and get vaccinated.

“I wouldn’t say I’m an anti-vaxxer by any means, but I was just waiting to see what was going on,” says Garcia.

He didn’t feel there was an immediate need to get the vaccine and wanted to wait and see if longer-term side effects emerged among those who had been vaccinated.

On May 20, Garcia tested positive for COVID-19 after some mild coughing, fatigue and aches and pains. He says he mistakenly thought his experience with the disease would be a breeze.

But by May 23, his cough had progressed into coughing attacks that left him breathless.

“This of course was problematic, but I was still very optimistic that it would blow over … a naiveness that I recognize now,” Garcia said in a written response provided to CBC News following the interview.

After coughing up blood, Garcia called 811, the provincial nurses’ line, and was told to go to the closest emergency room.

“I thought they would give me breathing exercises to do at home, but never thought that I would be in the hospital for the next 23 days,” says Garcia.

After he was admitted, Garcia’s health continued to decline and he was placed on oxygen.

“It was quite a shock knowing that the oxygen was going to be my lifeline,” says Garcia.

Eventually, he went into respiratory distress and stopped breathing.

Garcia was transferred on May 26 from the Nicola Valley Hospital in Merritt to Royal Inland Hospital in Kamloops, where he was admitted to the COVID-19 intensive care unit. He was put into a medically induced coma for six days as medical staff worked to stabilize him.

He was eventually discharged on June 15 and says he continues to make progress at home, where he lives with his 12-year-old son, Maddox Garcia.

After being discharged, Garcia says he called his family doctor to ask about getting both himself and Maddox vaccinated. Garcia and his son have since received their first doses.

Vaccine hesitancy continues to be an issue in B.C. months after vaccines were introduced. Provincial figures released Thursday show 75.6 per cent of residents 12 and older in B.C. are now fully vaccinated.

Some of the hesitancy comes from fears about side effects, with some people believing they’re not vulnerable to COVID-19 and others distrusting the government’s messaging.