These senators will make or break Trump’s Supreme Court nominee 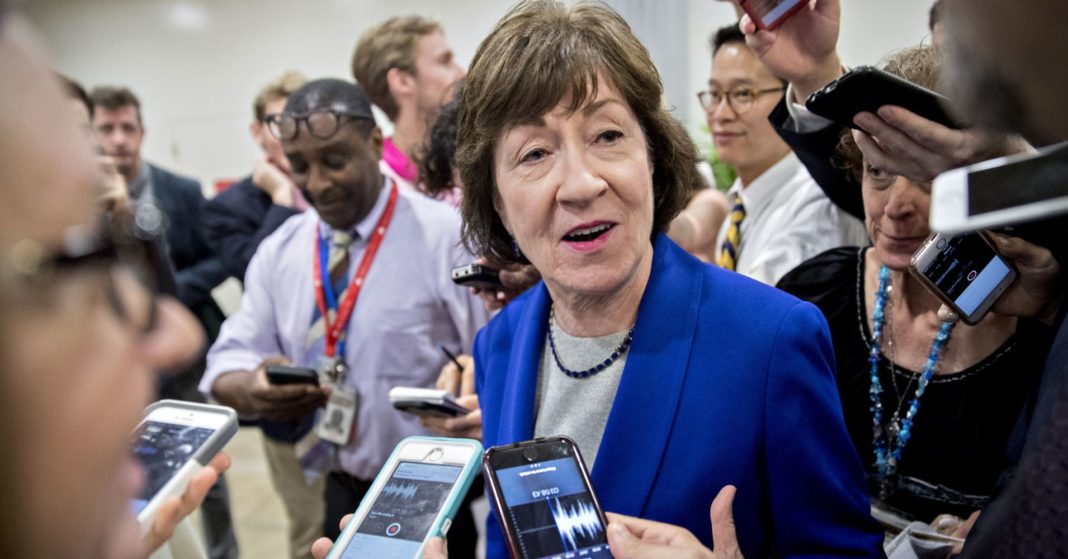 A range of factors, including the possible justice’s view on the Roe v. Wade ruling that legalized abortion and the political fortunes of red-state Senate Democrats, will determine the fate of Trump’s choice in the Senate. After Republicans ended the filibuster for Supreme Court justices to confirm Justice Neil Gorsuch last year, nominees now only need a majority of 51 votes to get confirmed in the Senate.

The GOP holds 51 seats in the chamber, but only 50 Republicans will likely vote as Sen. John McCain, R-Ariz., fights brain cancer. One GOP defection would sink the nomination if all Democrats unite in opposition to Trump’s court pick. Three vulnerable Democrats voted to confirm Gorsuch last year, and they could potentially take their cues from moderate Republicans once again.

President Donald Trump’s choice for the Supreme Court has little margin for error in a narrowly divided Senate.

The person whom the president chooses Monday night to fill retiring Justice Anthony Kennedy’s seat will have a chance to shape a broad range of American policies for decades to come. A handful of swing vote senators will get to decide whether Trump’s nominee– likely a young conservative– will even make it on the top U.S. court.

Here are several of the key senators in the Supreme Court confirmation process:

“When the president presents the Senate with his choice for the Supreme Court, I will thoroughly review the record and qualifications of that nominee,” he said after he, Manchin and Heitkamp all met with Trump late last month.

Manchin has also given little indication of whether he will back the next nominee to the top court.

” I would not support a nominee who demonstrated hostility to Roe v. Wade because that would mean to me that their judicial philosophy did not include a respect for established decisions, established law,” Collins told CNN recently.

That includes backing Gorsuch’s confirmation last year. So far, Heitkamp has said little about whether she will back the next nominee to the court.

Three other senators facing re-election challenges in states Trump won– Claire McCaskill of Missouri, Jon Tester of Montana and Bill Nelson of Florida– opposed Gorsuch’s confirmation last year. Pro-Trump super PAC America First Action is rolling out a seven-figure ad campaign that could target all of those senators, as well as Heitkamp, Manchin and Donnelly.

The Maine Republican has generally supported abortion rights and will look at a potential justice’s views on the Roe ruling carefully.

Manchin also faces a tough bid to keep his seat, running in a state Trump carried by more than 40 percentage points in 2016. The West Virginia Democrat voted to confirm Gorsuch last year.

” My standards for Supreme Court nominees are extremely high. It is my longstanding practice to carefully scrutinize the qualifications of judicial nominees and to cast an independent vote when judicial nominations come before the Senate,” Murkowski said when Kennedy announced his retirement.

She has said that she told Trump she would not support some of the potential justices on his short list of candidates. It is unclear if she expressed concerns with appellate court Judges Brett Kavanaugh, Thomas Hardiman, Amy Coney Barrett or Raymond Kethledge, the judges that Trump reportedly prefers for the seat. Collins supported Gorsuch’s confirmation.

Donnelly faces a fight for his political life in November. Along with Heitkamp and Manchin, he was one of the three Democrats to support Gorsuch.

Collins’ decision on the Supreme Court pick could very well determine the action other senators take. The court choice could potentially serve as a swing vote on whether to overturn Roe and shape the future of abortion rights in the United States.

The conservative Judicial Crisis Network also plans to roll out ads to boost the potential justice in the states of Alabama, Indiana, North Dakota and West Virginia, according to The New York Times. Jones has voted frequently with Trump’s priorities.

” I look forward to meeting with and evaluating the qualifications of whoever President Trump nominates to become a justice on the Supreme Court,” he said in a statement when Kennedy announced his retirement. “Senators have a responsibility to do our jobs as elected officials and this includes our Constitutional obligation to advise and consent on a nominee to fill this Supreme Court vacancy.”

Liberal groups will likely pressure both her and Collins to oppose whomever Trump nominates. Murkowski also voted to put Gorsuch on the Supreme Court.

” Like my colleagues, I’ll wait to see who he nominated for the position– and then get to work exhaustively vetting the nominee and reviewing and their record to meet my constitutional duty as a U.S. senator to provide advice and consent for filling this vacancy,” she said late last month, according to the New York Times.

Trump won Donnelly’s home state by nearly 20 percentage points. The senator also has given no clear indication of whether he will back the Supreme Court nominee.

Murkowski, like Collins, has an independent streak in the Senate. Both senators, along with McCain, bucked their party last year to sink a GOP proposal to repeal and replace the Affordable Care Act.

When it confirmed Gorsuch, Jones was not yet in the Senate. As he won a special Senate election in deep red Alabama in December, conservatives will certainly pressure him to support Trump’s nominee.

Heitkamp runs for re-election this year in North Dakota, a state Trump won by more than 30 percentage points in 2016. In trying to keep her seat, the Democrat has emphasized that she has voted with the president’s priorities most of the time.

The Alaska Republican has also generally backed abortion rights. She too will likely evaluate whether Trump’s choice would overturn the Roe decision.

The comment came a day after Trump held a campaign rally in the state and claimed that Heitkamp would vote against whomever he nominated for the seat.

Share
Facebook
Twitter
WhatsApp
Pinterest
Linkedin
ReddIt
Email
Print
Tumblr
Telegram
Mix
VK
Digg
LINE
Viber
Naver
Previous articleHomeowners are sitting on a record amount of cash – and not tapping it
Next articleTwitter is cleaning up its platform, and the stock is tanking