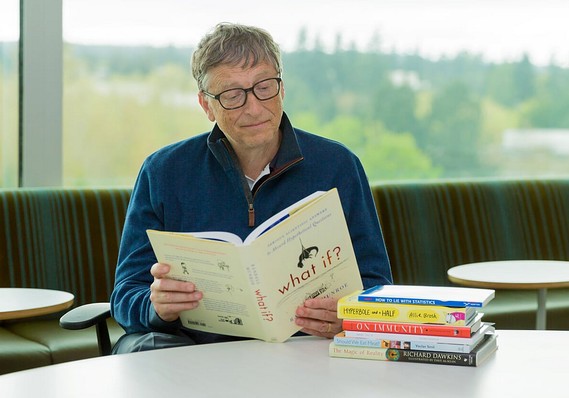 Every spring, bloggers, booksellers, aspiring multi-billionaires, and just about everyone else waits eagerly to see which books Bill Gates will recommend as summer reading. Well, the list just came out. But, looking at Gates’ choices, it’s clear he’s trying to teach us all a single important lesson this year, and the lesson is this: Learn to look beyond your own experience and point of view.

Read more: BEFORE YOU TRADE IN THE STOCK MARKET, STEPS YOU NEED

Gates himself touches on this point in his blog post announcing the list. “The books on this year’s summer reading list pushed me out of my own experiences, and I learned some things that shed new light on how our experiences shape us and where humanity might be headed,” he wrote.

Honestly, that’s something all of us need more and more these days. Social media is great, but one not-so-great thing about it is the way it’s replaced over-the-fence backyard conversations or encounters in the checkout line (which Amazon is eliminating). That means most of us now spend a growing proportion of our time communicating only with people who share our professions, backgrounds, and interests. Combine that with the extreme polarization and partisanship of today’s political climate, and suddenly we’re all living in a world where we consider large numbers of our fellow human beings to be completely alien from ourselves.

Gates’ recent book recommendations attempt to create an antidote to this deeply divided society we’re living in. Even if you think you don’t need it, even if you think you understand other people’s lives and viewpoints just fine–they’re well worth your time to read.

1. Born a Crime by Trevor Noah

Gates is a fan of “The Daily Show,” which is how he first got interested in Trevor Noah. Initially, he was looking for some lighter reading than the serious books about big world issues he normally consumes. But Noah’s book pulled him into a world most of us in the Northern Hemisphere can’t imagine: born to a white father and black mother under apartheid, Noah’s very existence was proof of an illegal relationship. “Much of Noah’s story of growing up in South Africa is tragic,” Gates wrote. “Yet, as anyone who watches his nightly monologues knows, his moving stories will often leave you laughing.”

2. The Heart by Maylis de Kerangal

This is the only novel on Gates’ summer reading list, and he warns readers to expect to cry at least a little. It tells the story of a young man who is pronounced brain dead after an early-morning car accident and his parents’ decision to donate his heart to save the life of a woman who is near death. De Kerangal has written the book from multiple points of view, that of the boys’ parents and the doctors and hospital staff. The book was originally published in France and has been beautifully translated by Sam Taylor into prose that Gates says is “closer to poetry than anything else.”

Gates doesn’t specifically mention politics, likely on purpose. But at the moment, our deepest failure to understand one another lies between the approximately 63 million people who voted for Donald Trump in the presidential election and the approximately 73 million who voted against him, either for Hillary Clinton or for a third-party candidate. The election was followed by a lot of breast-beating by elites in mostly anti-Trump coastal urban areas, who lamented their own ignorance about the challenges and viewpoints of the poor and working poor in what many disparagingly call “The Great Flyover.”

Read more:  TOP 7 BILLIONAIRES THAT IS GOOD WITH THE STOCK MARKET

Vance is an eloquent voice for that viewpoint, and although he himself is a Conservative who did not vote for Trump, he did predict earlier than most that Trump would carry the Republican nomination. His memoir tells the story of his mother’s struggle with drugs, being raised by his grandmother in his formative years, and his eventual escape via the military and a Yale law degree. “While the book offers insights into some of the complex cultural and family issues behind poverty, the real magic lies in the story itself and Vance’s bravery in telling it,” wrote Gates.

Gates notes that he recommended Harari’s previous book, Sapiens, last summer’s reading list, and Homo Deus is a sequel to that book. However, it’s worth noting that it’s the only “heavy reading” on this summer’s list, which otherwise offers three memoirs and a novel. It’s a very different sort of book, and yet it still requires the reader to consider other people’s points of view.

Harari begins by arguing that humans are well on their way to solving many of our planet’s most pernicious problems, such as famine and war. (For example, more people die from eating too much than too little.) But once we’ve mastered these huge problems, what will we do next?

“He foresees a potential future where a small number of elites upgrade themselves through biotechnology and genetic engineering, leaving the masses behind and creating the godlike species of the book’s title; where artificial intelligence ‘knows us better than we know ourselves; and where these godlike elites and super-intelligent robots consider the rest of humanity to be superfluous,” Gates wrote in his review of the book. But, he added, “I am more optimistic than he is that this future is not pre-ordained.”

Let’s hope he’s right about that. In any case, this sounds like a fascinating book.

5. A Full Life by Jimmy Carter

At 90, the former president has already written dozens of books. But, Gates wrote, “he somehow managed to save some great anecdotes for this quick, condensed tour of his fascinating life.” Carter, the son of a peanut farmer, grew up in a home without running water, a world that may be as unfamiliar to you as it is to Gates. That background, Gates wrote, shaped Carter’s time in the White House “for better or worse.”

Carter’s single term as president ended more than 35 years ago. Still, Gates wrote, “A Full Life feels timely in an era when the public’s confidence in national political figures and institutions is low.”

I’ve downloaded a sample chapter of each of these books, and I’m looking forward to reading them all. How about you?