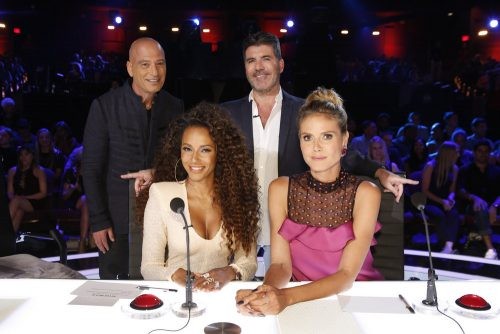 Everyone’s got their own set of concerns when the America’s Got Talent crew hits the streets ahead of week four of auditions to curb their hunger pangs.

For Howie Mandel, it’s making sure that Simon Cowell listens to any of his directions to the drive-thru. For Heidi Klum, it’s confusion over why Simon’s in the driver’s seat at all. And for Mel B and host Tyra Banks, it’s their luxurious locks.

“All this wind is spoiling my hair,” Mel complains from the backseat, trying to smooth down her sleek bob.

“At least you don’t have to worry about that if the wind kicks up, you hair flies off,” Tyra retorts from the front passenger seat. LOL!

“Well, one piece just might,” Mel says as she accidentally rips a part of the convertible’s interior off.

“Look, you’re worried about your wig coming off?” Howie asks Tyra. “A piece of the car came off!”

To see just how this quest for fast food comes to its hilarious conclusion, be sure to check out the clip above.

As America’s Got Talent heads into week four of auditions this Tuesday, the search for outstanding acts continues and two Golden Buzzers are left to send two lucky acts straight through to the live performance rounds at the Dolby Theater in L.A. to compete for America’s vote, following Mel’s press in the premiere for 12-year-old ventriloquist Darci Lynne Farmer, Simon’s press in week two for deaf singer Mandy Harvey and Howie’s press last week for formerly blind singer Christian Guardino. Which amazing act will get the lucky buzzer press this week? We’ll have to tune in to find out!

America’s Got Talent airs Tuesdays at 8 p.m. on NBC.