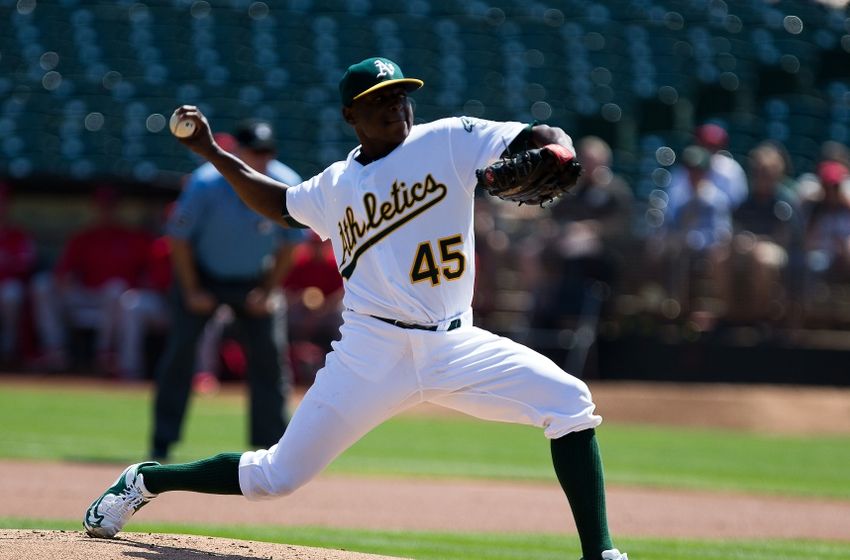 Jharel Cotton has been bad. Part of his poor season is undoubtedly on the defense, and on a better team, his ERA might be palatable. His stuff still looks pretty solid at times but he’s just not quite right.

The good news: Cotton’s velocity is roughly the same as it was last year (keep in mind MLB’s change in tracking causes its readings to be a bit different) so he appears to be healthy. So what has gone wrong?

An overall lack of control and command

In his career, Cotton has always lived in the zone. His career walk rate is just 8.4% and has trended down in recent seasons. This year? It’s at a career high 10.5% which works out to 4.18 walks per nine innings. Woof!

An interesting facet of Cotton’s control struggles is that he’s still throwing a lot of strikes. He’s just a shade below league average in terms of overall strikes thrown (62.5% vs. 63.25%) and he’s actually been in the zone more than he was a year ago (49.5% this year vs. 46.3% last year).

The difference is in Cotton’s inability to garner swings outside the zone. Last year, Cotton induced swings on 38% of his pitches outside the strike zone. That’s higher than any qualified starter in 2017! Grand.

This year that number has fallen to 25%, a devastating drop. Not grand. So while he’s still in the zone, he’s unable to get hitters to chase pitches out of the zone, producing problems. For one, his walks are up. Obvious connection there – if hitters aren’t swinging as much, there will be more called balls and more free passes.

The inability to get those swings outside the zone has to do with an inability to spot some of his pitches. A “bugs bunny” changeup is great, but if it’s bouncing five feet in front of the plate it doesn’t matter how fun it is or how much it moves. It’s not going to entice hitters. So they’re not swinging, and he’s finding himself in more hitter’s counts. Without the ability to spot his secondary stuff, he’s become a bit more predictable. Hitters can wait till those favorable counts to sit on one pitch, usually the fastball. Since Cotton can’t locate his secondary pitches a good portion of the time, hitters are right: they do get the fastball and frequently, they mash it.

The eyeball probably already told you that Cotton’s offspeed has looked so very unreliable. The change up still has that signature movement (though it’s decreased some) but he can’t seem to spot more than one in a row. He’s not missing close to the zone, not giving hitters the chance to be fooled.

Pitch diversity is important unless you’re name is Bartolo Colon, and one of Jharel Cotton’s best traits is that he has so many effective pitches. Typically to be a starter it takes three serviceable pitches, Cotton has four. Well he should.

Back to the control thing – as we already discussed, Cotton has found himself behind more frequently putting him in hitter’s counts and limiting what he can throw. Overall this year, he’s actually throwing his offspeed stuff more frequently than last year.

That’s true against righties overall, too. But once he gets behind in the count? He almost completely abandons his offspeed stuff. When he does throw it, it’s rarely a strike and rarely swung at. Not coincidentally, Cotton has been at his worst against righties, specifically when he’s behind in the count. His predictability manifests itself most against those same handed hitters who are hitting a hideous .883 OPS against him.

Against lefties, Cotton has been fine. He’s not dominating the quite like he did last year but he’s been better than league average against them in 2017. That’s good for two reasons – for one, he’s a righty. Being able to get lefties out means he’s not susceptible to lefty heavy lineups. Having a bad season while still getting out the opposing hand is a sign that he can succeed.

The other good piece of news here? Cotton’s success against lefties is undoubtedly related to his changeup, a pitch that for many is exclusive to opposite handed hitters. He’s getting lefties out at a rate that’s just fine in spite of not having command of that pitch, the one that should be at it’s best against those swinging from the left side. When he gets a handle on it? Things could turn around in heartbeat.

A touch of optimism to close

Jharel Cotton hasn’t been unlucky. He has been straight up bad thus far. That’s fine! He’s still technically a rookie and MLB has substituted baseballs for bouncy balls. He’ll have to adjust to get the home run count down, but adjusting is what you’re supposed to do when you crack a big league rotation.

The problem is he’s lost a handle on his stuff. But it’s still there. He’s never gone this long before with such poor control and his history of being in the zone bodes well for an improved future.