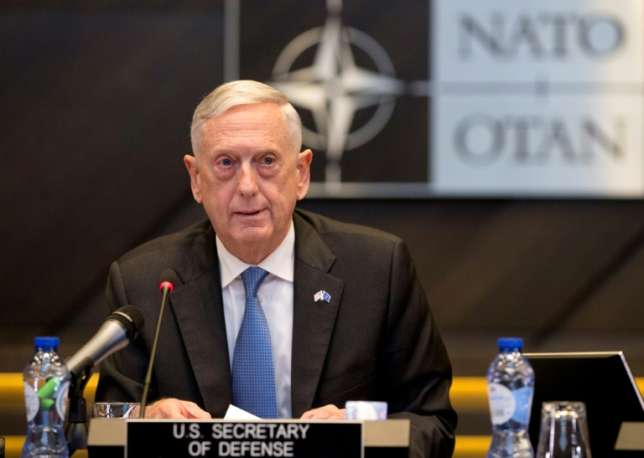 Ongoing tensions between America and its closest allies over tariffs and other issues have not soured military-to-military relationships, US Defense Secretary Jim Mattis said Monday.

Ongoing tensions between America and its closest allies over tariffs and other issues have not soured military-to-military relationships, US Defense Secretary Jim Mattis said Monday.

President Donald Trump has recently blasted several nations, including Canada, over what he has called unfair tariffs on US goods.

But Mattis said defense ministers from NATO and elsewhere are quietly continuing to work together amid the tensions.

“I know at times it all just seems to just churn here, but in fact, steady as we go,” Mattis said.

“We are maintaining … (an effort) to build stronger alliances and partnerships and broaden them.”

He added that tariffs had not come up at all last week while he was in Brussels at a NATO summit.

“The fundamental mil-to-mil relationships have held through it all,” he said.

Mattis finds himself in an unusual situation.

His role since Trump came into office has in no small part been to reassure allies that America stands behind the security and economic superstructure it engineered after World War II.

But Trump has blasted long-standing alliances, and refused to endorse a communique at the end of the G7 summit that said participants were “guided by our shared values of freedom, democracy, the rule of law and respect for human rights and our commitment to promote a rules-based international order.”

Ahead of the annual meeting of G7 leaders, Trump said Russia should be allowed back into the group following its 2014 expulsion for annexing Crimea.