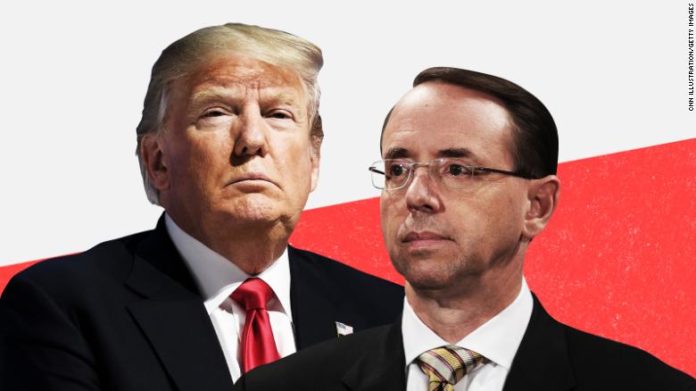 President Donald Trump, hopeful that a controversial Republican memo about the FBI might undermine the Russia investigation, appeared poised Thursday to allow the document’s release.

Trump and his aides signaled throughout the day they would not use executive power to block Congress from making the memo public, setting up a clash with the FBI and intelligence officials, who warn the memo distorts facts and could jeopardize intelligence-gathering information. The document is said to allege the FBI abused its surveillance tools.
Trump himself reviewed and read the memo on Wednesday, White House officials told CNN, and discussed it with chief of staff John Kelly and the White House counsel’s office. Trump plans to tell Congress he has no objections to the memo’s release, a senior administration official said on Thursday.
In recent phone calls, Trump has told friends he believes the memo would expose bias within the FBI’s top ranks and make it easier for him to argue the Russia investigations are prejudiced against him, according to two sources.
As the debate rages about whether the GOP memo is inaccurate and misleading — and whether it’s appropriate to reveal such classified intelligence at all — Trump appears to be more preoccupied with the political calculus. He views the memo as proof the intelligence community was unfairly targeting him and fodder for his ultimate goal of bringing an end to the Russia investigation that he has dubbed a “witch hunt,” sources said.
Many Republicans have backed Trump in pushing for the memo’s release, though they deny their motivations are related to the Russia investigation.
“If Americans’ civil liberties were abused, then that needs to come to light so that doesn’t happen again,” House Speaker Paul Ryan said during a Republican retreat in West Virginia on Thursday. “This memo is not an indictment of the FBI, of the Department of Justice, it does not impugn the Mueller investigation or the deputy attorney general.”
His views were not shared by all Republicans. Sens. Jeff Flake, R-Arizona, and John Thune, R-South Dakota, expressed misgivings about releasing the information contained in the document publicly.
Meanwhile, some White House officials downplayed the memo’s significance, saying the facts contained within the document have already been reported. The document was crafted by staff Republicans on the House Intelligence Committee, led by Chairman Devin Nunes, a Trump ally. 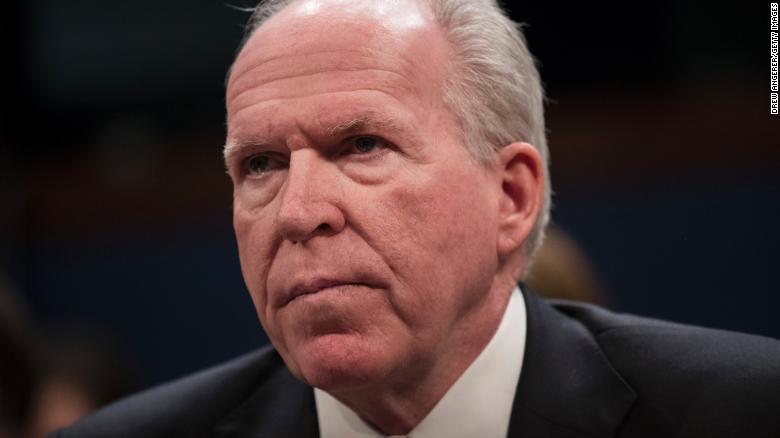 Ex-CIA chief Brennan blasts Republicans over intel memo
Trump had a five-day window to block the memo’s public release after the House Intelligence Committee voted along party lines Monday to release it. The White House said it was conducting a national security and legal review before making a decision. But it wasn’t clear what precise steps — if any — the White House or Congress was taking to ease the concerns of the FBI and intelligence officials over the memo’s content.
Before the House Intelligence Committee sent the memo to the White House, the panel made certain changes to the document, though Republicans and Democrats on the committee differ on the number and substance of their alterations. Democrats say there were five changes, while Republicans insist there were only two. The changes prompted another spat between the leaders of the intelligence panel, with Democratic Rep. Adam Schiff insisting lawmakers re-vote on the revised version.
A source familiar with the process of reviewing the memo said “accommodations” were made in response to concerns aired over the past two days, though the source indicated the steps weren’t initiated by the White House.
A White House official told reporters aboard Air Force One that the memo would likely be made public with no redactions.
“We have had over the last couple days to look at it to make sure it doesn’t give away too much in terms of classification,” the official said as Trump was returning from West Virginia, where he addressed GOP lawmakers. “Right now, I think it will be that we tell the Congress, probably tomorrow, that the President is OK with it.”
“I doubt there will be any redactions,” the official said. “Then it is in Congress’ hands after that.”
Whatever changes were made to the memo did not appear to placate the FBI, which had issued a rare public statement earlier in the week expressing “grave concerns” over the memo’s public release.
“There may be editing of the text of this memo, but that doesn’t change the overall false narrative,” a US official familiar with the FBI stance said on Thursday. “There are still grave concerns.” 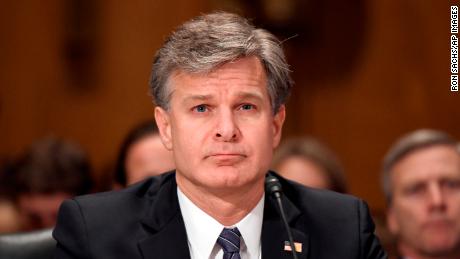 Trump squares off with a (new) FBI director
The President continues to seethe over the Justice Department’s handling of nearly everything Russia-related, sources said. Recently, much of that anger has been directed toward his Deputy Attorney General Rod Rosenstein, who oversees Mueller and the Russia investigation.
Trump has told his associates and aides he wants the memo released soon, believing that it could discredit the agency investigating possible collusion between his campaign associates and Russia.
White House deputy press secretary Raj Shah denied on Thursday that the purpose of releasing the memo was to undermine the Mueller probe and insisted that the White House is simply playing their role in a process initiated by Congress.
“No, the purpose is transparency,” Shah said, when asked by CNN about the effect on the Mueller investigation. “This is a legislative process, they have initiated it. We are only following through on our role throughout the House rules.”
On Wednesday, Trump was also upset in the wake of the FBI’s statement challenging the release of the controversial memo. The FBI’s harshly worded statement was a rare public rebuke, all the more stinging now that the bureau is led by Director Chris Wray, who Trump handpicked after he fired James Comey last May.
In condemning the four-page memo that alleges surveillance abuses on behalf of the FBI and Justice Department, the FBI said, “we have grave concerns about material omissions of fact that fundamentally impact the memo’s accuracy.”
This follows a Justice Department statement that warned releasing the memo “would be extraordinarily reckless.”
The FBI’s statement was issued just hours after the President made clear he wanted the document public. 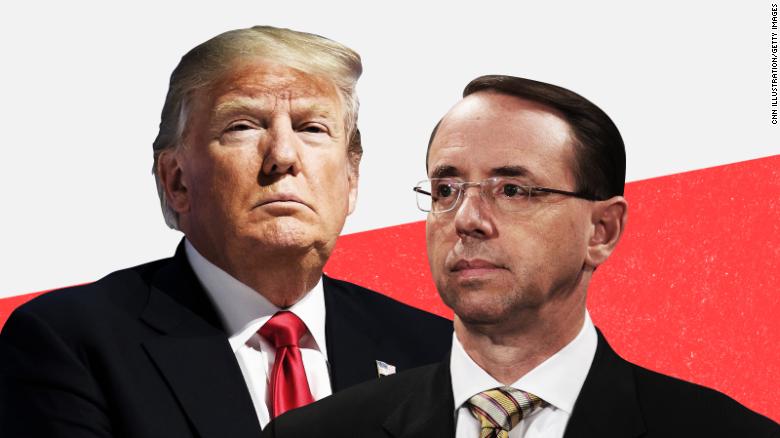 Exclusive: Trump asked Rosenstein if he was ‘on my team’
People familiar with the President’s thinking say the fate of Rosenstein, the deputy attorney general, remains in question amid the expected release of the Nunes memo.
The document claims the FBI abused the Foreign Intelligence Surveillance Act (FISA) when it used an opposition research dossier on Trump and Russia as part of its case to obtain a highly classified warrant on former Trump campaign foreign policy adviser Carter Page, people familiar with the document say.
One person suggested if Rosenstein merely submitted an application to renew a FISA warrant (one granted under previous leadership and based, in part, on information from the infamous dossier) that probably wouldn’t be a damning enough revelation for Trump to move to fire Rosenstein.
But another person said Trump is so frustrated with the Russia investigation and, in turn, Rosenstein that he may look for any opportunity to build a case for Rosenstein’s firing. He could argue that Rosenstein failed to scrutinize the information initially used to request the warrant and therefore didn’t do his due diligence.
These discussions are ongoing within the White House, one of the sources said.
Another source familiar with White House discussions said they would be “stunned” if anything happens to Rosenstein even though he’s not a Trump favorite.
As CNN has previously reported, the President has vented recently about wanting to fire Rosenstein. But for now, it remains unclear whether he’s willing to take such an extraordinary step, particularly given the backlash he faced after dismissing Comey.

Posturing on the memo 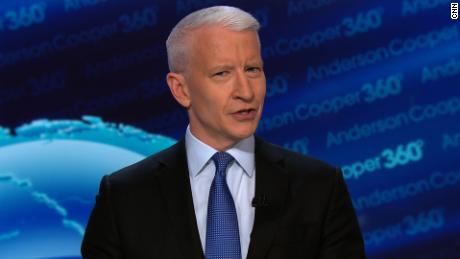 Cooper to Rep. Nunes: You’ve fooled us once 07:43
Trump’s top aides have been posturing on the memo ever since the committee voted to approve the document’s release on Monday. Officials have been unable to say whether anyone inside the White House worked with Nunes or House Republicans on the document.
After the House committee voted down party lines to release the document, the memo was couriered to the White House on Monday evening and an interagency review process began on the contents of the controversial memo. The memo was held in a room designated for classified material.
Republicans, especially those closely aligned with Trump in the House, have argued the memo must be released because it details abuse of power by law enforcement officials. But Democrats have said that memo is nothing more than an attempt by Nunes — who was a member of the executive committee leading Trump presidential transition team — and other Republicans to undercut special counsel Robert Mueller’s Russia investigation.