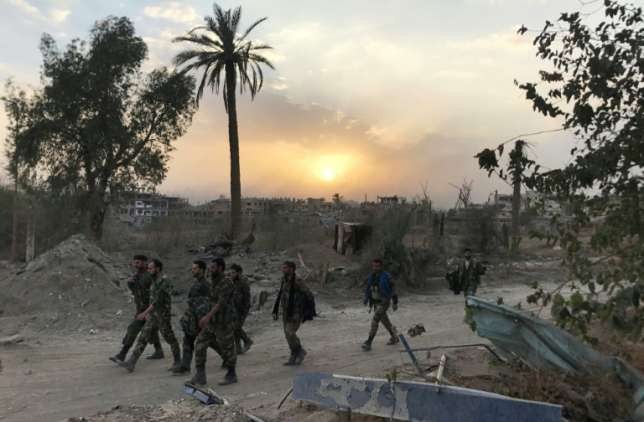 The Britain-based Syrian Observatory for Human Rights said the strikes hit the village of Al-Shafah in Deir Ezzor province, on the eastern bank of the Euphrates River.

The Observatory relies on a network of sources inside Syria, and says it determines whose planes carry out raids according to type, location, flight patterns and munitions used.

The monitor had initially given a death toll of 34 civilians but the number spiked after more bodies were recovered.

“The toll increased after removing the debris in a long day of rescue operation,” Rami Abdel Rahman, head of the Syrian Observatory for Human Rights told AFP, adding the strikes hit “residential buildings”.

At least 18 people were also wounded in the air raids, he added.

Russia is a close ally of Syria’s President Bashar al-Assad, and in September 2015 began a military intervention in support of his government that has gradually helped Damascus regain territory.

Syria’s Deir Ezzor is one of the last places IS jihadists hold territory in the country, after being driven from their major strongholds including their one-time de facto Syrian capital Raqa city.

The oil-rich eastern province that borders Iraq was once almost completely under IS control, but the jihadists now hold just nine percent of Deir Ezzor, according to the Observatory.

They have faced two separate offensives there, one led by the regime with Russian backing and the other by the US-backed Syrian Democratic Forces, an alliance of Kurdish and Arab fighters.

More than 340,000 people have been killed in Syria since the conflict began in March 2011 with anti-government protests.

The latest strikes come as the United Nations tries to revitalise its flagging efforts to end a six-year civil war that has left Syria devastated and huge swathes of its population refugees.

On Tuesday, the eighth round of UN-brokered talks will kick off.

They have achieved little so far, but may be bolstered by the opposition’s decision to bring a unified delegation to Geneva for the first time.

For progress to happen rival sides will need to overcome the hurdle that has derailed past discussions: the fate of Syrian President Bashar al-Assad.

He retains Moscow’s support but is loathed by much of Syria’s rebel opposition who want him gone.

Backed by Russia’s decisive military support, Assad’s government has regained control of 55 percent of the country, including major cities Damascus, Aleppo, Homs and Hama, and around two-thirds of the population lives in regime-held areas.

The rest is carved up between rebel factions, jihadists and Kurdish forces.

Some experts believe that Russia has clearly put itself in the driver’s seat in recent months, especially as US President Donald Trump’s administration has pulled back from Syrian diplomatic front.

Russia, fellow regime ally Iran and rebel-backer Turkey have hosted negotiations in the Kazakh capital Astana that led to the creation of four “de-escalation zones” which produced a drop in violence, though deadly air strikes and battles continue in some areas.

And this week, Russian President Vladimir Putin called for a “congress” of Syrian regime and opposition figures, a move backed by Ankara and Tehran.