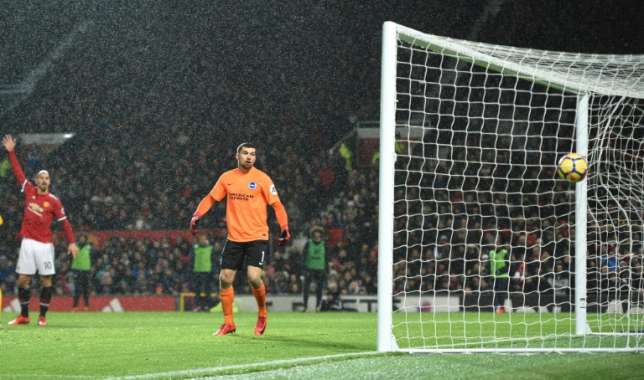 The goals having dried up for Manchester United in their recent matches, manager Jose Mourinho will hope to find the right attacking formula at high-flying Watford on Tuesday.

The goals having dried up for Manchester United in their recent matches, manager Jose Mourinho will hope to find the right attacking formula at high-flying Watford on Tuesday.

It took a fortuitous Lewis Dunk own goal for United to beat Brighton and Hove Albion 1-0 on Saturday and they had paid for their profligacy in a 1-0 Champions League defeat at Basel on their previous outing.

Mourinho said he had played with “too many attackers” against Brighton after aligning Anthony Martial, Marcus Rashford and Juan Mata behind Romelu Lukaku and now seems likely to change tack.

“(Against Brighton) our creation was poor,” he said.

“The three players that played with Lukaku did not get the ball. We weren’t successful on the one-against-one.

play Only once this month, in a 4-1 home win over Newcastle have Manchester United exhibited the kind of slick attacking football they showcased earlier in the campaign

“Marcus did not have a happy match at all. So we did not have that creation and could expect some defensive problems against a good team on the counter-attack.”

United lost 1-0 at Chelsea at the start of November and only once this month, in a 4-1 home win over Newcastle United, have they exhibited the kind of slick attacking football they showcased earlier in the campaign.

But with Chelsea, Tottenham Hotspur and Liverpool all dropping points over the weekend, United are now out on their own in pursuit of runaway leaders Manchester City.

They continue to trail Pep Guardiola’s men by eight points, but as City are not in action until Wednesday, when they host Southampton, United can apply some pressure by closing to within five points of top spot.

With the Manchester derby at Old Trafford looming on December 10, Mourinho says he will be happy to pick up points however they are obtained.

“In the Champions League (against Basel), we played some of the best football away from home in the first half and could have been 6-0, but it was 0-0,” he said.

“I am not happy with that, but (against Brighton) we scored one and one goal was enough for the three points. Because in the end we speak about what we want, but the points is the most important.”

Mourinho does not have happy memories of Vicarage Road, where he saw United succumb to a 3-1 defeat on their last visit to Watford in September last year.

But they have won comfortably on their last two outings, beating West Ham United 2-0 and then winning 3-0 at Newcastle on Saturday, which left them in the lofty position of eighth in the table.

The win at Newcastle was Watford’s biggest away victory in the top flight since a 5-1 success at Chelsea in May 1986.

Though Watford were trounced 6-0 by City in September, they have doled out some bloody noses on home turf, holding Liverpool to a 3-3 draw on the season’s opening weekend and beating Arsenal 2-1 last month.

Silva continues to be linked with the managerial vacancy at Everton, having won plenty of admirers during his brief stint with Hull City last season and his fledgling tenure at Watford.

Watford face a testing run of games that includes a visit from Tottenham and a trip to fellow over-achievers Burnley, but Silva only has eyes for United.

“We will see what will happen,” said the Portuguese.

“We will do our best to get a good result at home in front of our fans. It will be a tough game for us, but we can play with confidence.”