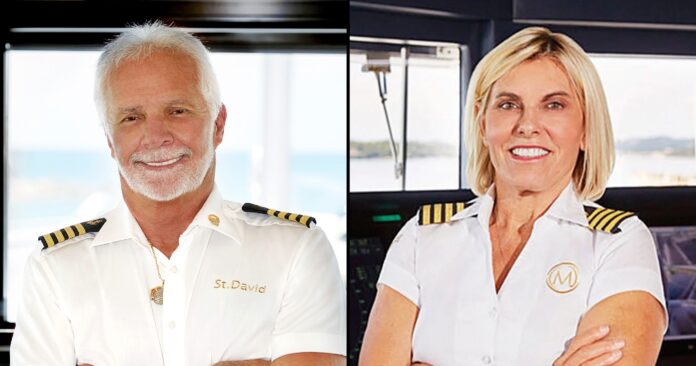 A franchise first! Captain Sandy Yawn stepped up to help Captain Lee Rosbach amid his departure from Below Deck.

“Capt Sandy came in an[d] bailed me out in a tough situation and I appreciate her efforts,” Lee, 73, tweeted on Tuesday, December 19, about his season 10 exit. He originally joined the series during its debut on Bravo in 2013.

During the new episode, viewers watched the captain say goodbye to his crew as he headed back to the U.S. to deal with his health issues. Lee noted that he planned to come back to finish the charter season.

“I’m gonna go back to the [United] States, get this straightened out — and as soon as I do — I’ll be on the first plane back here and tell whoever’s on board to get the f—k off my boat,” he quipped to his costars in Thursday’s episode, while referring to his plane ticket as “roundtrip.”

Lee previously opened up about how his personal issues were affecting his time on St. David. “My injury, it’s getting worse. The left side of my body, I don’t feel anything,” he explained in an episode earlier this month. “I expected a lot more progress than I’m experiencing, and the most frustrating part about it is, I can’t do a god goddamn thing about it, and it’s hard.”

At the time, the Florida native admitted he wanted to do “right by” his fellow cast members by stepping aside. “One of my biggest problems now is I’m not able to observe. I don’t know who’s doing what, it’s my job,” he added. “They expect that out of me. There comes a point if a captain is really being objective, he should be putting the best interests of his crew first.”

In an emotional moment, Lee informed his costars of his exit, saying, “As you guys know I’ve been struggling with my mobility, and it’s been hard and I’ve let you guys down and for that, I apologize. So I’ve made a decision to leave the boat.”

Ahead of his onscreen departure, the OG Below Deck star discussed the progress he made with his health.

“Back surgery came out great, it really did,” he exclusively told Us Weekly in December. “You will find this season that I do something that I’ve never, ever done before in my career or in my life. And there’s gonna be a lot of situations where you’re gonna go like, ‘Wow, didn’t see that coming at all.’ And not only will it be true for the viewers, [but] it was also true for myself and the crew.”

Sandy, 56, for her part, has become a familiar presence in the franchise after joining Below Deck Mediterranean in 2017. The reality TV star’s appearance marks the first crossover in Below Deck franchise history.

Earlier this year, Sandy broke down her approach as a captain, telling Us in July, “Sometimes you got to be in and get your hands dirty. That’s why I want [my team] to feel supported because I have a high expectation. Like, I am not going to stand over them, but I wouldn’t sit on the bridge knowing that they’re down crew members and not bail them out.”

Below Deck airs on Bravo Mondays at 8 p.m. ET.