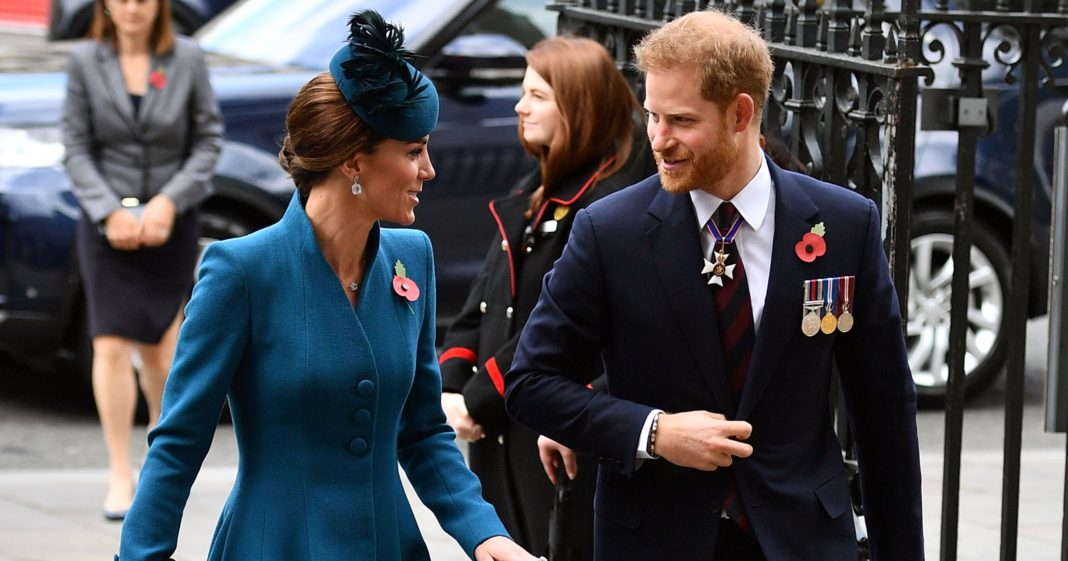 Coming together for a good cause. Prince Harry attended an ANZAC Day service at Westminster Abbey with his sister-in-law, Duchess Kate, on Thursday, April 25, as he awaits the arrival of his first child with wife Duchess Meghan.

Kate looked radiant in a teal Catherine Walker dress with a matching fascinator and forest green heels. Harry, for his part, sported a navy blue suit with military medals pinned to his chest. The sibling-in-laws looked relaxed and couldn’t contain their laughter as they strolled side-by-side when they arrived at the London church. (The venue is where Kate and Prince William tied the knot in April 2011.)

Visibly absent from the outing were Meghan, 37, and William, 36. According to the official Kensington Palace Twitter account, William is in Auckland, New Zealand, where he is visiting with survivors of the Christchurch mosque terrorist attack, which took place last month.

“The Duke of Cambridge meets five year old Alen Alsati, who is recovering in Starship Children’s Hospital in Auckland after being injured in the Christchurch mosques terrorist attack,” the palace captioned a heartwarming video of William interacting with an adorable little girl. “Alen woke from a coma earlier this week after suffering critical injuries in the attack.”

The former Suits star, meanwhile, is resting at home as she prepares to give birth to her first child with Harry, whom she wed in May 2018. The pair is set to welcome the newborn any day now.

Despite speculation that Meghan has already delivered the baby, Queen Elizabeth II’s former spokesman Dickie Arbiter revealed on April 15 that was not the case. “If you believe that [she had her baby], you’d believe anything,” Arbiter, 79, said on Today Extra at the time. “It’s really a case of keeping the royal rumor mill going — a good story sells a newspaper but, quite frankly, there isn’t any substance to it.”

Meghan and Harry have also been open about their decision to keep the momentous occasion private.

“The Duke and Duchess of Sussex are very grateful for the goodwill they have received from people throughout the United Kingdom and around the world as they prepare to welcome their baby,” Buckingham Palace said in statement earlier this month. “Their Royal Highnesses have taken a personal decision to keep the plans around the arrival of their baby private. The duke and duchess look forward to sharing the exciting news with everyone once they have had an opportunity to celebrate privately as a new family.”

Scroll down to see pictures of Harry and Kate’s time at Westminster Abbey.