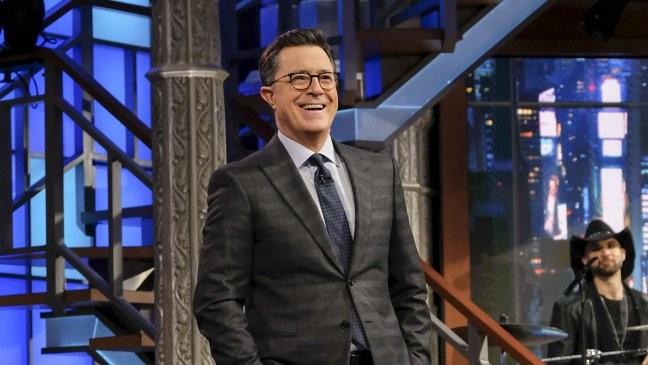 While “on assignment” in Russia, the Late Show host Stephen Colbert appeared on Russian late night show, Evening Urgant, and said that he’s considering a run for president in the next election, assuming no one in the U.S. would hear about it that is.

While playing a vodka-instead-of-bullet-infused round of Russian roulette with the show’s host Ivan Urgant, Colbert confirmed that the show wasn’t broadcast in the States and then the 53-year-old funnyman, who’s known for his dry wit and his liberal political leanings, made his big announcement.

“OK. I am here to announce that I am considering a run for president in 2020, and I thought it would be better to cut out the middle man and just tell the Russians myself,” said the former Colbert Report host.

It may have been the vodka talking, his love of trolling (especially in regards to President Donald Trump) or his dry sensibilities, so it’s unclear if he’s joking, but stranger things have happened in U.S. politics…

He added (along with a shot), “If anyone would like to work on my campaign in an unofficial capacity, please just let me know.”

Drinking a third shot, he continued: “A strong America! A strong Russia!”

Prior to making making the announcement, Stephen was joking around with the host about Russians hacking the last American election, so it’s unclear if the he was serious.

After his comments, the host joked back, “It’s a pleasure to drink with the future U.S. President. To you, Stephen. I wish you luck. We will do everything we can so you become president.”

Colbert appears to be having quite the time in Russia, tweeting up a storm of jabs at the current president.

Earlier in the week, he tweeted at the 45th president, “.@realDonaldTrump Don’t worry, Mr. President. I’m in Russia. If the ‘tapes’ exist, I’ll bring you back a copy!”

Of course this isn’t the first time that the star has said such things. In 2007, under his alter ego, he announced his own presidential campaign, but was denied a place on either the Republican or Democratic primary ballots in South Carolina (his home state). In 2011, he made a similar statement and ended up tying with Herman Cain in fifth place in a poll of that state’s voters.

If Colbert does run, he may have some stiff A-list competition as both Kanye West and Dwayne “the Rock” Johnson have also been bandying about the idea of running for the country’s top position.