Started from the bottom: Raptors aim for a storybook ending Doug Smith began writing in 1995 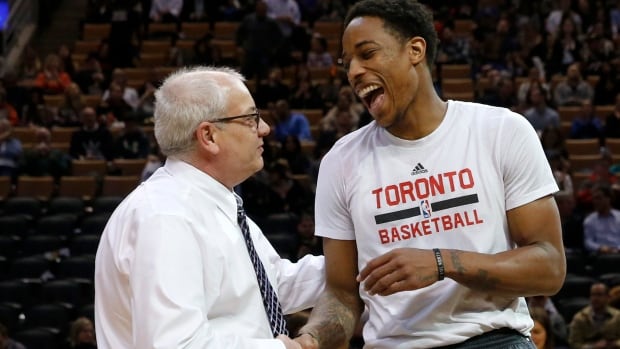 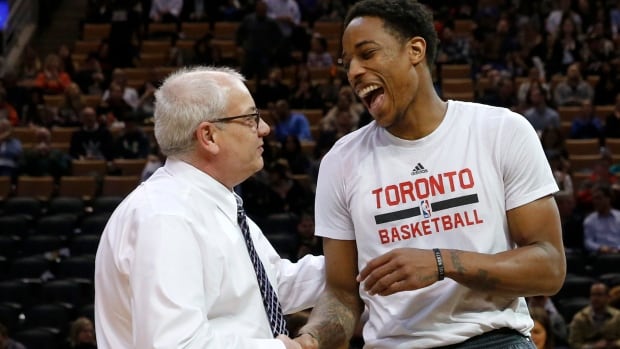 Toronto Star basketball writer Doug Smith, left, is shown shaking hands with the Raptors’ DeMar DeRozan in this 2016 file photo. Smith has covered the team since its inception into the NBA (Rick Madonik/Toronto Star)

In moments like this, these sweet basketball moments for Canada’s team, the words flow across the screen all too smoothly for Doug Smith – an unending wealth of narratives to scribble about. Fans devouring every sentence.

But there have been nights, weeks, even months when writing about the Toronto Raptors was an excruciating endeavour, even for the best.

“They’ve always been a better story than a team,” Smith said. “During those horrible years I didn’t do basketball stories, I did people stories. You couldn’t write X’s and O’s because they weren’t any good.”

Smith has chronicled every moment in Raptors history. For 25 years — starting at the Canadian Press then onto the Toronto Star — the beat writer for the team has scribed the highs, lows, lousy and sometimes exhilarating moments for this basketball team.

The Toronto Raptors continue their pursuit of history, trying to capture a first-ever NBA championship in a city starved for another great sporting moment. For at least the last 15 seasons, Smith has been on the ground covering the NBA Finals, writing about those other teams that found a way to get to this point.

So when the team he knew so intimately finally broke through one week ago today, Smith was overrun with emotion with a group of diehards who slogged through the darkness.

“It was cathartic. It was an amazing time. The emotional outlet when the buzzer went and the confetti fell, was a true celebration,” he said, smiling. “The fans were ecstatic. The players know what they mean to people in Toronto and across Canada.”

‘Never thought I’d get to see it’

It was made all the more magical because Smith didn’t think he’d see something like this in Toronto – not only because of how bad the team had been at times but because of a health scare one year ago.

After the Raptors’ final regular season game last April, Smith was walking up the ramp from the arena workroom to Dwane Casey’s post-game press conference when he suffered a heart attack. It led to a couple of weeks of waiting for surgery, followed by 13 hours in the operating room as doctors rebuilt his heart.

For the first time in his career, Smith was missing Raptors games – their 2018 playoff run that ended yet again at the hands of LeBron James and the Cleveland Cavaliers.

“The last year has been very difficult. It was hard. Aortic dissections are not a fun thing or a thing a lot of people come back from,” Smith said, frankly. “I’m glad to be standing here. I’m proud of this organization. And I’m really excited to see how this unfolds.”

When Smith walked up to the media trailer to pick up his credentials for the first-ever NBA Finals in Canada, he was almost giddy with excitement – two-fold joy, that this team persevered and so too did he.

“I’m blessed, I’m proud, I’m happy and I’m grateful. Everyone chipped in here and got me here.”

Dark days lead to this moment

When Smith thinks about those early days in those jarring dinosaur jerseys with the team playing in the hollow confines of the SkyDome, he can’t help marvel at just how far they’ve come.

“The sense of anticipation in 1995 was huge,” he said. “But obviously 24 years ago this was an incredible hockey town. People didn’t know what basketball was or what the NBA was.”

Smith says there was a diehard fanbase of about 10,000 people or so who were crazy for their Raptors. But outside of that, the team didn’t own much real estate in the minds of Torontonians or Canadians.

That belief was challenged in the most extreme way during the third season for the franchise.

“It was next to impossible. They lost their first two, won their next game and then lost 19 in a row,” Smith said.

The Raptors finished with a 16-66 record that year and when it ended general manager Glen Grunwald stood at midcourt at Maple Leaf Gardens, apologizing.

“The fans are booing with venom and at that point you didn’t know if it was sustainable. It was the darkest moment,” Smith said.

But the team trudged on, looking for something to ignite a fanbase – then Vince Carter arrived, and everything changed. Smith says the Carter dunk during the 2000 All-Star game was the coming out party for the Raptors – Toronto was finally on the basketball map.

“That was the highest point in those years,” he said. “It was astonishing, really.”

Contrast all of that with this historic Raptors run captivating Canada and it becomes apparent quickly why Smith is relishing it.

The Raptors are now just three wins away from capturing their first NBA title – but there’s still a steep mountain to climb against the two-time defending champion Golden State Warriors. Not many were giving Toronto’s team a chance heading into the series. But Smith was, and still is.

“I absolutely think they can win the series,” he said, without pause. “These guys are just as good as them. And the thing about these Raptors, nothing is going to faze them. They might get down a game or get down deep in a game but they’re hard and tough, grown men who have been through a lot of big games.”

If anyone knows, it’s Doug. He knows the game better than most. He knows the people within the game just as well – so when he gives the Raptors a chance, believe it.

“I think people discount that. I know, the Warriors are the Warriors. But I wouldn’t count the Raptors out.”

When he began writing about this team, did he think the little team for the North would ever make it here? Probably not. But now that they are, Smith says why not finish off a long, arduous, quarter-century journey at the top of the mountain?

“This run has been exhilarating because I never thought I’d get to see it personally or professionally,” Smith said. “It’s been incredible, and I don’t think it’s over yet.”