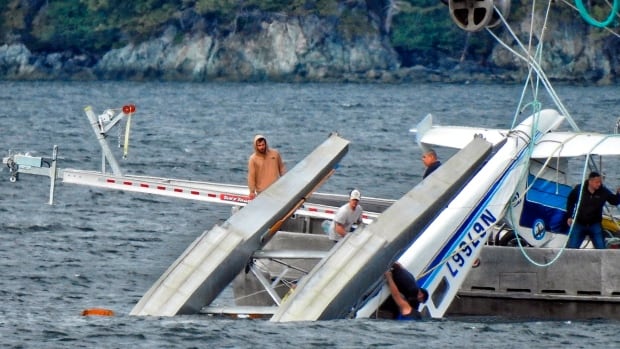 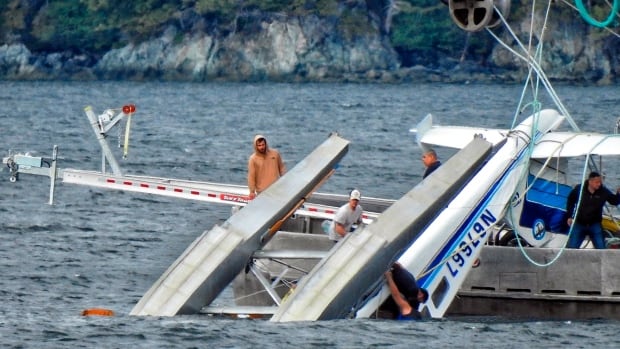 This May 20, 2019, photo shows Good Samaritans aboard a fishing vessel attempting to bring in a float plane that crashed in the harbour of Metlakatla, Alaska. A preliminary National Transportation Safety Board report released Friday says the pilot had just five hours of float plane experience when he began company orientation in April. (Aerial Leask via The Associated Press)

A pilot who crashed a commercial float plane while landing at a southeast Alaska village had just five hours of float plane experience when he began his company orientation in April, according to federal investigators.

The National Transportation Safety Board on Friday released the preliminary report on the May 20 crash of a Taquan Air flight in the harbor at Metlakatla.

The crash killed pilot Ron Rash, 51, of Harrisburg, Pennsylvania, and Sarah Luna, 32, a senior epidemiologist in the liver disease and hepatitis program of the Alaska Native Tribal Health Consortium. She was the only passenger.

It was the second fatal crash for the Ketchikan-based Taquan Air in less than week. On May 13, a Taquan float plane on a sightseeing tour collided mid-air with another floatplane. Six people died and 10 people were injured.

The NTSB preliminary report cites no cause for the second crash.

Managers at Taquan Air told investigators that Rash, who is not named in the NTSB report, was a new seasonal hire for the 2019 season.

When he started Taquan orientation on April 22, he had accumulated more than 1,600 flight hours but just five in airplanes equipped with floats. He completed check rides in a float-equipped plane on May 3 and initial operation experience requirements on May 11.

The float plane crashed on a scheduled flight while landing after a 35-kilometre flight from Ketchikan.

An airport near the crash site reported winds at 18.5 km/h, visibility of 16 kilometres and clear skies.

Three witnesses said the float plane’s approach to the harbour was normal.

Two said that just before the floats touched the water, the airplane’s wings rocked left and then right. One witness said the right wing struck the water and the airplane flipped nose-first.

A witness from a fishing boat said he saw the right float “dig into the water” before the airplane nosed over. The right wing and right lift strut broke off and sank. They have not been recovered.

The cockpit and airplane cabin partially sank. Two boats rushed to aid the plane and a fishing boat hoisted the tail slightly out of the water.

Good Samaritans and Metlakatla emergency medical technicians removed the pilot and passenger from the plane. They were declared dead at Annette Island Health Center.