South Korea and US discuss future of joint war games 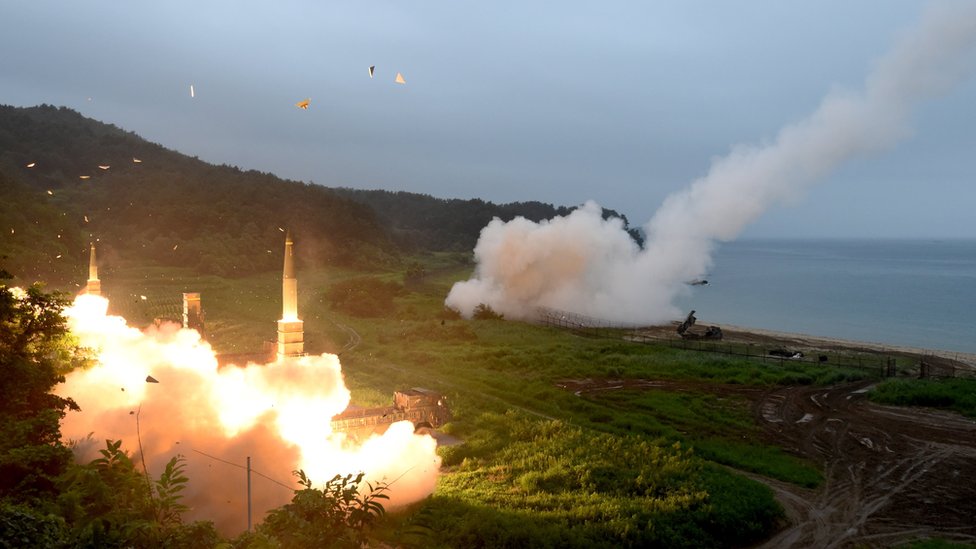 The defence ministers of South Korea and the US have discussed the future of their joint military drills after the US president said they would be ending.

The US has insisted its alliance with Seoul – which has always said the drills are essential – is “iron clad”.

Separately, South and North Korea have said they will completely restore their military communication lines.

There are about 29,000 US soldiers based in South Korea and each year the two countries regularly conduct large scale military drills, often called war games.

The next exercises were scheduled for autumn.

But following his talks with Kim Jong-un in Singapore, Mr Trump described the drills as “very provocative” – contradicting previous US administrations’ insistence that the drills are purely defensive – and said he was ending them.

South Korean Defence Minister Song Young-moo on Thursday held talks with his US counterpart James Mattis to discuss the exercises.

Mr Song said the two allies should be “flexible” about how much military pressure they put on the North, the ministry said, adding that the US and South Korea would hold further discussions soon.

North Korea has long condemned the drills as an unacceptable act of aggression and provocation.

Mr Trump’s nominee as next ambassador to South Korea, Harry Harris – previously a supporter of the drills – has said that “major exercises” should be paused to allow time to test Pyongyang’s commitment about dialogue.

The decision to end the military exercises has been widely criticised as a major concession to North Korea, while the joint declaration Mr Trump and Mr Kim signed at the end of the Singapore summit has been criticised as lacking in detail.

North Korea agreed to “complete denuclearisation of the Korean peninsula” only in very general terms, without a timeline or a commitment to allow international verification.

Responding to the criticism, US Secretary of State Mike Pompeo said sanctions on North Korea would remain in place until the country completes its denuclearisation.

Mr Pompeo was speaking in China, as he visits US allies post-summit to discuss both the Korean situation and trade issues.

China is seen as the main economic ally of the isolated North Korean regime.

The US and China are also at odds over an intensifying dispute over trade barriers Mr Trump has threatened.

Seoul and Pyongyang, meanwhile, have continued the new dialogue which followed the inter-Korean summit in April.

That summit – where South Korean President Moon Jae-in met Kim Jong-un at the border – ended in the Panmunjom Declaration, calling for joint efforts to ease military tensions on the peninsula.

On Thursday, at the first high level military talks in more than a decade, the two Koreas agreed to restore their military communication lines, seen as an important confidence-building gesture.

The two sides are also discussing resuming economic co-operation and arranging reunions for families separated by the Korean War.