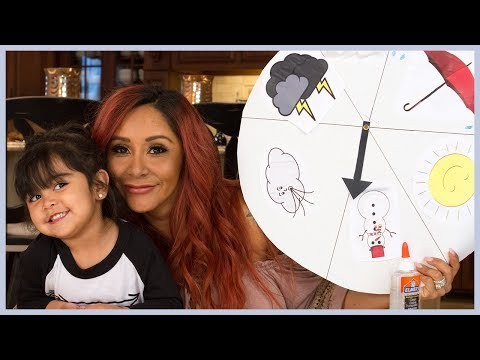 Get crazy, get loud: Snooki is totally down for a Jersey Shore reboot!

The wild child reality star and entrepreneur caught up with E! News’ Sibley Scoles, where she revealed that a return to the shore isn’t completely out of the question (with one major exception, of course).

“Yes!” Snooki (real name Nicole Polizzi) dished, “but not for a long time because I have kids. Like for a week.”

Jersey Shore aired on MTV for six seasons between 2009-2012, documenting Snooki and the rest of her outspoken roommates partying their summers away by the beach. Earlier this year, co-stars JWoww, Deena Cortese, Vinny Guadagnino and Roger Mathews reunited to celebrate Sammi “Sweetheart” Giancola‘s 30th birthday in New York City. Despite staying close with her Jersey Shore family, Snooki told us she’s kept her distance from Mike “The Situation” Sorrentino, who faces 15 years in prison for a 2014 tax evasion indictment.

“I haven’t really talked to Mike since the reunion,” she said. “We’re not exactly friends. I don’t wish harm on him or hold a grudge. I feel terrible. Nobody wants to go to jail.”

But if there’s one cause this proud mama can’t resist weighing in on, it’s the hate she battles almost daily from social media trolls. Snooki recently turned off the comments section on her Instagram page after being bombarded by critics questioning her parenting style.

“I think [mommy shaming] is worse than any type of bullying,” Snooki admitted. “I don’t judge another mom because everyone’s going to do it differently, but as long as your kid is alive and taken care of and loved, you’re doing your job.”

Would Snooki want 2-year-old Giovanna and 5-year-old Lorenzo to follow in her footsteps for a vacation along the Jersey Shore? She quipped, “No, goodbye. Kill them. They’re going to be doctors and lawyers.”

For more LOL-worthy moments from the star, watch the video above!