‘She didn’t hesitate’: The untold story behind a Black Canadian woman’s wartime portrait 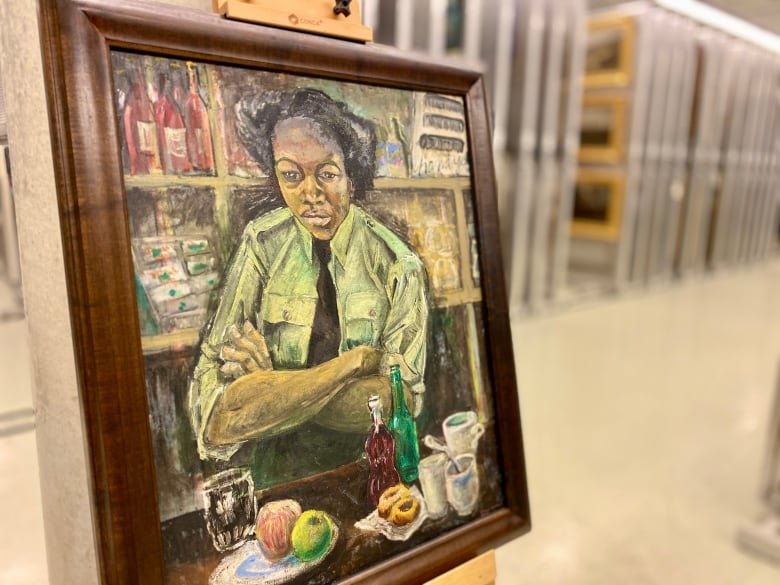 Thousands of people have seen it over the past 70-plus years: a dramatic oil portrait from 1946 of a Black Canadian woman in a military uniform, standing behind a canteen counter.

Her arms are crossed. Her face is stern. Decades later, the portrait still conveys an image of strength.

It’s one of the most famous canvases to come from the brush of Molly Lamb Bobak, Canada’s first female war artist. It’s been exhibited in galleries and museums around the world.

But while the painting itself is familiar, the story behind it — of its subject, Eva May Roy — is far more obscure.

“This painting of Private Roy has been part of the public imagination for decades,” said Laura Brandon, a retired curator of war art at the Canadian War Museum. “It’s well known, but Roy’s story is not.”

Roy died in 1990, having retired from the military with a sergeant’s rank. She’s one of many Black women who served in the Canadian Forces during the Second World War — people whose stories are largely missing from the public record.

Roy was a trailblazer, serving overseas at a time when it was rare to see a Canadian military woman working in Europe.

“She was right in there with everybody else doing the same thing,” said her granddaughter Shannon Roy. “She didn’t hesitate…She commanded respect.”

Stacey Barker, Canadian War Museum historian of art and military history, recently combed through Canadian Forces records to uncover more about the person behind the painting.

She learned that, after the war broke out, Roy left her job as a presser in a laundry to become a machine operator and fuse assembler at the General Engineering Co. munitions plant in Scarborough, Ont.

Roy enlisted in 1944 and joined the Canadian Women’s Army Corps (CWAC), a new division created just three years earlier. CWAC had 50,000 women in its ranks during the Second World War in support roles ranging from cooking to decoding.

Historians say that before the CWAC was created, the only option available to Canadian women looking to get involved in the war effort was to serve as a nurse — and it was nearly impossible for Black women to get that training.

Roy trained as a cook and served in military canteens in Canada, the United Kingdom and Holland.

“That was pretty unusual,” said Mélanie Morin-Pelletier, the acting director of research and chief historian at the Canadian War Museum.

“Only one in nine Canadian women in the army served overseas. So it was amazing that she was able to do that.”

Roy’s military records show that the stern image presented by her portrait was a little misleading. She had an outgoing personality, was enthusiastic about the army and loved to sing.

She was posted for a month to audition with the Army Show, an in-house performance troupe that entertained Canadian soldiers overseas. But no one would teach her the routines, the museum said.

“There’s no official reason why she didn’t make it, but we have to remember she would have been the only Black woman in the chorus,” said Morin-Pelletier. “So it’s easy to read behind the lines.”

After returning to Canada in January 1946, Roy worked as government postal clerk in Toronto, the museum said. Almost a decade later, when CWAC launched another recruiting campaign, Roy re-enlisted, served from 1955 to 1965 and attained the rank of sergeant.

Shannon Roy said her grandmother wasn’t the type to be pushed away from something she wanted to do.

“It was a different time back then, and unfortunately there was a lot of racism,” she said. “So the fact she was able to make the rank of sergeant is just incredible in my mind.

“You think they may hold her back, but I’m sure she wouldn’t have let them because that’s just the type of person she was. She would have stood her ground.”

She has another painting of her grandmother hanging in her house. Her photo albums are filled with black-and-white images of Roy in her uniform and doing track-and-field.

Those photos show a side of her that Bobak’s portrait does not — confident, calm, always smiling.

“People would gravitate toward her,” said Shannon Roy. “Just for her smile alone.”

Her family describes Roy as an outgoing, determined and hard-working single mother who lived in Cobourg, Ont. for more than 25 years. Roy worked at the Queen’s printing shop and was known for having the “best laugh,” said Marney Massy.

Massy’s grandmother, Joan Cork, lived with Roy. They were both single mothers with military experience. Cork served in the reserves, her family said.

“They had a lot in common and helped each other out during tough times,” said Massey.

Roy’s son Peter was known in town for his support for the Royal Canadian Legion and for helping with the annual poppy campaign in his mother’s memory.

Before he died in 2018, he travelled to Ottawa to see his mother’s portrait in person.

“He was so happy to have another picture taken with his mother,” said his wife Hilda Roy.

That painting of Roy is so evocative, so filled with life, it casts a spell on almost everyone who sees it.

Tanya Lee, who runs a national book club for high-risk teens, first saw a photo of the painting in a book 20 years ago. She said she couldn’t believe she hadn’t known before that Black Canadian women served in the Second World War. It was never taught in school, she added.

“When I looked at that first, I was looking at her and wondering what it must have felt like to fight for your country … knowing that at home you’re still considered a second-class citizen,” said Lee.

Lee spent years learning about Roy and is now working on a pitch to make a documentary about her life. She said plans are also in place to bring Black veterans in to meet her book club in the new year, to ensure Roy’s story is shared with a new generation.

“It was a missed opportunity back then, but it’s an opportunity now,” said Lee. “Only certain people’s stories are honoured and we need to revisit that conversation.”