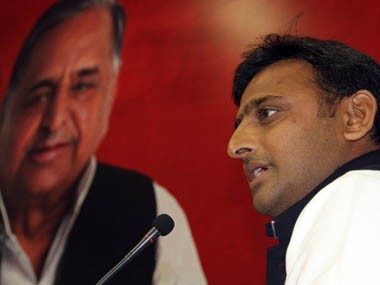 Samajwadi Party (SP) president Akhilesh Yadav and party national general secretary Ram Gopal Yadav on Tuesday skipped a meeting of the SP-affiliated Dr Ram Manohar Lohia Trust, which was presided over by its chief trustee and party founder Mulayam Singh Yadav in the state capital.
Also present at the two hour-long meeting were Akhilesh’s uncle and MLA Shivpal Yadav and senior SP leader Bhagwati Singh. After the meeting got over, Shivpal said it was held to discuss how the ideas of Lohia could be spread. Mulayam did not speak to reporters.

Though Shivpal did not reveal any exclusion of names from the list of the trust’s members, his close aide Deepak Mishra later said that a few changes had been made to it, and that Akhilesh loyalists Ram Govind Chaudhary, Leader of Opposition in the Assembly, Ahmed Hasan, MLC and Opposition leader in the Legislative Council, former MP Usha Verma and party leader Alok Shakya had been removed. Mishra further said that he, alongwith party leaders Rajesh Yadav, Ram Naresh Yadav and Ram Sevak Yadav had become new members.

Shivpal said Akhilesh and Ram Gopal were informed about the meeting but may have been unable to attend as they were busy, adding that they could come for the next one. He further said that members of the trust are appointed and continue on their posts at the discretion of the chief trustee, and that all those working to propagate the principles and ideology of Lohia will remain its members.

Asked about the three SP MLCs who recently defected to BJP, Shivpal said “consultation” is going on to ensure that the SP remains “strong and united”. To a question about his earlier statement of forming a separate front, he replied to mediapersons: “You should not worry about that.”