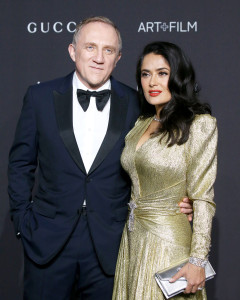 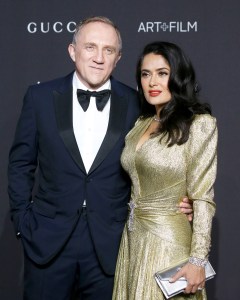 Doing their part. The world watched in dismay as a tragic fire caused extensive damage to Paris’ iconic Notre Dame cathedral on Monday, April 15, and now donations are coming in to help rebuild the historic structure.

Salma Hayek‘s husband, François-Henri Pinault, has pledged to donate €100 million — or approximately $113 million — according to a statement released by the businessman.

“The Notre-Dame tragedy strikes all French people, as well as all those with spiritual values. Faced with this tragedy, everyone wishes to bring this jewel of our heritage back to life as soon as possible,” François-Henri, 56, said in a statement obtained by The New York Times. “Today, my father and I have committed to donate €100 million from the Artémis fund to take part in the effort needed to fully rebuild Notre-Dame de Paris.”

François-Henri is the CEO of an international luxury group called Kering, which owns brands such as Gucci, Alexander McQueen, Balenciaga, and Yves Saint Laurent. Hayek, for her part, portrayed Esmeralda in Disney’s 1996 film The Hunchback of Notre Dame, making the landmark even more near and dear to the couple’s hearts.

LVMH — the world’s largest luxury-goods company — and its CEO, Bernard Arnault, later announced they would donate €200 million ($226 million). “The LVMH Group puts at the disposal of the state and the relevant authorities all of its teams — including creative, architectural and financial specialists — to help with the long work of reconstruction and fund-raising, which is already in progress,” the group said in a statement to the Times.

Other companies who have pledged to donate funds to help rebuild the iconic cathedral include Total and L’Oreal. Apple chief Tim Cook, also said he would put forth money to assist in restoring a “precious heritage for future generations.”

Celebrities flooded social media with heartbreaking posts on Monday as the Paris landmark was engulfed in flames.

“My heart is breaking seeing the fire at notre dame. I’ll never forget walking in the first time in Paris and being in awe of the beauty of it,” Camila Cabello tweeted.

Former president Barack Obama, for his part, wrote: “Notre Dame is one of the world’s great treasures, and we’re thinking of the people of France in your time of grief. It’s in our nature to mourn when we see history lost – but it’s also in our nature to rebuild for tomorrow, as strong as we can.”