Ronnie Ortiz-Magro: Jen and I Are ‘Working on Our Relationship Every Day’ 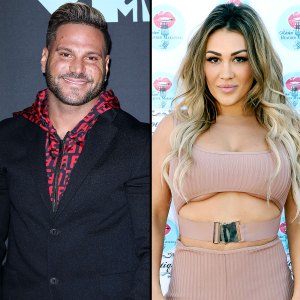 Putting in the work. Ronnie Ortiz-Magro and Jen Harley are devoted to their 17-month-old daughter, Ariana Sky. In fact, she’s a big part of why they’re trying to make a relationship work.

“You know, we’re still not perfect, but we’re still working on our relationship every day,” the reality star, 33, tells Us Weekly exclusively. “I really think it is [about] being the best parents that we can be to Ariana and that we’re doing a great job so far.”

Harley, 31, has had an up and down relationship with the Jersey Shore: Family Vacation star ever since they met in early 2017, but the duo have always stayed on the same page when it came to putting their daughter first.

On September 5, Us confirmed that the two had split; Harley seemingly confirmed the news as well, posting a slew of photos of Ortiz-Magro with another woman. “Ronnie did not cheat. That girl is a friend of his and that was from a boat party with a bunch of people,” an insider told Us at the time. “She was there for him because they broke up middle of last week, and she was being that friend consoling him. He was really upset.”

In July, the Bronx native told Us things were “going good” in their relationship. “I think it’s because I made a change and I stopped doing the same thing over and over again,” he shared. “I started just focusing on myself and stopped worrying about what other people wanted from me, and what I want for myself.”

Us broke the news in February that Ortiz-Magro had spent a month in treatment for help with depression and alcohol abuse. “I wanted to be a better person, a better father for my daughter,” the former Famously Single star told Us at the time. “Eventually, all the bad decisions I was making were going to lead me to places that I didn’t want to be. I wanted to be led to the place that I am now – that’s happy, healthy and the best role model for my daughter.”