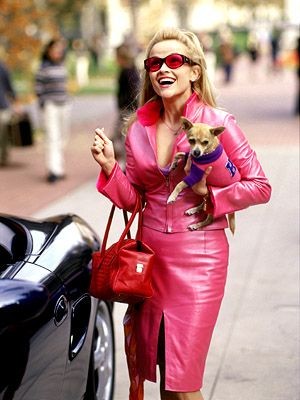 All these years later, Reese Witherspoon still understands the important of having a bunny costume ready in your closet.

While its been 16 years since the Oscar winner headed to law school as the beloved sorority girl turned attorney, Elle Woods, it was as if no time had passed at all when she dug up a bunch of her iconic costumes from the film and modeled them on social media last year.

Remember when she showed up to a fake costume party in a body suit and bunny ears only to storm out and buy a laptop? Yup, she still has it. What about the striped off-the-shoulder top, pink pants and newsboy cap Elle sported to meet her new classmates on the green at Harvard? “Still fits too,” Witherspoon wrote on Snapchat with excitement.

Of course, who could forget the pink printed halter dress she wore to dinner with Warner, expecting to get engaged but really was just dumped. Yes, all these years later, Elle’s pain still stings, but the dress still looks superb.

No outfit is complete without shoes and, fortunately for Witherspoon, she still has rows and rows of Elle’s, including two sets of fuzzy slippers and a handful of various pink heels and sandals.

The snaps resurfaced this week and caught the attention of even Witherspoon herself. “Whoever said orange was the new pink was seriously disturbed!” she tweeted to a fan who shared the old images of the try-on session.

While the star looks exactly the same as she did the first time she acted in the outfits, she’s reminded of time’s passage by her 17-year-old daughter, Ava Phillippe, who had just celebrated her first birthday when they were shooting.

“I remember her visiting the set and how much she loved all of the costumes and all the pink clothes and the dog. It was a really fun cast and everybody was excited about creating something that wasn’t just confection,” she told the Instagram blog last summer. “It actually had a meaningful story that we had no idea would resonate so strongly with so many people. And it was about female empowerment. It wasn’t necessarily about the girl getting the guy.”

While the girl did get the guy, she also got the degree, the job and a fabulous closet to boot.