Jubilation in Port Harcourt as soldiers return from restive Northeast 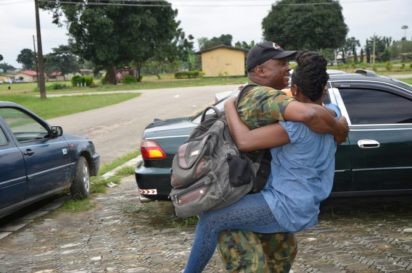 BY JIMITOTA ONOYUME
PORT HARCOURT – There was jubilation at the 6 Division, Port Harcourt Thursday when soldiers from 29 Battalion in returned home after taking part in the the war against dreaded Boko Haram insurgent in Nigeria’s restive North East. A soldiers from 29 Battalion
Spokesman of the Division, Colonel Aminu Ilyasu said the soldiers served under various units in the Operation LAFIYA DOLE, adding that they came back following rotation of troop for the military operation in North East ordered by the Chief of Army Staff, Lieutenant General Tukur Buratai.

He explained that the Chief of Army Staff, Lieutenant General Tukur ordered that soldiers that had overstayed in the Operation LAFIA DOLE operation in North East be replaced.

The General Officer Commanding the Division, GOC, Major General Enobong Udoh welcomed the soldiers, assuring them of their welfare. He said they should remain professional in their conducts, saying they would deployed for operations under the Division.