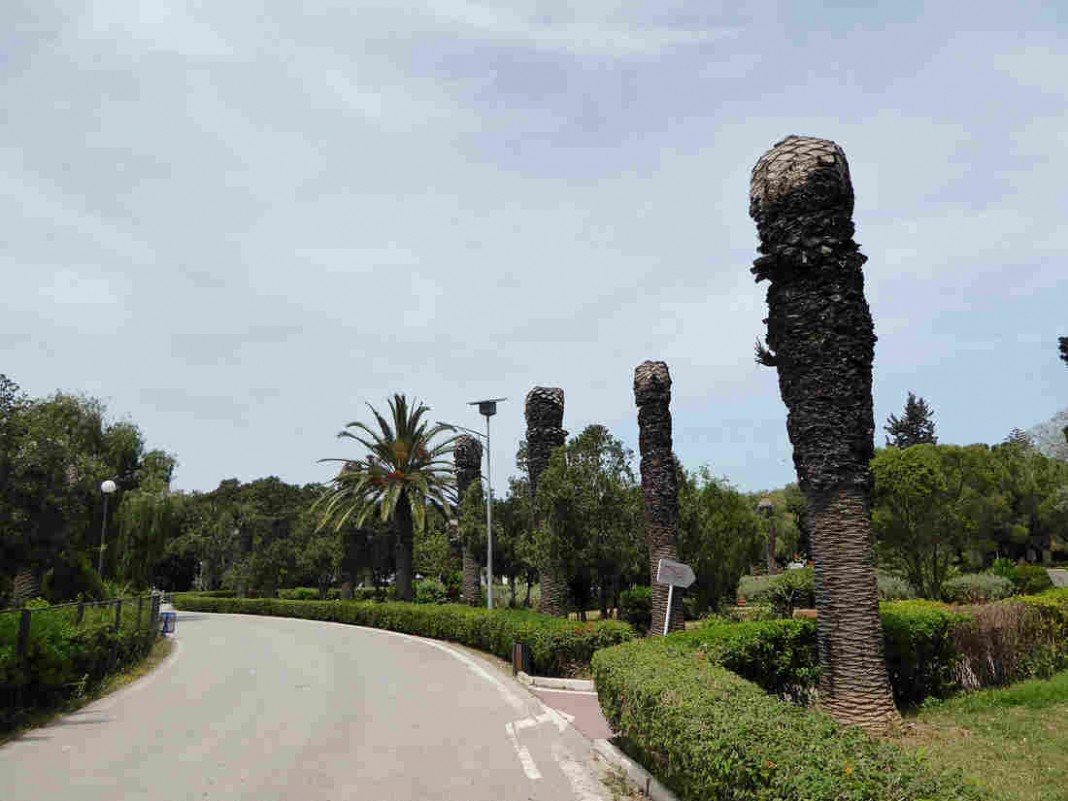 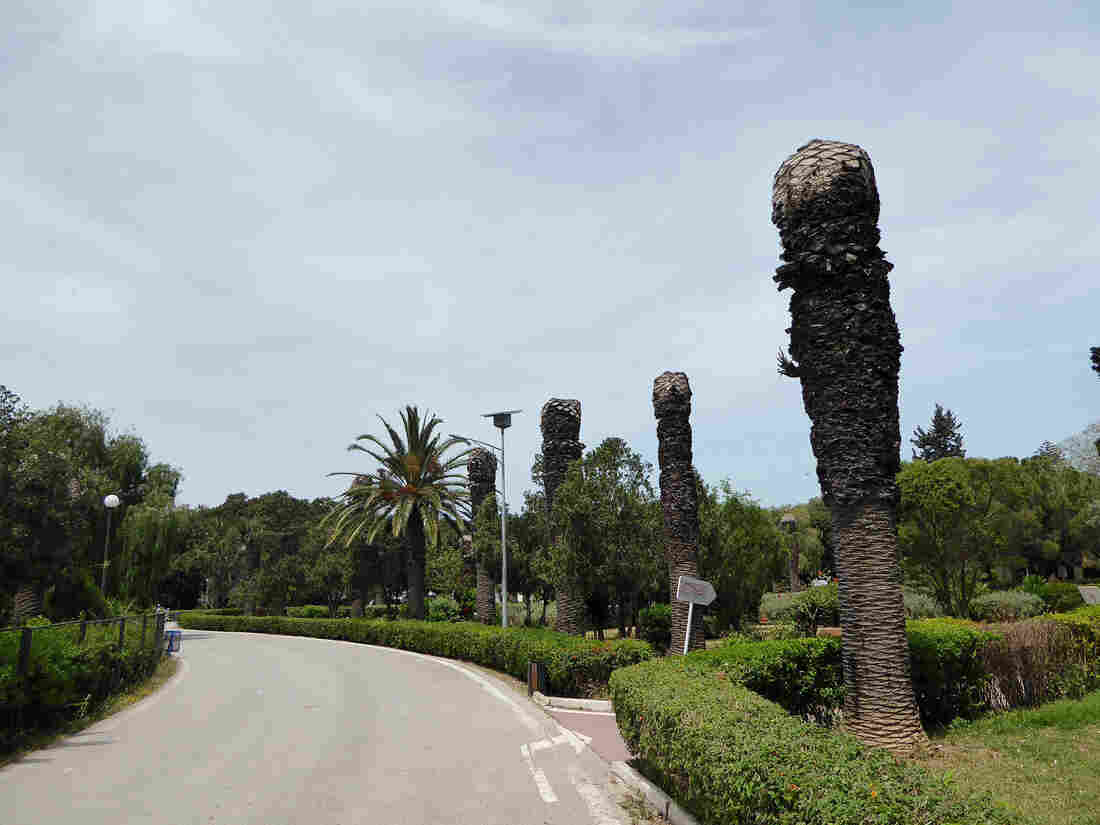 Courtesy of Mark Hoddle/Department of Entomology, University of California Riverside

Courtesy of Mark Hoddle/Department of Entomology, University of California Riverside

One of the biggest threats to global agriculture these days is a tiny, bright red weevil.

These little crimson devils eviscerate coconut, date and oil palms, and are native to South Asia. But thanks to globalization, and the fact that these tenacious buggers can fly up to 30 miles a day — over the last three decades they’ve spread to more than 60 countries from the Caribbean to Southern Europe.

“We were expecting that they would come eventually,” says Abdelazize Eljiati, a Saudi Arabian date farmer who got into the business in 2010, when there was no red palm weevil in this region.

Back then, the weevils had weaseled their way to the southwestern parts of the country, but Eljiati’s 300,000 date palms were far away — mostly in the eastern and central parts of Saudi Arabia. Still, he sent a special team of his employees to weevil-infested parts of the country, where they could train to fight the impending menace — and prepare for the eventuality that they would spread to his farms.

For farmers across East Asia, North Africa, Europe and the Middle East, the red palm weevil evokes serious anxiety. These pests, which attack 40 different species of palm, have caused economic losses in the millions of dollars annually worldwide. That’s why in March, the United Nations Food and Agriculture Organization invited scientists, pest control experts, agricultural ministers and farmers from around the world to Rome, to develop an international action plan against the weevil. And this month, the U.S. State Department and the Tunisian agriculture department held another conference with the same aim — to stop the pest that could thrust Tunisia, the world’s leading date exporter, into an economic crisis.

There’s good reason for all the panic, says Mark Hoddle, an entomologist at the University of California, Riverside. “Red palm weevils are notoriously difficult to detect — until it’s too late,” he says.

One female weevil can lay up to 300 eggs — hiding them inside holes and cavities in the trunk of a palm. Once they hatch, “the larvae burrow deep inside the palms,” munching their way through the tree, and destroying it from the inside, Hoddle explains. 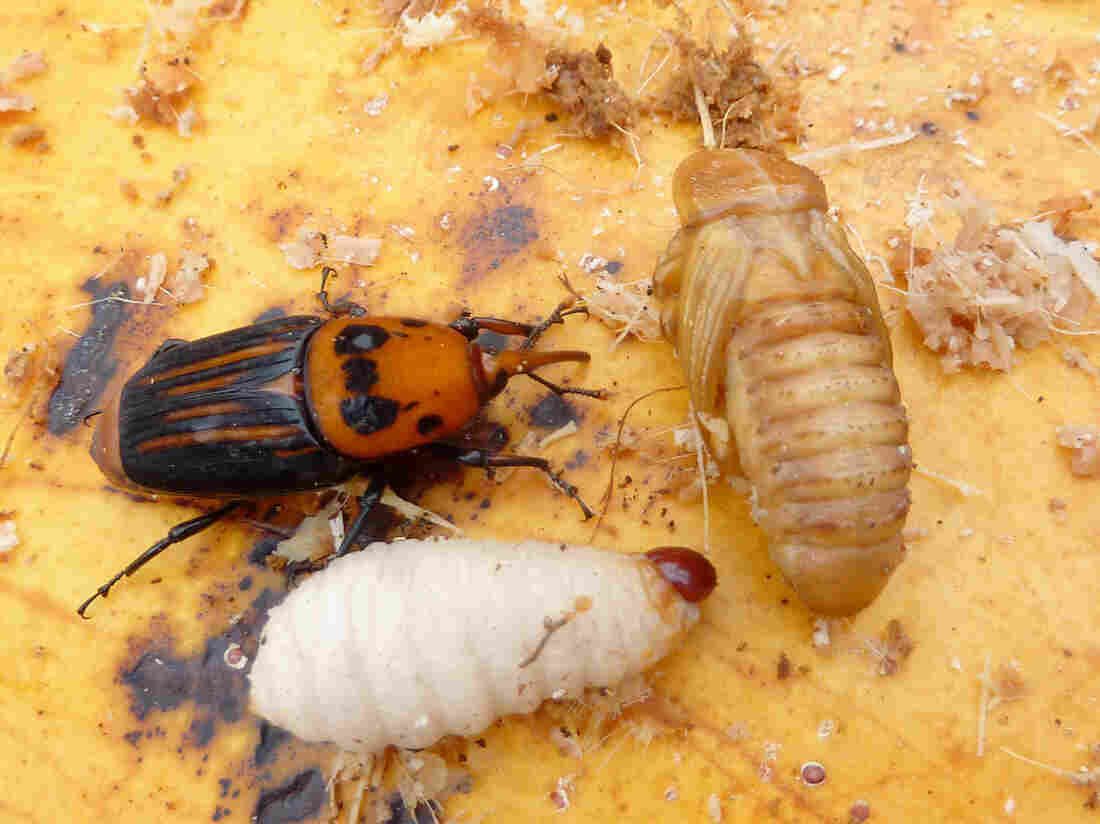 A red palm weevil adult next to a larva (white grub), and pupa (beige). The insect attacks 40 different species of palm, including coconut, date and oil palms, and has already cost millions of dollars in damages worldwide. Courtesy of Christina Hoddle/Department of Entomology, University of California Riverside hide caption

Courtesy of Christina Hoddle/Department of Entomology, University of California Riverside

A red palm weevil adult next to a larva (white grub), and pupa (beige). The insect attacks 40 different species of palm, including coconut, date and oil palms, and has already cost millions of dollars in damages worldwide.

Courtesy of Christina Hoddle/Department of Entomology, University of California Riverside

The bugs eventually leave the trees brown and droopy, the insides of their trunk mushy, and smelling like “baby diarrhea,” Hoddle says.

When the weevils finally arrived at his date farm in 2014, Eljiati used dogs trained to detect a particular scent that the weevil larvae emit. “There’s also a way to listen for the weevils,” Hoddle says. A trained farmer will be able to hear the weevils gnawing their way through a palm — in which case they can chop down the tree and quarantine the area. They can also set traps for mature weevils that are roaming about.

The problem is that too many people, including farmers aren’t even aware of these pests. “People are still moving live [weevil infested] palm trees around, and across borders,” Hoddle says. Both individuals (who may sneak a decorative palm plant from a weevil-infested area in their luggage) and bigger businesses (who ignore advice to quarantine palms for up to six months before introducing to a new area) are to blame for the pest’s rapid proliferation.

But once the weevils got to California, they didn’t just sit tight and wait to be devoured. They flew away and infested the iconic palms lining Southern California’s sunny sidewalks. Landscapers noticed that the palms were slowly dying.

Hoddle and his colleagues were able to reign in the wayward weevils quickly, using pesticide-laced traps to bait and kill them. That wasn’t the case in more than 60 countries that the weevils have invaded over the past decade.

Once the weevils have fully established themselves in a new country, it becomes much harder to stop them. Adult weevils can be killed using insecticides and traps, “but what many farmers don’t realize is that once you put the pressure on the weevil, you’ve really got to keep it on,” Hoddle says, until they’ve been fully eradicated.

Truly ridding a region of weevils requires not only resources and access to the right sprays and lures, but also coordination among farmers within each country and across national borders. That’s where the FAO comes in, says Shoki Al Dobai, an FAO officer who helped organise the recent conference in Rome.

And the race to beat the weevil is on, Al Dobai notes. “Now we have around 60 countries that are affected by this pest,” Al Dobai says. “And because of climate change, the pest is able to spread to countries where before the weather wouldn’t have allowed for them to survive.” As certain regions get hotter, and in some cases wetter, the weevils — which fare best in tropical climates — have begun to venture into territories where they couldn’t have before, such as desert regions of the United Arab Emirates.

At the FAO conference, agricultural ministers and farmers agreed on a strategy to combat the weevil by improving monitoring of its spread and a proposed ban on the import of palms larger than 6cm wide from infested countries.

To enforce this, the FAO is funding and training farmers “especially in the Middle East and North Africa,” Al Dobai says, where the infestations have been especially damaging to the economy.

In Saudi Arabia, Eljiati’s farm has partnered with the national ministry of agriculture to help educate and train farmers across the country and abroad. “At the same time that we are helping our neighbors to clean and treat their farms, we are also protecting ourselves from weevils coming back to us from other farms,” Eljiati explains. “This is helping everybody.”