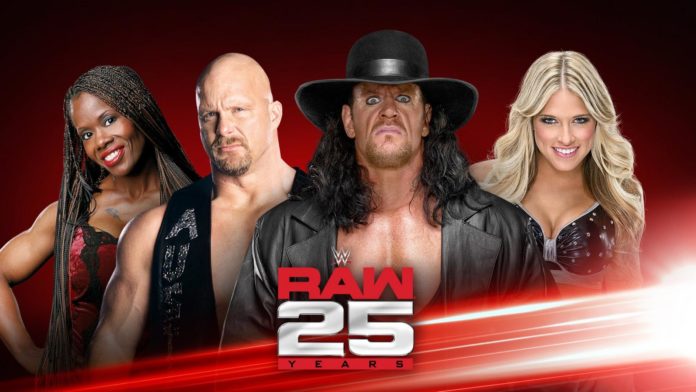 “Stone Cold” Steve Austin and The Undertaker will lead a cast of legends on Raw’s 25th anniversary show, live on Sky Sports Arena at 1am on Monday night.

Nostalgia will be high on the agenda when WWE celebrates 25 years of live programming at the Barclays Center in New York, with a huge cast of old favourites scheduled to appear.

Legendary commentary duo Jim Ross and Jerry “The King” Lawler will take a spell on microphone duty and from the women’s division the Bella Twins, Torrie Wilson and Trish Stratus will be among the returning superstars.

But there will be some modern-day issues to be resolved too, with Roman Reigns due to defend his Intercontinental title against The Miz.

The self-styled Hollywood A-lister made his return to Raw last week and immediately set his sights on reclaiming his crown from the Big Dog.

Reigns has made a name for himself as a fighting champion since taking the belt from Miz, enjoying a string of excellent title defences on Raw against opponents such as Cesaro, Elias and Jason Jordan.

Free agent John Cena will also be making an appearance on Raw, while all of SmackDown’s champions will be in New York for the showpiece event.