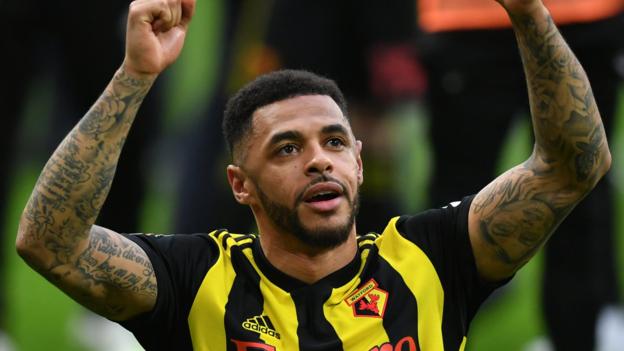 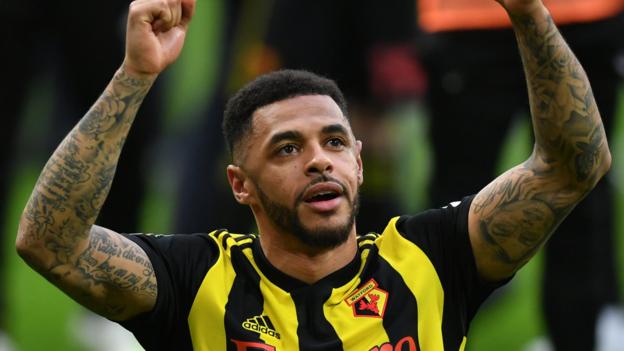 Watford striker Andre Gray says it is down to players to help combat racism in football after years of it being “brushed under the carpet”.

Gray, speaking to BBC Football Focus about Saturday’s FA Cup final with Manchester City, praised their forward Raheem Sterling for helping “set the standard” on what needs to be done.

England winger Sterling has scored 23 goals for the Premier League and Carabao Cup winners this season, and has become a role model for speaking out about racism. He criticised the media for the way they report on black players after being allegedly racially abused by Chelsea fans.

In 2016, Gray criticised some fans of his then team Burnley as being from the “stone ages” after they allegedly made racist comments to a Bradford player.

Citing modern players’ influence on social media platforms – Sterling has more than five million Instagram followers – Gray said: “I feel like we are in a modern day era now where we are more powerful than the media and I think Raheem Sterling showed that with the backing he’s got from it.

“He’s set the standard now for what needs to be done and gave it the exposure it needs.”

Gray says he agrees with Sterling that walking off the pitch is not the answer to racist abuse.

“If it is fans we are getting abuse from they win because they laugh and we get looked at differently,” he said.

“We live in a world where it’s never going to go, it’s always going to be there, it’s just about fighting against it. Probably for us in our situation the biggest way to do that is through success. But I’d back any of my team-mates for whatever they wanted to do.”

Gray, 27, faces the biggest game of his career on Saturday, having been a non-league player with Hinckley and Luton until joining Brentford in 2014.

Watford have never won a major trophy, having finished second in the top flight in 1982-83 and losing the FA Cup final in 1984.

When asked how he would feel if they win in the FA Cup, he said: “I haven’t even thought that far. I don’t think you can put it into words.

“I am just focusing on the game for now and hopefully I’ll walk out with that medal and then I can start to think about how I feel. We know it’s our last game and our only chance to do something special.”

“I was getting a bit of stick in the first half,” he said. “I really wanted to shove it back up them but it’s part of football. It was sweet because it is my hometown and it’s a bit of bragging rights with family and friends but it didn’t matter who we played, it was about getting to the final and we did that.

“It’s surreal. It wasn’t until after the game when you have to sit down and think how far we’ve come. It’s the oldest cup in football and we’ve got a chance of winning it.

“I don’t think we will appreciate it as much until we retire and look back at how special these days were, because not everyone gets to do it.”

Opponents Manchester City are looking to win the first English domestic treble, having won the Carabao Cup in February and Premier League at Brighton on Sunday.

“If anyone has watched our games against the top six teams, we have played well against them,” said Gray. “We’ve probably just not taken our chances as ruthlessly as we can.

“You’ve just got to look at it as one game, completely different to the league game. It’s a weird thing that goes through your head in a league game in our position [Watford finished 11th]; you can sometimes write certain games off knowing that you’ve got bigger games to come against teams around us. But this is one game.

“They’re beatable, they’ve obviously been beaten this year. They are the best team in the league and they have proved that for two years now and we know what we’re in for but the longer we can contain them the better it is for us.

“We watched the Brighton game and they did well even after scoring so early. We believe if we were in that position we’d be able to kick on and get the goal so I don’t think there is any specific plan.

“You have to go in and it’s just pure belief and desire, just to not give up and that’s one thing we do well and we’re just going to keep fighting. They might score, they might not, it’s just about keeping our heads up if they do score and just staying in the game as long as possible.”

You can watch the full Football Focus interview on Saturday at 13:00 BST, which leads straight into the FA Cup final build-up – all on BBC One. Kick-off is at 17:00