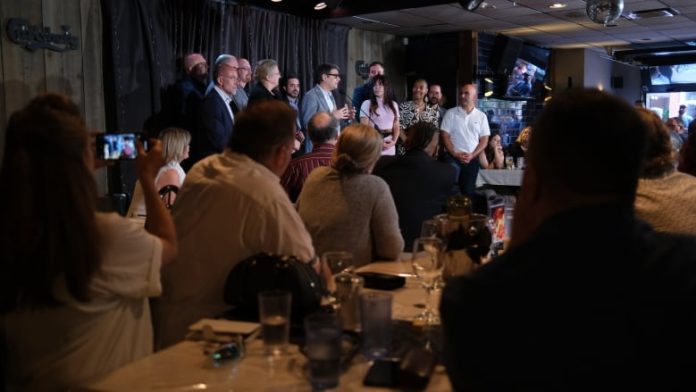 When Éric Duhaime took over as leader of the Quebec Conservatives last year, the party had never held a seat in the legislature, never been invited to a major debate and never raised more than $60,000 in donations in any given year.

It was, basically, a fringe party, unaffiliated with the federal Conservatives and considered too libertarian for most Quebec voters since it was formed in 2009.

In the last 15 months, though, Duhaime’s party has wrangled a seat in the legislature, started polling near 20 per cent. It has racked up nearly $500,000 in donations this year alone.

Duhaime, a former shock-jock radio host, was an early critic of Quebec’s public health restrictions. As leader, he has continued to downplay the severity of the pandemic and the need for safety measures.

Now, as a fall election nears, he is welcoming into the party a slew of candidates who appear to be even more radical in their opposition to medical expertise and reigning democratic norms.

Of the first 54 candidates the party has announced, nearly 30 per cent have used their social media accounts during the pandemic to amplify medical misinformation, conspiracy theorists or to engage with far-right extremists, a CBC News investigation has found.

The surge in popularity for Duhaime’s party comes as conservative libertarians across the country, at both the provincial and federal levels, are feeling emboldened by frustrations at pandemic restrictions.

Recent polling suggests anti-mandate libertarians, at both the federal and provincial levels, are attracting support of Canadians who are distrustful not just of government regulations, but of scientific authorities, mainstream media outlets and democratic institutions in general.

On a recent Friday afternoon, Jean and Paula Pépin lingered at a restaurant in Joliette, Que., about 90 kilometres northeast of Montreal, for the chance to speak with Duhaime.

They had driven an hour to attend a rally where the party leader introduced six new Conservative candidates for the October election.

“We weren’t interested in politics before, but with everything that’s happened we wanted to get involved with the Conservatives,” said Paula Pépin, 61.

“I call it the plandemic. It’s not a pandemic. It was prepared beforehand,” she added, referring to a conspiracy theory that maintains a shadowy circle of elites deliberately arranged the pandemic in order to grab more power.

A recent study, based on polling data, found that 50 per cent of the party’s supporters were either “convinced” or “moderate” adherents of conspiracy theories.

Among Quebec Liberal supporters, 31 per cent were classified as conspiracy theorists and so were 29 per cent of Parti Québécois supporters.

The study was conducted by researchers affiliated with the UNESCO chair in the prevention of radicalization, housed at the University of Sherbrooke, and examined how the pandemic has influenced conspiracy theory movements in Quebec.

“In my speeches I never go there. I never talk about those things,” he said in an interview with CBC News.

On social media, he defends discredited doctors in the name of free speech and occasionally circulates articles from websites known for spreading disinformation, such as National File and Becker News.

The event in Joliette, as are most party events, was emceed by Anne Casabonne, a former television actress who has become known for pushing misinformation about COVID-19 vaccines.

Before deleting her original Twitter account last year, Casabonne posted dozens of tweets that expressed doubts about the effectiveness of the vaccines and exaggerated the risks of side effects.

She also pushed for the use of ivermectin, an antiparasitic agent used primarily to deworm livestock, even though health authorities warn against its use to treat COVID-19.

Several links remain on her Facebook page to a group, Reinfo Covid, a group that experts in immunology and public health say has made several misleading claims about the safety of vaccines in children and adults.

Casabonne will be the Conservative candidate in Iberville, a riding south of Montreal, currently held by the party’s lone MNA, who is not running for re-election.

More than a dozen other candidates the party has put forward for the coming election have used their social media accounts to circulate different types of misinformation and disinformation.

These Quebec-based outlets and individuals are listed as conspiracy theorists in the study published by the UNESCO chair in the prevention of radicalization.

Chantal Dauphinais, the candidate in Beauharnois, took part in an event organized by another conspiracy theorist identified in the Sherbrooke study, Samuel Grenier.

In a video shared on her Facebook page, Dauphinais is seen helping him print, fold and distribute copies of an op-ed riddled with inaccuracies about COVID-19 that had been withdrawn from the Journal de Montréal‘s website.

Less than a week after the event, the Conservatives announced her candidacy.

Along with sharing misinformation about vaccines on her own Facebook page, Marie-Renée Raymond, the party’s candidate in René-Lévesque, has contributed regularly for the past year to a Facebook group called Matane, tous contre le passeport vaccinal et la fausse pandemie (Matane, everyone against the vaccine passport and the fake pandemic).

Here she has shared content from Théo Vox, Reinfo Covid and Qactus, a website inspired by QAnon, the conspiracy theory that maintains the world is run by a secret network of child-sex traffickers.

Other candidates have used their social media accounts to engage with figures on the far-right of the political spectrum.

Myriam Cournoyer, the Drummond-Bois-Francs candidate, has repeatedly retweeted a contributor to Le Harfang, a white nationalist publication in Quebec.

One of the party’s star candidates, Dr. Karim Elayoubi, lauded a program hosted by Gilbert Thibodeau and broadcast by Andre Pitre, a conspiracy theorist listed in the Sherbrooke study who is associated with Quebec’s far-right.

In the March 2021 program, the host made racist comments about Chinese people and suggested the pandemic was planned by a cabal of elites.

“Excellent show,” Elayoubi said in a tweet he later deleted. It was retrieved by CBC News using the Internet’s Wayback Machine.

In other since-deleted tweets, Elayoubi compliments and interacts with Alexandre Cormier-Denis, a white nationalist who advocates racist theories and disinformation about the pandemic.

Of the candidates the party had announced by July 18, CBC News tallied 16 who used their social media accounts more than once to amplify or circulate problematic information about COVID-19, the U.S. election and Russia’s invasion of Ukraine.

Last week, the Quebec Conservatives ejected a candidate, Jessica Victoria-Dubuc, after local media reported she had claimed in a Facebook post that Bill Gates was organizing a pandemic of the Marburg virus and saying that she was “at war” with elites.

But even before that post, Victoria-Dubuc had repeatedly shared incorrect information about COVID-19, indicated her support for Grenier and Charland and pointed followers to a QAnon-affiliated website.

CBC News shared its research with the Conservative party, and asked what policies guide how their candidates should use social media.

The party replied that its candidates cannot use their accounts to promote hate or violence.

“We are happy to see that none of these 16 candidates crossed that line,” a spokesperson said in an email.

For the majority of the Conservative party’s candidates, the opposition to public health measures is based on libertarian principles rather than conspiracy theories.

“But from a policy perspective, why do we need these hindrances if the vaccines are working?”

Outside of Quebec, other libertarian-minded politicians are also trying to capitalize on pandemic fatigue by holding out the promise of no more vaccine mandates and ending other health restrictions.

In Ontario, two anti-mandate parties — the New Blue Party and the Ontario Party — competed for votes in the last election. Keystone, a new party with a similar platform, was officially registered in Manitoba earlier this month.

In Alberta, anti-mandate libertarians Danielle Smith and Brian Jean have emerged among the early front-runners in the race to replace Jason Kenney as leader of the United Conservative Party.

But in appealing to anti-mandate sentiment, these political figures have also attracted supporters who are stridently anti-vaccine for reasons that involve conspiratorial thinking rather than political principles.

A poll by Abacus Data, released last month, found that belief in conspiracy theories was higher among Canadians who identify with the right, among supporters of the People’s Party of Canada and among Pierre Poilievre supporters in the federal Conservative leadership.

Poilievre, the front-runner in the federal Conservative leadership race, drew criticism last month when he briefly marched alongside James Topp, a former soldier who has refused to be vaccinated because he doesn’t believe the vaccines are safe and effective, despite scientific evidence suggesting otherwise.

Smith turned heads when she recently appeared alongside former NHLer Theo Fleury at a campaign event in Calgary. Last year, Fleury posted on Twitter that linked vaccine passports to pedophilia.

“There’s some alignment with libertarians and I’ll call them [vaccine] skeptics, though they do veer into conspiracy theories,” said James Johnson, a former adviser to the Wildrose and the United Conservative parties.

Back in Quebec, Conservatives are sending a message that is less ambiguous.

They are asking voters, in a general election, to endorse a slew of candidates who have contributed to the conspiracy culture that has flourished during the pandemic.

“Our candidates come from different professional backgrounds and have a diversity of opinions, which reflects Quebec society,” the party said in its statement to CBC News.