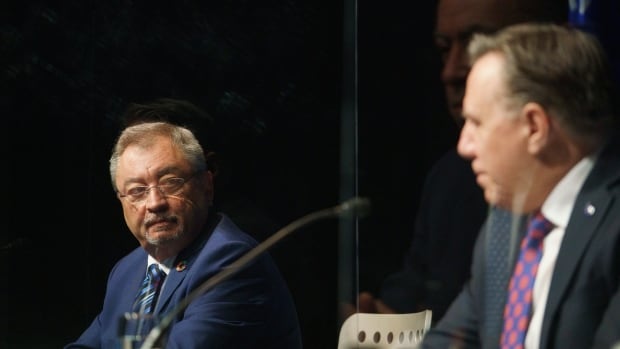 Arruda submitted his letter of resignation on Monday as the Omicron wave continued to overwhelm hospitals across the province, forcing the health-care network to postpone surgeries and other medical services.

In his letter, Arruda wrote that should the premier wish, he would continue to serve. A spokesperson for Legault confirmed to CBC News that the premier accepted his resignation.

CBC will be carrying the news conference live here at 1 p.m. ET with English translation.

Arruda has held the position for nearly 12 years. He was reappointed to another three-year term in June 2020.

Legault is expected to appoint Dr. Luc Boileau, the head of the the province’s health-care research institute, the INESSS, in the interim, Radio-Canada has learned.

Quebec Liberal Leader Dominique Anglade tweeted on Monday her thanks to Arruda, saying he put aside “his life and his family for all of us” during the pandemic.

However, she criticized Legault, accusing him of trying to make Arruda carry the blame for recent failures in pandemic policy.

“The departure of Dr. Arruda will not solve anything. Decisions are made by [Legault] and should be based on science and not polls and gut feelings,” Anglade wrote.

During recent news conferences, Legault has been routinely asked if he still has faith in Arruda and the premier has defended him.

Another opposition party, Québec Solidaire, has also shown their support for the outgoing director of public health.

Leader Gabriel Nadeau-Dubois tweeted his thanks to Arruda for his dedication to the province’s “long neglected and underfunded” health-care system.

“Throughout this pandemic, he served Quebec with sincerity. It was the CAQ (Coalition Avenir Québec) government that made the decisions,” Nadeau-Dubois wrote.

“Arruda sacrificed himself for the bad decisions of the government,” agreed Paul St-Pierre Plamondon, the leader of the Parti Québécois, on Twitter.