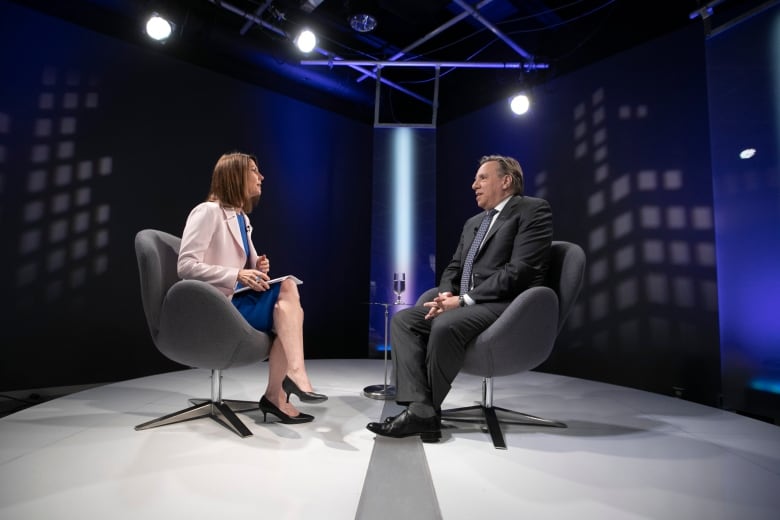 Quebec Premier François Legault described his government’s religious symbols law as a moderate response to the concerns of a majority of the province’s residents. (Ivanoh Demers/Radio-Canada)

Quebec Premier François Legault says he doesn’t “really” believe Muslim women in the province who say they’ve been the target of Islamophobic incidents since the government passed a law making it illegal for some civil servants to wear religious symbols.

Several Muslim women who wear either the hijab or niqab have told CBC News that since the legislation was tabled in March, they’ve been harassed, made the target of hateful comments, even spat on.

A women’s advocacy group, Justice Femme, recorded more than 40 Islamophobic incidents around Montreal between late March and early May.

Muslim community leaders have shared stories on social media that suggest the incidents of harassment have not died down in the two weeks since the law came into effect.

Legault was asked Thursday on CBC Radio whether he believes the new law — which bars public teachers and other authority figures from wearing religious symbols — makes some Quebecers more vulnerable to racism.

“For the people dealing with this bill … they say that they have received a greater level of harassment and intimidation and even attacks since the bill passed,” the host of CBC Montreal’s Daybreak, Ainslie MacLellan, told Legault.

“Do you believe those stories — that they are actually facing these things?”

The premier went on to describe the religious symbols law as moderate, because it applies only to a small number of civil servants: public schoolteachers, school principals, government lawyers, police officers, judges and wildlife officers are prohibited from wearing signs of their faith.

“[The law] is quite similar to what we have in Belgium, in France, in Germany,” Legault said.

He was referring to laws in Belgium that ban face-covering veils in public. A similar ban exists in France, where it is also illegal for students and teachers to wear religious symbols in state schools. Several German states have implemented their own limits on where religious symbols can be worn.

“When I hear some people saying that Quebec [is becoming] racist, does that mean Germany, France and Belgium are racist?” Legault asked.

Debra Arbec asks Legault if he can empathize with people who will have to remove their religious symbols to apply for a job as teacher or police officer. 0:55

In a separate interview — a televised exchange with CBC Montreal News at 6 host Debra Arbec — Legault suggested that the lack of restrictions on religious symbols is partly to blame for the rise of right-wing extremism in the U.S.

“They don’t have the kind of law we put in place or that they put in place in France, and they have extremism,” Legault said. “Even the president sometimes has said comments that can be close to racism.”

(Legault made no mention of the results of the recent European parliamentary elections, in which an anti-immigrant, far-right party won the largest share of the vote in France.)

The premier described Quebec’s law as a “framework” that will help exclude racist views from mainstream debate. 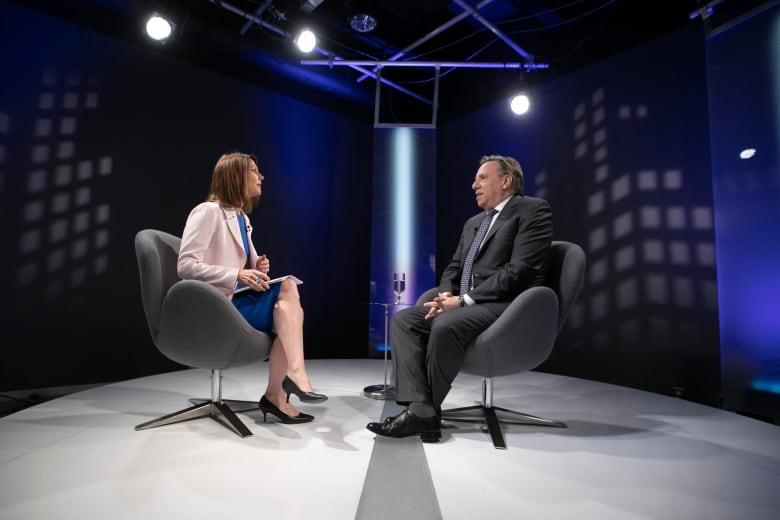 CBC Montreal News host Debra Arbec asked Legault whether he empathized with those affected by the law. (Ivanoh Demers/Radio-Canada)

Arbec asked ​​​Legault repeatedly whether he had empathy for the people affected by the law’s employment restrictions, such as Muslim women who wear the hijab.

“They can wear [a hijab] at home. They can wear it in public places. We say if you really don’t want to remove it, there are four jobs where you can’t apply. That’s it, that’s all.”

Legault’s comments in the two CBC interviews drew an angry reaction from Justice Femme, the advocacy group that recorded the spike in harassment against Muslim women.

“Mr. Legault doesn’t want to face the reality that is staring him in the face,” said Hanadi Saad, the group’s president.

“He is living in complete denial, and we hold him accountable for what Muslim women are going through. His denial only aggravates the problem.”

Legault maintains the law, despite the controversy it has raised, will allow the province to turn the page on a decades-long debate about how to accommodate the cultural practices of religious minorities.

“My real objective is to speak, starting next fall, about education, about the economy. These are the real priorities,” he said Thursday.

Legault’s government was hoping to shield itself from a challenge of the law under the Canadian Charter of Rights and Freedoms, by invoking the notwithstanding clause.

But human rights lawyers have challenged it, in spite of the clause’s invocation. Next month, lawyers for a Muslim advocacy group and a civil rights organization will appear in Quebec Superior Court to argue the law should be the subject of an injunction pending a more thorough consideration of its constitutionality.