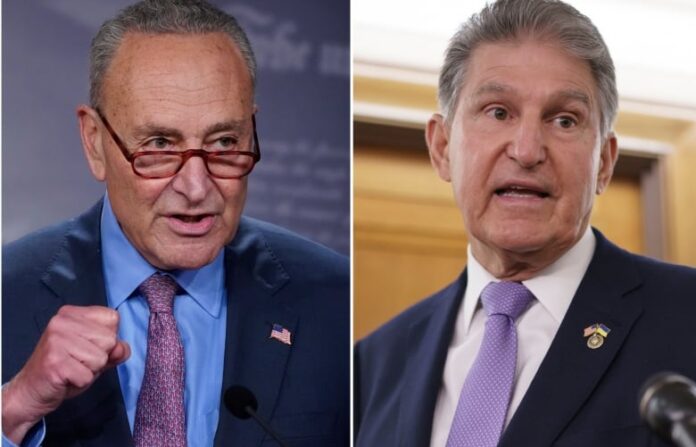 The massive climate and tax deal announced this week by Democrats in the U.S. Senate should inspire Ottawa to adopt a bolder approach to fighting climate change, some experts say.

The $369 billion deal, unveiled on Wednesday, came as something of a surprise after prior versions of President Joe Biden’s proposal failed to gain the approval of holdout Democrat Sen. Joe Manchin of West Virginia.

Manchin now says he can support a scaled-down version of the plan — which would still be, by far, the most ambitious suite of programs to address climate change in U.S. history if it’s adopted.

The package includes massive investments to help create new sources of clean energy, to ramp up production and sales of electric vehicles and to compensate low-income communities most burdened by the effects of a warming planet.

“I’m hoping this will inspire the Canadian government to review our climate policies and maybe look for opportunities to increase investments.”

How Canada could build on a ‘timid’ approach

Both the U.S. and Canada are seeking to cut greenhouse gas emissions by 40 per cent below 2005 levels by 2030. But the two nations are taking different paths toward that goal.

The cornerstone of Ottawa’s approach is a federal carbon pricing system that will rise steeply from its current level of $50 per tonne of emissions to $170 by 2030 in order to push consumers toward cleaner energy sources.

In the U.S. — where a federal carbon tax has never been considered viable, for political reasons — the Biden administration is instead attempting to clean up emissions by spending its way into change through enormous investments in green technologies.

That’s an aggressive tactic that ought to play a larger role in Ottawa’s strategy, said Eddy Pérez, the international climate and diplomacy manager at Climate Action Network Canada.

“When it comes to major de-carbonization investments, we have a very timid approach,” said Pérez.

By stepping up direct investments in technologies that reduce emissions, Pérez said, the U.S. government could present the fight against climate change as a “public service” — which also could create an expectation of public accountability as initiatives are rolled out.

“Here what the United States is saying is … Congress and the public, we have a role to play to unlock the set of climate investments that are going to get us to the 40 per cent target,” he said.

In Canada, customers can receive purchase incentives of up to $5,000 for buying a new electric vehicle.

Washington’s plan also provides tax incentives for a broad price range of vehicles. Electric passenger cars priced below $55,000 and pickup trucks, SUVs and vans priced up to $80,000 would all qualify.

In Canada, passenger vehicles are subject to the same $55,000 limit but larger vehicles must have a base model price below $60,000 to qualify.

The U.S. incentive only applies to vehicles produced in North America, however, while the Canadian program does not consider a vehicle’s manufacturing location.

Ottawa should view the more generous U.S. incentives as the start of a healthy competition to see which country can get more electric vehicles on North American roads, the experts said.

Researchers have said these communities are disproportionately affected by climate change for various reasons, including pollution near ports (which tend to be closer to these communities) and a lack of access to safe housing and food.

“This has been a blind spot for Canada and something we can definitely look to the U.S. and build on,” Guo said.

In a statement issued to CBC News, Environment Minister Steven Guilbeault applauded news of the U.S. deal but did not outline any additional measures Ottawa would consider if the plan is finalized.

“News of the … historic climate and energy bill in the U.S. is a very welcome development for Canada,” Guilbeault said in the statement.

“It reinforces our government’s approach to transitioning to cleaner forms of energy, which is already generating new economic opportunities.”

Critics say neither Canada nor the U.S. should be content with their current approaches and argue both nations’ climate plans are too lenient with pollution-heavy fossil fuel industries.

The Intergovernmental Panel on Climate Change also has called on nations to “at least halve emissions by 2030” to avoid the catastrophic effects of a warming climate — a target that exceeds official plans in Ottawa and Washington.

“On both sides, the United States and Canada, this is the bare minimum,” said Pérez.