Prograis: ‘I definitely do want to fight a big name right now’ 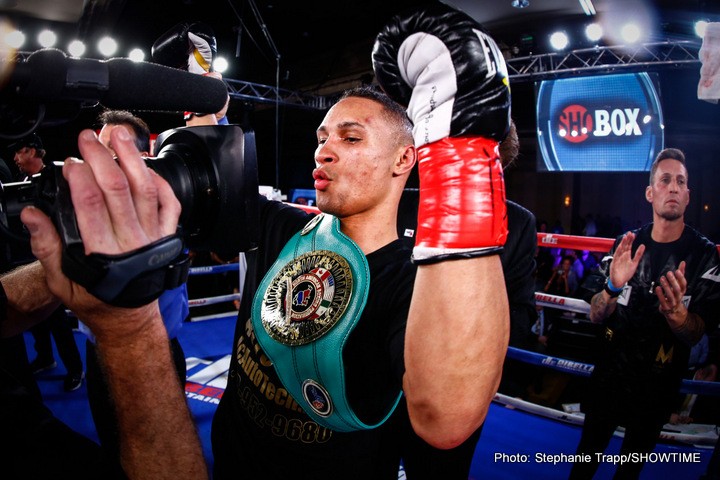 Junior welterweight contender Regis Prograis is trying to get a title opportunity.

It is just the kind of major fight Prograis is aching to be part of, but it’s not going to be easy for him to get a fight of that caliber because he does not yet bring big money to the table and he is a dangerous opponent for anyone at 140 pounds.

Prograis is the epitome of high risk, low reward. He is the exact kind of fighter for whom mandatory positions were created, because he is just the kind of guy who probably will get a world title shot only when a titleholder is forced to face him.

If Prograis (20-0, 17 KOs) could have any fight he wanted, he would take on Garcia or a match with unified junior welterweight world champion Terence Crawford.

“I definitely think I would beat Garcia. I think I’ll hurt him,” Prograis told ESPN at ringside after watching Garcia’s masterpiece against former four-division titlist Broner. “[Garcia] has a lot of holes. I felt like he faded in the later rounds against Broner. He was getting hit a little more that he was earlier in the fight and he doesn’t have a strong defense. Broner fought to survive. He fought not to get knocked out.”

The chances of Prograis getting a fight with Garcia any time soon are extremely slim, but he is in the position for a title eliminator that the WBC will soon order, probably against Amir Imam.

“I’m just waiting,” Prograis said. “I’m ranked No. 2 in the WBC and I guess for me to get a title shot it will depend on what Crawford is going to do.”

Crawford will face Julius Indongo on Aug. 19 (ESPN) to unify all four belts in the weight class. The winner could end up vacating or being stripped of belts, so if Prograis wins an eliminator, he would either be ordered to eventually face the Crawford-Indongo winner or to fight for a vacant belt.

While he works on his game, he just wants his title shot.

Those who watch Showtime’s “ShoBox: The New Generation” series know Prograis well. He has excelled each time he has boxed on the show, never more so than in his last fight on June 9.

In what many thought would be a highly competitive fight that could go either way, Prograis faced then-undefeated Joel Diaz Jr., a highly touted up-and-comer. Prograis reduced him to rubble in the second round, knocking him down four times for the biggest win of his career.

“I knocked Joel Diaz out in the second round. I feel I showed a lot in that fight and I feel like I am ready for a big name,” Prograis said. “I see a lot of holes in these fighters’ games. They are holes I feel like I can exploit.”

Prograis, a 28-year-old southpaw, grew up in New Orleans but was forced to relocate during Hurricane Katrina and moved to Houston, where there is a thriving boxing community and plenty of good gyms at which to train and spar. When members of his family eventually moved back to New Orleans, Prograis remained in Houston to take advantage of the top-notch training and sparring he could get there.

Promoter Lou DiBella has watched his career blossom and gushes over him more than just about any fighter he has worked with in years.

“I’ve been in this business for a long time. He has superstar potential,” DiBella said. “He has that potential because he knocks people all over the ring and he has skills. He’s somewhat unorthodox but in an exciting way. He has raw athletic ability. He said after the Diaz fight that he is the boogeyman of the junior welterweight division. He is. He’s a badass and he’s fun to watch.

“As promotable as he is, he’s also on the road to being an established name. So we both know he needs a title elimination bout to help build the demand for the big fights he wants. He believes he belongs in there with the best guys right now and he’s probably right, but until they are forced to fight him or the money is so good to fight him they’re going to wait.”

DiBella said they would abide by whatever the WBC orders and look to make the fight, whether it’s against Imam or possibly Viktor Postol or Adrian Granados. He said the eliminator probably would take place in November because of the length of time it would take to go through negotiations, to have a possible purse bid and then to schedule the fight.

“Regis has got a swagger to him and he’s tremendous athlete,” DiBella said. “Diaz was a top amateur and a pretty good fighter and Regis just kept knocking him down with bursts of combinations and angles and bombs. It was a statement win, man. There was no mercy in that fight. He was like, ‘I am here! I have arrived!’ “