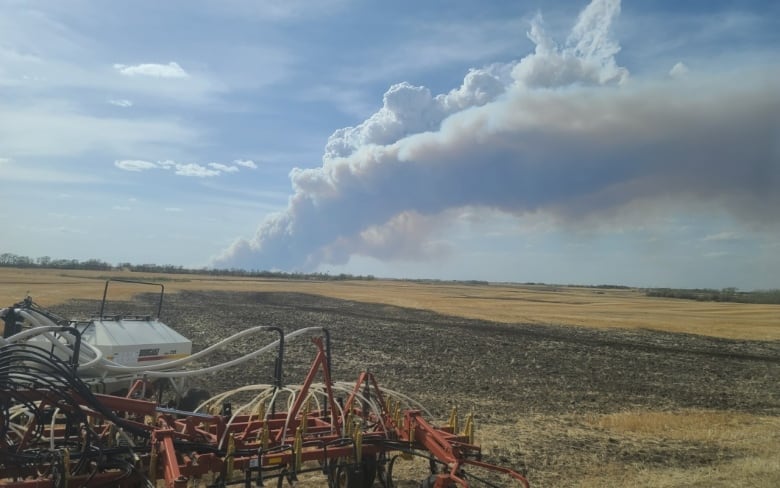 The city of Prince Albert has ordered residents in about 34 homes just north of the city to evacuate due to a wildfire.

The evacuation order affects people in the rural municipality of Buckland, Sask, where the fire is raging. Prince Albert Mayor Greg Dionne said hundreds of people have been told to get ready to evacuate if the wind changes.

The wildfire, which started at about 2.30 p.m. CT, had reached about four square kilometres in size by Monday evening, Dionne said.

“We’re fighting a monster…it’s very dry out there,” Dionne said. “The problem is with a fire of this size, it starts to create its own wind in the front of it as it burns. So that even makes it worse and more dangerous.”

He said the fire is at the mercy of the weather, including high winds, scheduled for Tuesday.

People who live and work north of highway 55, east of Cloverdale Road and west of the Honeymoon Road are being asked to evacuate and find their own accommodations by using Highway 2. People are being directed to the Margo Fournier Centre, 1211 1st Ave West where they will be asked to register and receive further instructions.

On Monday evening, Marilyn Boyer packed up valuables from her business, Garden of Dreams Greenhouse, as a fire raged across Highway 55 from her.

“Right now, it’s pretty scary. We’re right across the road from the fire, if it jumped the highway we’ll be …” she said, trailing off. “I’m getting my pictures and everything like that ready right now. Ready to evacuate. Scary. It’s really scary.”

Prince Albert’s city council voted at 6:30 p.m. CT to declare a local state of emergency as the fire is at risk of spreading and required prompt action, the city said.

A spokesperson with the Prince Albert Fire Department said city crews are battling the fire in the area of Evergreen Road north of Prince Albert, just past Red River Park. People are being asked to avoid the area.

The province has sent three water bombers, a helicopter, spotter plane and firefighters toward the fire.

Dionne is warning people to take three days worth of clothing when they evacuate as they may be in a hotel for days, he said.

One woman drove through the fire on her way home from work from her job at Candle Lake, about 80 kilometres northeast of Prince Albert.

Madison Simpson, 19, was at her job at a convenience story in the resort community when the power went out. Simpson thought that was strange so she and her boyfriend, who also works at the store, packed up and headed back to Prince Albert.

“The smoke was getting worse and worse and then we realized we’re heading straight towards it,” Simpson said.

“It got scarier and scarier because (the sky) was great blue and we were driving and then out of nowhere it was just dark. There was fire on both sides.”

5:37 PM: Crews are working hard to repair damage caused by a fire but are unable to provide a restoration time for power in Waskesiu, Meath Park, Paddockwood, La Ronge, Stanley Mission, and all surrounding rural areas <a href=”https://twitter.com/hashtag/skoutage?src=hash&amp;ref_src=twsrc%5Etfw”>#skoutage</a>

Simpson said she saw people in cars pulling out of their driveways and heading to Prince Albert. She said the sky had an orange hue, and the experience was like something out of a movie.

“We were pretty shook up after it. Now we’re just kind of like, well, that was scary. We’re just hoping that everyone in that area stays safe,” she said.

The Prince Albert Police Service is also asking drivers to avoid the area of Highway 55 East, between Prince Albert and the area around the Pulp Haul Road, due to a large fire in the area.

RCMP members are in the area helping with traffic.

CBC Saskatchewan contacted nearby Buckland Fire Department but as the members were fighting the fire they were unable to comment.