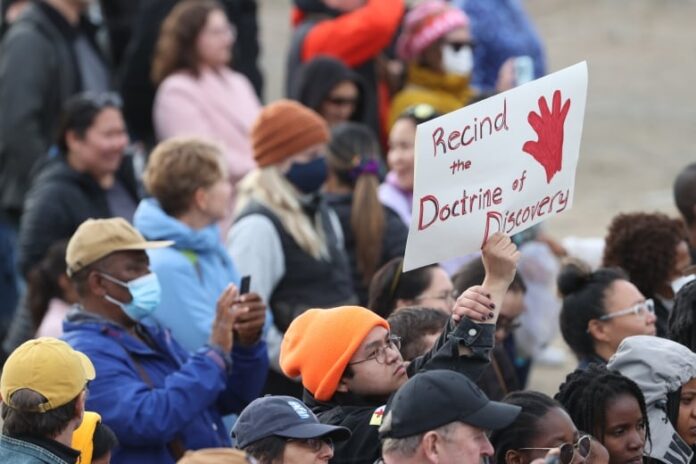 While the word genocide wasn’t heard in any of Pope Francis’s addresses during a week-long trip to Canada, on his flight back to Rome, he said everything he described about the residential school system and its forced assimilation of Indigenous children amounts to genocide.

“I didn’t use the word genocide because it didn’t come to mind but I described genocide,” Pope Francis told reporters on the papal flight from Iqaluit to Rome on Friday.

Over the last week, the Pope visited Edmonton, Quebec City and Iqaluit on a “penitential pilgrimage” of healing, reconciliation and hope between the Catholic Church and Indigenous people.

While addressing residential school survivors and their families in Maskwacis, Alta., Francis expressed deep sorrow for harms suffered at the church-run schools and asked for forgiveness “for the wrong done by so many Christians to the Indigenous peoples.”

The Catholic Church ran over half of the residential schools in Canada. More than 150,000 First Nations, Métis and Inuit children were forced to attend the government-funded schools between the 1870s and 1997.

The Truth and Reconciliation Commission, which released its final report in 2015, concluded that the school system amounted to cultural genocide.

Since 2021, when the discovery of hundreds of unmarked graves at former residential school sites waved across the news, many are calling what had transpired more than cultural genocide. Last year, NDP member of Parliament Leah Gazan made a failed bid for Parliament to recognize the residential school experience as genocide, as she believes it meets the definition of genocide drafted by the United Nations.

The United Nations defines the term as a number of acts committed with the “intent to destroy, in whole or in part, a national ethnical, racial or religious group” such as killing members, inflicting bodily or mental harm to members, deliberate physical destruction in whole or in part, imposing measures intending to prevent births within a group, or forcibly transferring children of the group to another group.

The National Centre for Truth and Reconciliation in Winnipeg, which holds the records gathered by the TRC, has documented 4,118 children who died at residential schools thus far.

In his multiple speeches over the week, Pope Francis described the school system as a policy of assimilation and enfranchisement, and that it harmed families by undermining their language, culture, and worldview.

“Yes, it’s a technical word, genocide. I didn’t use it because it didn’t come to mind. But yes, I described it. Yes, it’s a genocide.”

Rescinding the Doctrine of Discovery

Indigenous people from coast-to-coast-to-coast have been calling for papal bulls that make up the Doctrine of Discovery to be rescinded.

The calls grew louder at each stop of the papal visit, with arguments being made that the papal bulls, or edicts, are the root cause of genocide against Indigenous peoples and laid the foundation for Canada to establish assimilation policies like the residential school system.

When asked about issuing a statement on the Doctrine of Discovery, Francis did not answer the question directly but talked about it as a doctrine of colonization.

“It’s true, it’s bad. It’s unjust. Even today it’s used,” he said. “That mentality, that we’re superior and Indigenous people don’t count, that’s why we have to work on … what was done that was bad, but with the awareness that even today, that same colonialism exists.”