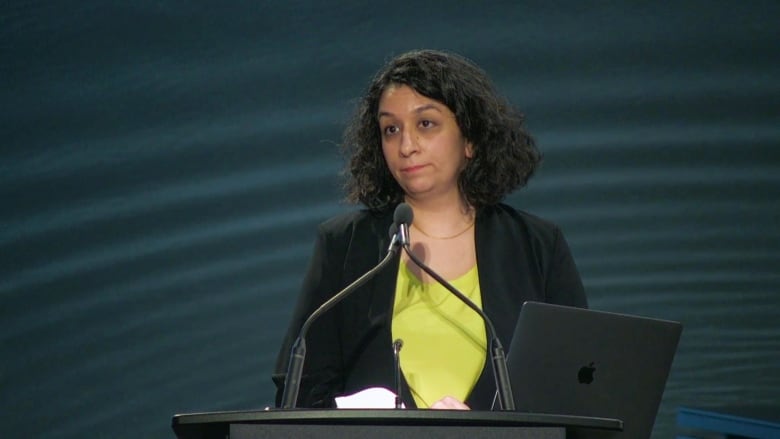 The union representing front-line RCMP officers who responded to Portapique, N.S., in April 2020 says it doesn’t want those members to testify at the public inquiry into what happened during the shootings and the search for the gunman.

Nasha Nijhawan, a lawyer with the National Police Federation, told the Mass Casualty Commission there’s a real risk the 17 officers being asked to testify by lawyers for the victims’ families could be re-traumatized by testifying.

“Of course it would be best if everybody could explain in their own first-person voice what they experienced, but at what cost?” Nijhawan said Wednesday.

The federation represents regular and reservist RCMP members below the rank of inspector.

Nijhawan said the union hopes to enter two pieces of evidence Thursday to support its argument.

One is a report from Nick Carlton, a professor at the University of Regina and a registered doctoral clinical psychologist in Saskatchewan. He is also the scientific director of the Canadian Institute for Public Safety Research and Treatment.

Nijhawan said Carlton’s report provides necessary information about the potential impact of the original events on the RCMP officers, how they may be dealing with the fallout of that trauma, and what requiring live testimony might mean for them.

The Mass Casualty Commission presented documents this week summarizing what it believes happened in Portapique. They state Gabriel Wortman attacked his longtime partner and proceeded to kill 13 neighbours after she escaped and hid in the woods.

The gunman killed nine more people while disguised as a Mountie the following morning and drove nearly 200 kilometres through rural Nova Scotia, most of it in a decommissioned police cruiser he’d adapted to look like a real one.

The inquiry already has access to a great deal of evidence from the officers who responded, Nijhawan said, including 911 calls, radio logs, and interviews with police and commission investigators.

The union is very aware its members want to serve the inquiry as much as they can, Nijhawan said.

“In fact, they wish so much to be helpful that they may be willing to extend themselves beyond what is appropriate for their own wellness,” she said.

“It would be our submission that you should not ask them to do too much.”

The union is also looking to table results from an internal union survey of the members who have been engaged in the commission interview process over the past several months.

Nijhawan said this report will show the “actual impact” of Portapique on the RCMP members who responded, and make clear the “potential re-traumatization” of officers by going through the inquiry’s process.

Lawyers for the victims’ families said they will argue Thursday that the expert report should not be submitted.

Joshua Bryson, counsel for the family of victims Joy and Peter Bond, said Carlton’s report is “simply not reliable” since he did not interview each of the 17 officers or look at their medical records.

Police have a very difficult job, but part of that job requires testifying about violent crimes in court, Bryson said.

“In our view, it acts as a bar for this commission to fulfil its mandate, which is to understand what happened,” he said.

Bryson added he will contest Carlton’s qualifications as an expert, which was echoed by other lawyers.

Rob Pineo of Patterson Law, whose firm represents most of the other families, said the ability to call RCMP officers should be taken on an individual basis.

The commission can consider their medical records and evidence before deciding on the best way to support them in testifying, Pineo said, arguing that an overall ban is not in the public interest.

“I’m not sure that there would be a lot of faith in the ultimate findings and recommendations of this commission if a blanket expert report was used to block critical evidence,” Pineo said.

On Wednesday, lawyers representing the victims’ families also argued that Lisa Banfield, the gunman’s spouse, must be a witness in the inquiry. The commission has based its preliminary findings on lengthy interviews Banfield gave to the RCMP.