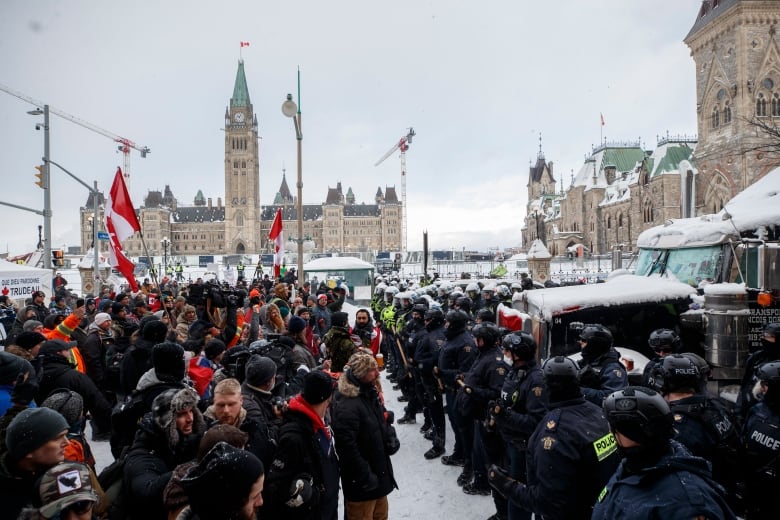 Truck drivers penalized with provincial infractions for their involvement in the weeks-long occupation in downtown Ottawa saw those penalties expire after a week, something critics say is not harsh enough.

Days after Ottawa police pushed protesters out of the city’s downtown, the province’s Ministry of Transportation (MTO) said it had issued a total of 39 suspension and seizure orders to large truck operators — essentially grounding them from operating within Canada.

The penalties seemed in line with Premier Doug Ford’s comment about a week earlier promising “severe” consequences for protesters who had occupied Ottawa’s downtown, including maximum fines of $100,000 and up to a year imprisonment.

CBC News has since learned the orders suspending operations of those large truck operators were lifted just seven days after they were issued. In a statement, MTO confirmed those orders were initially processed between Feb. 18 and 20, the weekend the downtown core was cleared and arrests were made.

It did not say whether there would be additional fines or penalties for those owners and operators.

“This is an outrage and I am going to be raising this with the government,” said Joel Harden, the NDP MPP for Ottawa Centre. “It is unacceptable that people can do these kinds of tactics with large vehicles and face temporary consequences. It’s not OK.”

Harden said the response by the Ontario government pales in comparison to Quebec, which was able to contain protests to one weekend in Montreal and another in Quebec City. He said without more serious consequences in the province, it sends the message to protesters to “come again.”

Stephen Blais, the Liberal MPP for Orléans, observed the penalty was “only a third of the time” many of the truckers actually occupied the streets of downtown Ottawa.

Blais said the province could have done more but chose not to, including charging protesters for the costs incurred by the response to February’s events.

The province has “yet to come forward in any meaningful way with measures to either truly punish those who participated outside of the criminal processes that are ongoing,” Blais said.

So far, just a handful of protest organizers have been arrested and charged by police.

MTO declined numerous requests for an interview with Transportation Minister Caroline Mulroney. In a statement, the ministry said it worked closely with law enforcement “on the best approach to manage the situation.”

“We took a prudent approach, and through the emergency order provided law enforcement with the tools needed to bring the situation to an end,” the statement read.

It went on to say the extent of the charges and penalties imposed were at the discretion of law enforcement.

Bob Chiarelli, a former Ottawa mayor and Ontario transportation minister who has said he’s running again for mayor, argued the province could have issued harsher penalties under the Provincial Offences Act.

“That would have been the easiest way instead of putting more work on the police,” Chiarelli said, adding “the punishment does not fit the crime.”

He also said this will be among the things scrutinized in the eventual inquiry into the response by government and law enforcement.

In a statement to CBC, Ottawa police said penalties are not at the discretion of law enforcement. Convictions and charges are already set out by the Highway Traffic Act.