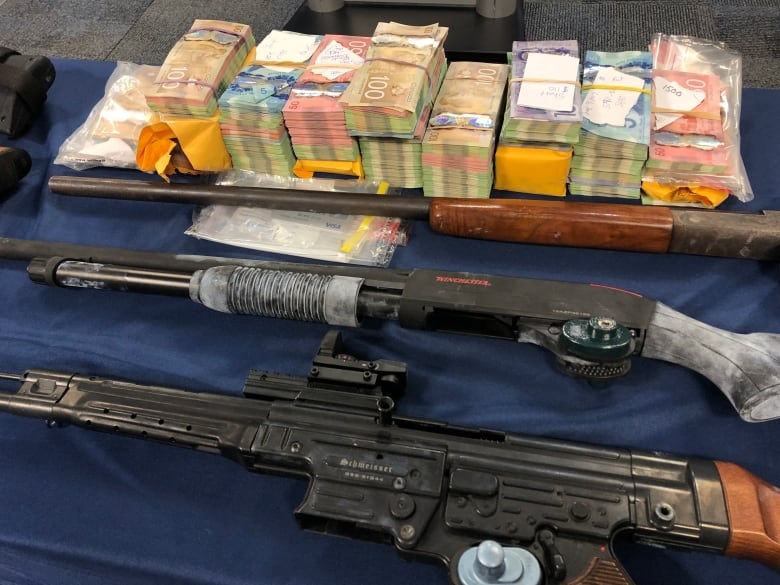 Three men are facing charges of drug trafficking after Winnipeg police raided two homes and seized weapons, drugs, cash, jewelry and a “how-to” instruction manual on the inner workings of the operation.

“I’ve been involved in this unit for many years and I can’t ever recall where there was an instruction manual that was left for us,” said Insp. Max Waddell, head of the Winnipeg Police Service’s guns and gangs unit.

“Basically, it was A to Z,” he added, saying it laid out everything from how the drugs were obtained, to how they were trafficked and how the money was collected.

“Obviously I’m not going to get into the specifics of that because we don’t need to be educating the public on how to run an illicit drug trafficking ring, but it was a very detailed account of what was taking place in this organization.”

It also included instructions on how to evade police and run a successful operation, Waddell said.

Waddell was asked if police learned anything new from the instruction manual — perhaps something they might not have encountered before.

The only thing new, he said, was the manual itself.

“It was most certainly surprising to actually find it [all] documented and detailed as it was,” he said.

“The investigators that work on these types of incidents are seasoned members and really, there’s nothing that they have not really seen and/or experienced — at least up until this point in time.”

Thanks to the manual, there are likely some more arrests in the offing, Waddell said

“This investigation, we are still looking at offshoots to it, so it has not concluded,” he said.

That’s also why the announcement is so delayed, because information was still rolling in over the past few months.

The police service’s drug enforcement unit first launched the investigation in the spring, in response to an increased amount of illicit opioid overdoses.

The raids took place in June at a house on the 500 block of St. Mary Avenue and the 800 block of Waverley Street.

Officers seized more than 700 grams of fentanyl pebbles (fentanyl is often sold as small, coloured pebbles that resemble the candy Nerds) as well as 750 grams of regular fentanyl with an estimated street value of $375,000.

“With the emergence of COVID-19, many individuals are struggling with mental health and addictions issues that result in the use of illicit drugs, such as fentanyl, and often it’s used as a coping mechanism,” said Waddell.

“Unfortunately, that means the number of fatal overdoses are also continuing to rise.”

The fentanyl seized in the latest bust “has potentially saved the lives of thousands,” Waddell said.

He estimates there was enough fentanyl to “infect” up to 7,500 people.