Photo: Young woman who stabbed her newborn baby to death says she did so out of shame because she was not married 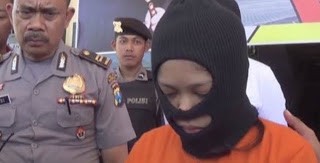 A 24-year-old woman from East Java, Indonesia who committed the unthinkable crime of killing her own newborn baby, told authorities she did so out of shame because she was not married.

According to the police, the woman identified simply as LA, a resident of Trenggalek Regency’s Bandoagung Village, had previously worked in a supermarket in Surabaya but returned to her aunt’s house in the village after she got pregnant for her boyfriend.

She gave birth to a baby boy in the bathroom of her aunt’s house on Wednesday.

“At that moment, LA asked if she could get her some scissors. The homeowner did not know that LA was giving birth in the bathroom,” Trenggalek Police Chief Donny Adityawarman said on Monday as quoted by Tribun.

The scissors were used to cut the baby’s umbilical cord. But police say LA used the same scissors to stab her baby in the chest, penetrating his lungs.

She then put the newborn into a bag of cement mix and threw it behind the house. But LA’s aunt soon grew suspicious that her niece had given birth due to the blood in the bathroom.

Others in the neighborhood heard the sound of crying from behind the house. The baby was found, still alive, and rushed to the local medical center. But the injuries it had sustained were already too great and it died.

Lisa did not resist arrest when the police came for her and she is being detained while her case is being processed. Police say they have enough evidence to convict her but have not yet named the exact charges she will face.

Given a ski mask and brought out to face the media at a police press conference on Monday, LA was asked how she could have done such a thing.

The stigma of zina (the Islamic term for sin of adultery) is so strong in some parts of Indonesia that many girls below the age of 18 get married just to avoid it.