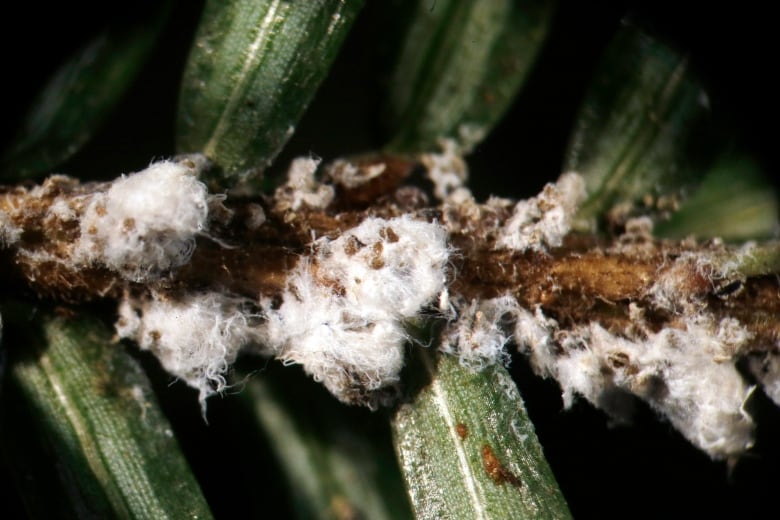 Parks Canada is taking steps to tackle an insect that’s poised to decimate 80 per cent of the eastern hemlocks at Kejimkujik National Park and Historic Site over the next 10 years.

The hemlock woolly adelgid, an insect that measures less than one millimetre as an adult, is wreaking havoc on hemlocks in eastern North America, including in Nova Scotia.

The tiny bugs, native to the Pacific Northwest and Japan, kill trees by attaching themselves to the base of hemlock needles and feeding on sugars, starving the tree of nutrients. While feeding, they produce a woolly-looking substance visible on the underside of the needles.

Some trees at Kejimkujik have already been infested with the adelgid, though the infestation is still in its early stages, and no tree deaths have been documented in the park so far.

Parks Canada wants to ward off more damage by treating some trees in Kejimkujik with insecticide and by changing the makeup of the forest in the park’s main campground, Jeremy’s Bay.

A pilot project planned for this fall would see an insecticide injected into about 1,500 hemlock trees in the Big Dam Lake area of the park in October and November, and about 100 other trees at backcountry campsites and at Jeremy’s Bay.

While the type of insecticide, called a neonicotinoid — known for its adverse effect on pollinators and insect-eating birds — is normally prohibited in national parks, it may be permitted for exceptional uses, according to the impact assessment for the management plan released earlier this month.

Public comments on the proposal will be accepted until Sept. 10.

Trees injected with the product IMA-jet would be permanently marked and monitored. Repeat treatments would likely be needed every five to seven years until other options become available to combat the adelgid, such as biological controls like predators. There are no native predators of hemlock woolly adelgid in eastern North America, as it is an invasive species.

Parks Canada says the insecticide has the potential to leach into surface water and could affect other insects, but the federal agency says those risks will be minimized because it will not be used within 10 metres of a waterbody and because it is an injectable product rather than sprayed.

Hemlock stands prioritized for treatment will include those with greater ecological and cultural value, including those with significance to the Mi’kmaq.

Harvesting and planting trees at campground

Jeremy’s Bay campground, the third busiest in the country after Banff and Jasper based on opening day reservations, will see selective harvesting of hemlocks and planting of other species.

Parks Canada says these strategies are likely to reduce the spread of the adelgid and increase resilience to the insect. They will also reduce the safety risk associated with standing dead trees, including fire risks.

Most felled trees will be left on site to decompose, while others will be used for benches, firewood or for use by the Mi’kmaq.

About 2,000 native tree saplings will be planted this fall, with an additional 4,000 to 6,000 trees planted in the campground over the next few years. Two kilometres of fencing — created using cut hemlocks — will be erected to prevent deer from damaging seedlings.

Kejimkujik is the only national park in the country where a majority of the landscape is also a national historic site, due to its importance to the Mi’kmaq. The park contains habitation sites that pre-date European contact, petroglyphs, a cemetery and harvesting areas.

Some Mi’kmaq use eastern hemlock for tea, and the roots and stems can be used for health treatments, while the bark can be used in a dye.

Parks Canada says its use of insecticide could prevent the Mi’kmaq from safely using the trees for traditional purposes. The federal agency will provide information to Mi’kmaw groups about which trees have been treated with insecticide.

Insect likely to thrive without treatment

Despite the park’s management plan, the vast majority of Kejimkujik’s hemlock trees will not be protected against the adelgid.

Without treatment, the adelgid will continue spreading, and climate change is expected to exacerbate the problem as the insect expands its range. Extreme cold is lethal to the bug.

Eastern hemlock stands are the oldest tree stands in Kejimkujik, containing trees that are up to 300 years old. The species supports wildlife, including birds, deer, porcupines and hawks.