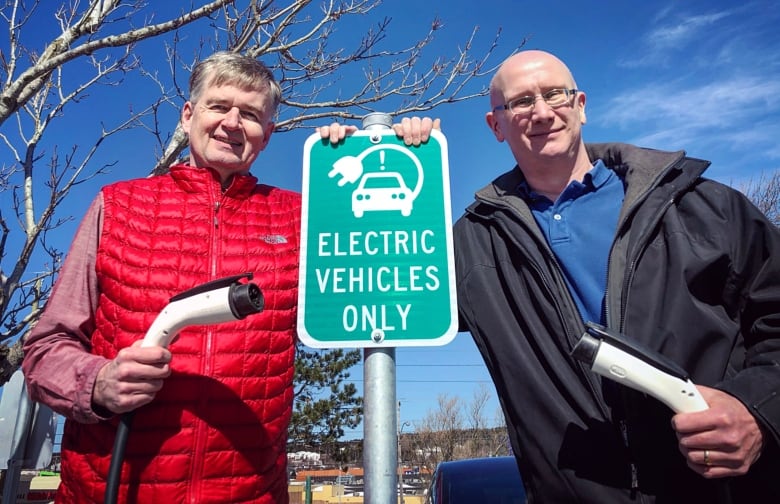 The first electric vehicle fast-charging network is now up and running across Newfoundland, which the province’s main energy provider hopes will make road trips easier for electric car owners and encourage more drivers to go electric in the future.

With the last of the 14 charging stations coming online in Corner Brook earlier this month, drivers now have a place to charge up about every 70 kilometres along the Trans-Canada Highway from Port aux Basques to St. John’s, along with one in Gros Morne National Park.

Jennifer Williams, president & CEO of Newfoundland and Labrador Hydro, says many potential electric vehicle owners have been hesitant to give up on gasoline without fast chargers available across the island.

“The majority of people who were interested in EVs said one of the major barriers to them was indeed not having a fast-charging network that they could access,” she said.

“We really believe that this is going to help people cross over and become an EV owner.”

The charging network was first announced in October 2019, with an eye to having all 14 chargers up and running by the end of 2020. When work began, Newfoundland and Labrador was the only province in Canada without any publicly available Level 3 chargers.

After some COVID-19 pandemic-related delays, the stations are now up and running and can charge most EVs to 80 per cent in less than an hour at a prorated cost of $15 an hour

“The pandemic did have some effect, but we’re there now and we’re really happy and this is just the beginning,” said Williams.

That’s encouraging for Jon Seary, an electric car owner and a co-founder of advocacy group Drive Electric N.L. He says the lack of fast chargers has been the “deal breaker” for many people looking to buy electric vehicles.

“Now you can drive right across the province. You can choose to stop at any of these to top up,” Seary said.

We are at the cusp now of seeing a huge upswing in electric vehicle adoption.– Jon Seary

Joe Butler, who is also a co-founder of the group, says the fast chargers have already made trips easier as they’ve come online across the island.

“In the past, it was a major impediment, really, to get anywhere, but now it’s changed dramatically,” said Butler.

“I just came back from Gros Morne and I had two stops and I was home, so the convenience factor if you just travel occasionally outside of town makes all the difference.”

Seary said according to numbers from provincial motor vehicle registration, there were 195 electric cars on the road at the end of 2020, but he estimates that there are now closer to 300 vehicles in use in the province — with the potential for many more.

“We are at the cusp now of seeing a huge upswing in electric vehicle adoption,” he said.

“The cost of the cars is coming way down, and has come down. More places are selling them and the availability of public charging is becoming a non-issue as we put more and more charging stations out there.”

But Seary said there is still more work to be done to improve the province’s charging infrastructure to catch up with other parts of the country.

“We are lagging the rest of the country,” Seary said.

“We have opportunities for federal funding for our charging infrastructure and it needs to be moving now. We have the surplus from Muskrat Falls to use and we have a climate that’s not going to wait … this is the time to get going with this now.”

Williams said together with Newfoundland Power, N.L. Hydro is now working on 19 more fast chargers to be placed elsewhere in the province and into Labrador.

“We’ve heard very loudly and very clearly from the folks in Labrador, as well as other parts of the province, that they want to have charging stations in their neck of the woods too,” she said.

“Putting them in Labrador, we believe that we’ll help people get over that concern and that fear. There are EV owners in Labrador … so we believe it can work there as well.”

With more chargers and electric vehicles comes less reliance on burning fossil fuels, and Williams said 21 tonnes of greenhouse gas emissions have already been offset with the chargers as they’ve come online over the past few months.

“It actually does equate to as if you had powered a whole house all year, but the important part to remember [is that] these are an enabler. Putting these in place is enabling people to purchase electric vehicles,” she said.

“You do 90 per cent of your charging at home, so if we’re seeing about 20 tonnes has been offset in the short period of time they’ve been in service, for the vehicles that are charging at home, imagine how much they’re actually offsetting. We figure it’s well in excess of 200 tons.”