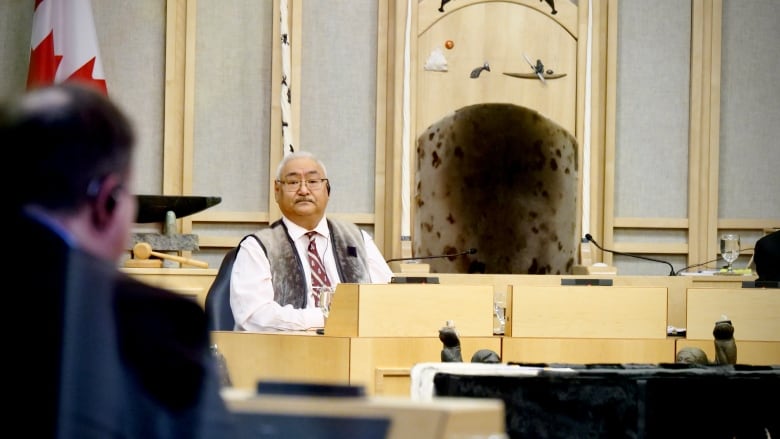 P.J. Akeeagok was chosen as Nunavut’s next premier during the Nunavut Leadership Forum held in the territory’s Legislative Assembly Wednesday.

Akeeagok won the position in a vote by his 22 peers in the assembly. He beat former premier Joe Savikataaq and long-time MLA and minister Lorne Kusugak to become the territory’s sixth premier since 1999, when Nunavut was created.

“I am humbled in front of you,” Akeeagok told the MLAs after his election was announced, also thanking his family. “I look forward to the four years, and we will have a huge load. I will be turning to elders on a constant basis — and to you.”

Akeeagok, 37, now becomes Canada’s youngest current premier, though not the youngest premier Nunavut has seen. That was Paul Okalik, who took the helm in 1999 at age 34.

There are no parties in Nunavut’s consensus government. Instead, during a one-day forum, newly elected MLAs select the premier, Speaker and members of the executive council (cabinet) by secret ballot.

Akeeagok’s election followed more than five hours of questioning by MLAs in the chamber, which was presided over by the new Speaker-elect, Gjoa Haven MLA Tony Akoak.

Akeeagok was first elected to the Nunavut assembly in October to represent the constituency of Iqaluit-Niaqunnguu.

He was nominated for premier by Cambridge Bay MLA Pamela Gross and vowed to pursue a vision of hope and change.

“It’s time for a different way of government,” Akeeagok said in his pitch to MLAs, emphasizing that Nunavut is ready for new leadership.

His Nunavut would be based on collaboration and Nunavummiut’s “shared passion for language, culture and religion,” he said in the assembly.

Akeeagok said young people, such as those who demonstrated in Iqaluit Tuesday asking for action on suicide, are in a crisis. He promised he would seek tangible solutions.

Faced with the announcement this week from Nunavut Tunngavik Inc. that the organization intends to seek some form of Inuit self-government outside the public territorial government, all three candidates said they would seek closer collaboration with Inuit organizations.

The three candidates agreed on most issues, such as housing. All three said the territorial government needs to work with Inuit organizations and mining companies to resolve Nunavut’s housing deficit of more than 3,000 units.

There was also a consensus that Nunavut’s elders must be brought back north for care.

The candidates also agreed suicide prevention should be a priority. Akeeagok said there’s an opportunity to mobilize around prevention with the kind of response put in place to deal with COVID-19.

Akeeagok was born and raised in Grise Fiord and graduated from Nunavut Sivuniksavut. Before running for MLA, he was president of the Qikiqtani Inuit Association for seven years.

Akeeagok wants to grow the economy and create jobs by bolstering sustainable industries.

During the leadership forum, he promised more contact with Nunavut communities.

In response to a question from Iqaluit-Sinaa MLA Janet Pitsiulaaq Brewster about mistakes the candidates might have made, Akeeagok, whose first language is Inuktitut, said he often worried about making mistakes in speaking English.

Akeeagok said his government could be likened to a dog team, which co-operates.

“We will start out at a trot and go faster into the future,” he said.

His cabinet will consist of nine members — the premier and eight ministers, also chosen today — who will be assigned portfolios by the new premier.

A one-day sitting of the sixth legislative assembly takes place on Friday before the legislature breaks until January for standing committee meetings. Its winter sitting is scheduled for February.