Our Love Of ‘All-Natural’ Is Causing A Vanilla Shortage 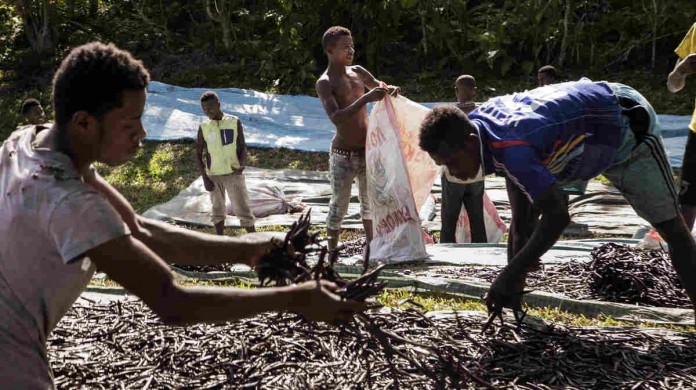 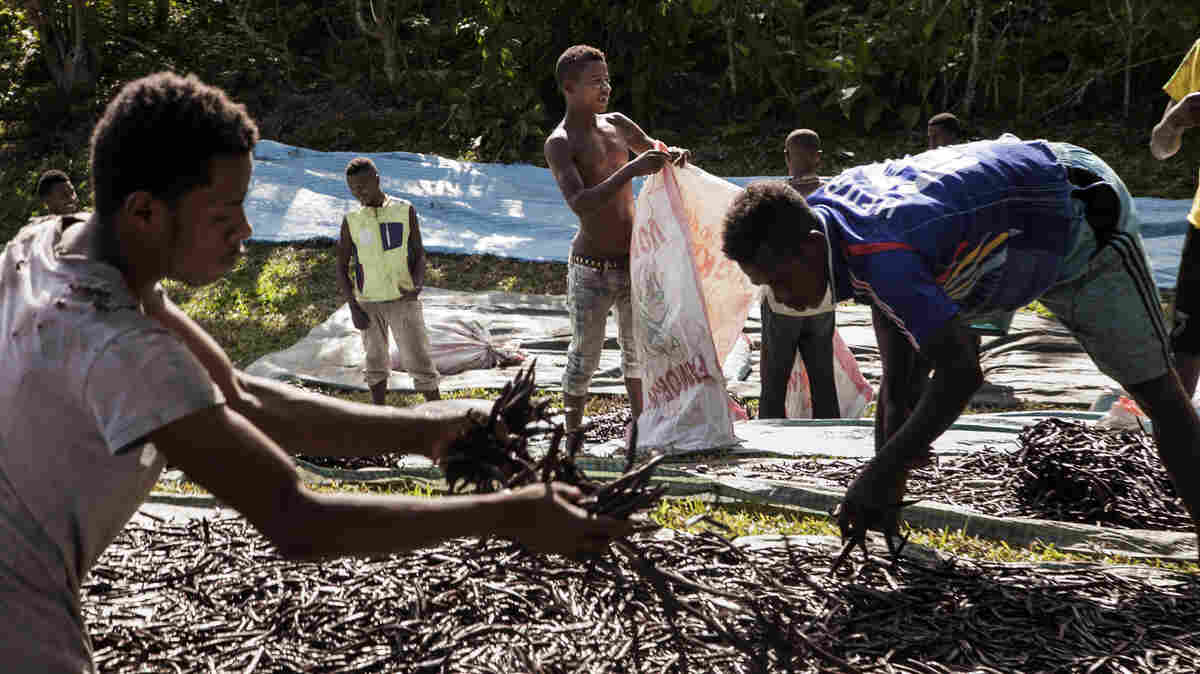 Workers spread “red vanilla” (vanilla which has been treated by a special cooking) in the sun to be dried near Sambava, Madagascar, May 2016. Madagascar, producer of 80 percent of the world’s vanilla, has seen huge jumps in the price of the spice, which is one of the most labor-intensive foods on Earth. Rijasolo/AFP/Getty Images hide caption

Workers spread “red vanilla” (vanilla which has been treated by a special cooking) in the sun to be dried near Sambava, Madagascar, May 2016. Madagascar, producer of 80 percent of the world’s vanilla, has seen huge jumps in the price of the spice, which is one of the most labor-intensive foods on Earth.

Gerry Newman buys vanilla by the gallon. He’s co-owner of Albemarle Baking Company, in Charlottesville, Va., and vanilla goes into everything from his cookies to pastry cream.

A few years ago, each one-gallon bottle of organic, fair-trade vanilla set him back $64. Today, it’s $245, more than Newman can comfortably stomach.

It’s a global phenomenon, hitting pastry chefs and ice cream makers alike. Some have changed their recipes, to use less vanilla. Newman has switched suppliers to find a cheaper product.

“It’s not certified organic. It’s not fair-trade,” he says. “There’s a guilt I have over that, because we’re talking about something that’s all hand labor, and if these people aren’t being treated fairly, it’s really sad.”

To understand the current vanilla crisis, this is the first thing to understand: It’s one of the most labor-intensive foods on Earth.

Vanilla beans are the seeds of an orchid. It grows wild in Mexico, where its flowers are pollinated by birds and insects. Most of the world’s vanilla now is grown in Madagascar, though, where those native pollinators don’t exist. So it has to be done by hand. “Every flower of this orchid has to be fertilized by hand, with a little stick,” says Jürg Brand, who runs a small vanilla business in Madagascar called Premium Spices.

And that’s just the start of it.

After you harvest the seed pods, you soak each one in hot water, “and then you wrap it in woolen blankets for about 48 hours, and then you put it in a wooden box to sweat,” Brand says. Later, the pods are laid out to dry in the sun, but for only one hour each day.

The whole process takes months. It’s so time-consuming and labor-intensive that during the decade that preceded the recent run-up of prices, some farmers simply gave up. Prices for vanilla were so low, it just wasn’t worth the effort. “A lot of farmers abandoned their plantations during this time,” Brand says.

This brings us to the second factor in today’s vanilla crisis. During that period of low prices, a lot of food companies were content to use a synthetic version of vanilla. This factory-made version is composed of a single chemical compound — vanillin — which is the main flavor compound in natural vanilla.

Synthetic vanillin is much cheaper than natural vanilla. On the list of ingredients of, say, packaged cookies, it may show up as vanillin or simply “artificial flavors.”

The vanilla market began to flip when food companies noticed that consumers were avoiding foods with artificial flavors.

“Consumers are reading the labels much more, and they’re demanding all-natural, and even organic,” says Craig Nielsen, co-owner of the company Nielsen-Massey, which makes vanilla the traditional way, from beans.

About three years ago, several huge companies, including Nestle and Hersheys, announced that they were shifting to natural ingredients. Which means they now want vanilla from orchid seeds, not factories.

The problem is, there aren’t enough vanilla-producing orchids. “We don’t have the supply to meet the demand right now,” says Nielsen.

Nielsen-Massey isn’t taking orders from any new customers at the moment, because the supply of vanilla beans is so limited. Food companies — and small-town bakers like Gerry Newman — all are trying to secure a piece of that limited supply, bidding up the price. A bag of vanilla beans in Madagascar now costs more than 10 times what it did five years ago.

Bad news for bakers, though, is great news for vanilla-growing farmers in the coastal regions of Madagascar. “There’s really, really, a lot of cash around in these coastal towns now,” says Jürg Brand.

So much cash is going to pay farmers, in fact, that an odd thing happened during the last vanilla harvest season.

“The national central bank ran out of cash,” says Brand — at least the large bills that vanilla traders use to pay farmers. Farmers don’t trust banks, so they were hoarding that cash at home. “All the money was somewhere on this coastal strip, under mattresses or locked in houses or I don’t know where,” he says.

Brand, who’s been living in Madagascar for the past 25 years, expects the craze to end eventually. Farmers in Madagascar now are rebuilding vanilla plantations as quickly as they can, but it takes four or five years before those orchids start producing seeds.

This past March, there was a big setback: A cyclone hit Madagascar, destroying perhaps a third of the crop, pushing prices up even more.

Vanilla pods are so precious, theft has become a major problem. Farmers are so worried about their crops being stolen directly from their fields that they are harvesting the beans much too early. For vanilla lovers, it’s doubly bad news. Not only are vanilla beans scarce and expensive; the quality is generally quite poor, too.